(Minghui.org) Today’s news from China includes incidents of persecution that took place in 16 cities or counties in 10 provinces, where at least 25 practitioners were recently persecuted for their belief. 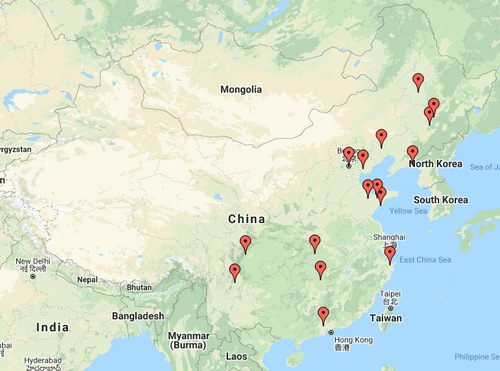 On August 19, 2021, officers from the Zunhua City Court gave Ms. Zhao Guiping, in her 70s, three documents. They told her to attend a court hearing. Ms. Zhao refused.

On August 24, 2021, Guo Yucheng from the 610 Office, together with five officers from the Liaolan Town government, and the Liaolan Police Station, went to the Wanjia Town government. They gave orders to the Party secretaries of various village committees and instructed them to take local Falun Gong practitioners to their town governments and pressure them to sign guarantee statements renouncing Falun Gong. The harassed practitioners included Ms. Qi Ruiying, Ms. Fu Jingxiang, Ms. Zhang in her eighties, and Ms. Xie in her eighties.

Mr. Wang Guangwei and his wife, Ms. Sun Suling, from Landi Village, Nancun Town, were sentenced to a four-and-a-half-year term in 2012. They were repeatedly harassed after being released. Recently, four officers from the 610 Office, the Nancun Town, and the local police station, led by village official Wang Guangping in the Landi Village, went to Mr. Wang’s home. They told the couple to sign guarantee statements renouncing Falun Gong, which they refused to do.

After her home was ransacked by officers from Xiyang Town Police Station, Ms. Dong Liping from Xixiangshui Village, Xiyang Town, Yongji County, was released on bail on January 4, 2021. On August 24, the case against her was turned over to the Chuanying District Procuratorate.

On August 26, 2021, three officers from the Longquan Police Station went to Ms. Liu’s home and asked her if she participated in any Falun Gong activities. The officers photographed Ms. Liu, who is in her 70s, and asked if she still practiced Falun Gong. They also warned her not to post Falun Gong informational stickers. Ms. Liu’s husband could not tolerate the harassment and told them to leave.

On August 24, 2021, the Party secretary and other Longyanjing Community Management Office officers went to Ms. Lin Shunhua’s home. They pressured her to give up practicing Falun Gong, and threatened to turn her case over to the Political and Legal Affairs Committee.

On the afternoon of August 20, 2021, several officers from the Shiyang Police Station went to Ms. Yang Huijun’s home and forcibly arrested her. Ms. Yang’s whereabouts are unknown.

On August 5, 2021, the Shaozihe Township head in Xiuyan County, Anshan City, harassed Mr. Li Jafu as part of the CCP’s “zero out” campaign. They told him to sign statements renouncing Falun Gong, which he refused.

On August 17, five people led by Li Qiang, the Party secretary of the Shaozihe Township, went to Mr. Li’s home again and pressured him to sign the statements. Mr. Li refused to sign.

On August 21, an officer surnamed Yin from the Taoyuan Police Station returned and tried to force Mr. Li to sign the statement. Mr. Li refused again.

Family members of seven Falun Gong practitioners in Harbin City submitted a lawsuit regarding Xue Qiang, a judge at Ranghulu District Court of Daqing City. On June 22, 2021, despite being extremely weak after undergoing surgery, Ms. Tang Zhuyin, a 70-year-old resident of Harbin City, was forced to go to the Ranghulu District Court in a wheelchair. She was still wearing a drainage bag from the surgery.

Her lawyers Mr. Huang Hanzhong and Mr. Song Yusheng, were harassed by the local judicial bureau and Judge Xue Qiang.

On April 9, 2021, more than twelve officers from the Tianhe District Domestic Security Division and the Shipai Police Station searched Mr. Zeng Xingyang’s store and home. They arrested Mr. Zeng Xingyang, his wife Ms. Deng Fang, and his sister Ms. Zeng Yueling and took them to the Tianhe District Detention Center. On August 2, 2021, their cases were turned over to the Haizhu District Procuratorate.

On August 3, 2021, officers from the Qiaoguan Police Station and the Community Management Office in Changle County went to Mr. Qin Xueqing’s home and forcibly arrested him. Mr. Qin was taken to the Jingshan Reservoir brainwashing center. Mr. Qin was released that day.

The next day, officers from the Qiaoguan Police Station went to Mr. Qin Xueqing’s home again. They attempted to arrest his wife, Ms. Liu Xiuqin, but she was not at home.

On August 18, 2021, Ms. Li Zhihong and Ms. Liu Yuhua from the Shuangta District, Chaoyang City, were reported to the police while talking to people about Falun Gong. Officers from the Beita Police Department arrested them. Due to the results of the physical examination, the detention center refused to take Ms. Li Zhihong. Ms. Liu Yuhua was detained.

On August 27, 2021, Ms. Zheng Aiyin and Ms. Li Caijun from Yuyao City were forcibly taken from their homes by two officers from the sub-district Administration Office. It was said that they were taken to a brainwashing center.

On August 17, 2021, officers from the Huancheng Township Police Station went to Mr. Chu Tongchun’s home in Fujia Village and threatened him. Mr. Chu did not cooperate. They said they would return in three days.

In May 2021, Mr. Yang Jun from the Furong District was arrested. He is being held in the Changsha No. 1 Detention Center.