(Minghui.org) A Jinhua City, Zhejiang Province resident was secretly sentenced to prison after he was arrested for not renouncing Falun Gong.

Mr. Zhu Zuoliang, 52, was approached by Cao Linwei of the local residential committee on April 19, 2021, who ordered him to sign a statement to renounce Falun Gong. Mr. Zhu refused to comply and tried to explain to Cao that he didn’t do anything wrong in practicing his faith. Cao threatened to take him to the local brainwashing center or prison if he insisted on practicing Falun Gong.

Four officers of the Dongguan Police Station found Mr. Zhu the next day and again ordered him to sign the statement. He refused and was arrested shortly after. His home was also ransacked.

Mr. Zhu was tried by a local court on July 20, 2021, and sentenced to 4 or 5 years. The exact prison term remains to be investigated. He is now detained at the Jinhua Detention Center and denied family visits.

Mr. Zhu began to practice Falun Gong in 1996. For upholding his faith after the persecution started, he has been arrested numerous times and incarcerated for a total of 6.5 years.

Locked in a Cage

Mr. Zhu was arrested in October 2000 in Nanning City, Guangxi Province. While at the Nanning City Detention Center, the guards kept him in a cage, where he was unable to fully stand up or squat down. The guards also arranged people to see him, in order to humiliate him. He was later transferred to the Hangzhou City Detention Center in Zhejiang and detained there for another month. 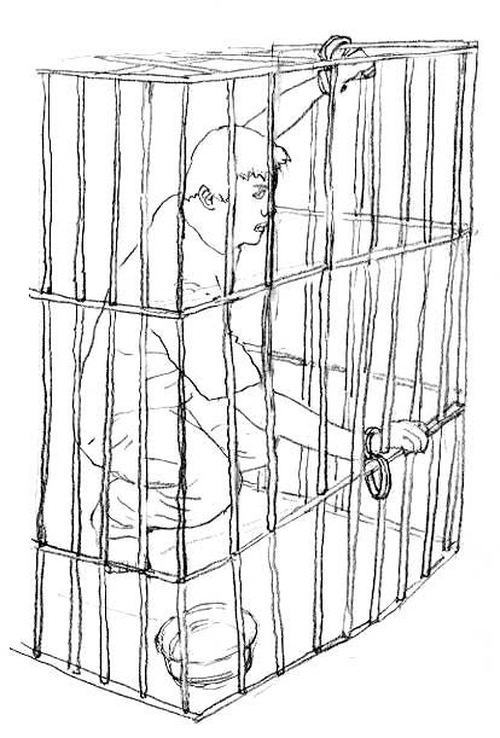 Torture illustration: locked in a cage

Mr. Zhu was arrested again in Jinhua City on January 26, 2001, after being deceived into going to the police station to apply for a residence permit. He was taken to the Hangzhou City Lockup, where he was forced to make handbags and other products without pay.

Mr. Zhu was later given two years at the Shiliping Forced Labor Camp. Three months into his detention, the guards brought him from the workshop, where he was making lighters, to a torture room. They tied his hands and feet to a “tiger chair.” 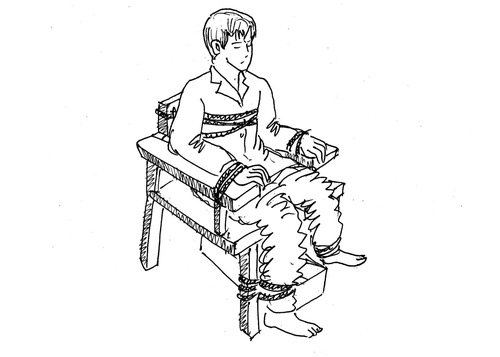 On the seat near the back, a metal tube was inserted. Once a person sat on it, it wouldpush against one’s tailbone, causing extreme pain. There was an additional tube placed horizontally under one’s thighs and near the knee. When one sits up to avoid touching the metal tube on the back, most of one’s weight would fall on the horizontal tube, which would also cause pain to one’s thighs.

While Mr. Zhu was tied up in the tiger chair, he was deprived of sleep and given very little food. The guards forbade him from using the restroom and forced him to relieve himself in his pants. Four inmates took turns monitoring him. As long as he closed his eyes, they poured water over him, beat him, verbally abused him, or inserted things into his nose and ears.

Mr. Zhu held a hunger strike to protest the persecution a day later and was force-fed four days later. After being tied up in the tiger chair for six days, he was finally let off.

In order to force Mr. Zhu to renounce Falun Gong, the guards also held him in solitary confinement without heat in the winter (after taking away his winter jacket), deprived him of sleep, and forced him to watch materials demonizing Falun Gong and write thought reports.

Mr. Zhu was arrested one more time on October 13, 2014. He was first held at the Shuanglong Brainwashing Center and then taken to the Jinhua City Detention Center. He was later sentenced to 4.5 years and taken to the Zhejiang Province No.4 Prison on January 6, 2016.