(Minghui.org) Today's news from China includes incidents of persecution that took place in 16 cities or counties in 7 provinces, where at least 44 practitioners were recently persecuted for their belief. 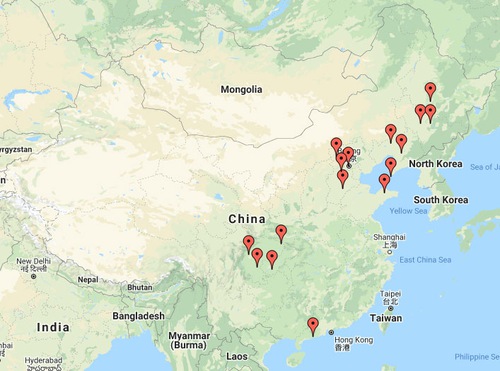 Mr. Zhang Bingjun from Chenji Village and Ms. Zhang Sumei from Daxizhuang Village, Cuimiao Town, Fucheng County, were reported to the police for talking to people about Falun Gong in Matou Town on the morning of November 11, 2020. They were arrested by officers from the Matou Town Police Station. Their homes were ransacked. They have been held in the Hengshui City Detention Center.

Both practitioners were tried via video link by the Jing County Court on August 26, 2021. The court did not let them hire lawyers and did not allow their family members to attend the hearing.

Ms. Wei Shujie has been held in the Harbin City No. 2 Detention Center since September 22, 2020. She will be tried by the Daowai District Court on September 5, 2021.

Ms. Su Caiyun and Ms. Cui Feng from Fumeng County were arrested by Changyingzi Police Station officers on March 29, 2021. They were held in the Xindi Detention Center.

It was reported on August 23, 2021, that Ms. Su’s case was turned over to the procuratorate. Ms. Cui’s current situation is unknown.

In August 2021, some police stations in the Taocheng District continued to carry out the “zero-out” campaign targeting Falun Gong practitioners. Quite a few practitioners were harassed as follows:

Liu Lanying, Chen Minghua, and Zhang Qingshen were harassed by officers from the Renmin Road Police Station on August 9.

Zhang Tieliang and Wang Caifeng were harassed by the officers on the morning of August 20. Wang was harassed three times.

Ms. Gao Qindong was harassed by officers from the Kangfu Street Police Station.

In mid-April 2021, Ms. Jia Shumei, in her 50s, from Majiatuan Village went to her son’s home in Jinan City to take care of her daughter-in-law, who was to deliver a baby. Ms. Jia was reported to the police for talking to people about Falun Gong at a farmers’ market. She was arrested by police officers in the Changqing District, Jinan City. Her son’s home was ransacked and all the Falun Dafa books were confiscated. Ms. Jia was taken to the Zhonggong Detention Center.

Zhou Xingkui, deputy director of the Shuanghe Town Police Station, and others broke into practitioner Li’s home in Miaoling Village on June 28, 2021. They confiscated a copy of Zhuan Falun and stickers that had “Falun Dafa is good” printed on them.

Ms. Zhang Yujie, her husband Mr. Liu Xingguang, Mr. Zhang Fengcheng, and Ms. Qi Shuyan returned home from a detention center in May 2021 even though they had been given prison sentences.

Ms. Zhang and her husband Mr. Liu were each sentenced to two years in prison and fined 5,000 yuan. Their daughter was fined 2,000 yuan. They have to report to the local Xinqiu Police Station regularly. Officers take pictures and video them once every two weeks.

Mr. Zhang and Ms. Qi were each sentenced to one year in prison, scheduled to end on August 15. They were released early and returned home.

Ms. Shao Xiubo is from Suzigou Town, Youyan County. The police ransacked her home on the morning of August 10, 2021. They confiscated all her Falun Dafa books and photos of the founder of Falun Gong. She was arrested that evening.

Cheng Zhengjun, who is the head of Leiyin Village in Tianpeng Town, led officers from Fanjiang Road Police Station to harass Ms. Zhang Tianyu on the morning of September 1, 2021. They pressured her to renounce Falun Gong, coerced her daughter to sign a guarantee statement on her behalf, and then forced her to give her fingerprints.

Since June 2021, four Falun Gong practitioners in the urban area have been harassed over the phone by the Wanyuan City Justice Agency, Political and Legal Affairs Committee, Police Department, and State Security Department as part of the “Zero-out” campaign.

In early June when Mr. Hu Xiaojiang, 47, was working in a mobile phone shop, he was harassed over the phone by a staff member of the justice agency.

In early June when Mr. Wu Sheng, 48, was at work, officers with the municipal police department called and asked him numerous questions.

On the morning of June 2, Lei Xianggang, head of the state security division, and several others knocked on 77-year-old Ms. Yang Yongxiu’s door. They intended to ransack her home and arrest her, but Ms. Yang’s husband Mr. Wu Liguo stopped them.

Mr. Gao Jiajian, 48, was harassed over the phone by a staff member of the justice agency on the morning of June 12. He was asked if he was still practicing Falun Gong.

On the morning of June 12, Mr. Hu Yu, a 49-year-old Wanyuan Middle School teacher, received a call from the judicial agency at home. He was asked if he was still practicing Falun Gong. On the afternoon of July 15, six people from the Wanyuan City Propaganda Department and the Wanyuan City Culture and Education Bureau knocked on the door and entered Mr. Hu’s home. They pressured and tried to coax him into signing paperwork as part of the “zero-out” campaign.

Two plainclothes officers from the township police station, along with village officials Tian Runping and Tian Hailiang, went to Mr. Zhao Chunlin’s home on August 16. They took pictures and asked him if he was still practicing Falun Gong. The officers also went to the homes of practitioners Guo Xiuying, Yan Qingjia, Zhao Fulin, Tian Chunxiang, Zhao Guilin, and Zhao Huizhi. They asked the practitioners if they were still practicing Falun Gong and threatened them that, if they did not stop, it would have an adverse impact their children’s education and employment, up to three generations down the road.

On August 23, 2021, just after Ms. Gong Ailian returned home, a police officer harassed her, videotaped her, and asked her if she was still practicing Falun Gong.

Ms. Li Huanying has been missing for nearly a month. In the previous “zero-out” campaign, Ms. Li was repeatedly harassed at home by staff members of the sub-district administration and community management office.

Mr. Ren Haifei will be tried via video link by the Ganjingzi District Court on the afternoon on September 8, 2021.