Mr. Guo lives in Minxiong Township, Taiwan, and has operated a trucking business for over forty years. He retired a couple years ago and due to irregular eating habits from his trucking business, he developed gastrointestinal problems. Mr. Guo was diagnosed with colon cancer in early 2019, when he had a lot of blood in his stool. The doctors told him that he had second stage colon cancer and by May of 2019, Mr. Guo had undergone surgery and chemotherapy. Not long after, Mr. Guo entered the fourth stage of colon cancer and it had already spread to his lungs. Mr. Guo had no energy after undergoing another surgical procedure in his lungs. 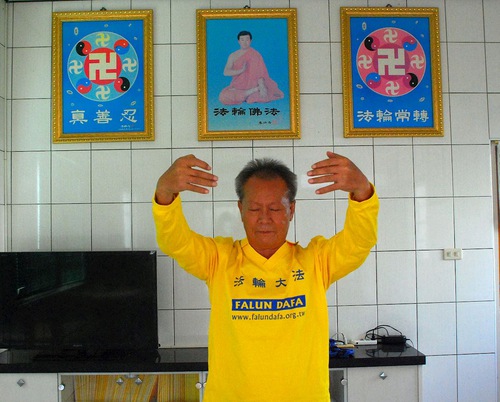 One morning in 2020, Mr. Guo saw a Falun Dafa banner and a group of people practicing the Falun Dafa exercises. He thought the exercises looked very relaxing, so he inquired about the practice. A practitioner told him that he could follow along. Though his body felt weak and he had trouble breathing through his nose because of the lung surgery, Mr. Guo persisted in practicing the exercises while breathing through his mouth. He consistently woke up at 4 a.m. to do one hour of standing exercises and meditate for an hour in the afternoon, then studied the Fa for an hour. Gradually, he saw changes in his mind and body. His skin color turned from a blackish complexion into a fair, rosy one.

The first time Mr. Guo tried the exercises out, he felt a large energy field and said, “I will practice Falun Dafa from now on.”

He was still getting regular checkups for his colon cancer and his illnesses did not bother him as much. He said, “After studying the Fa, I learned that illnesses occur because of our karma.” Mr. Guo’s health improved as each day passed, which helped spur his confidence in the practice.

Mr. Guo attended a seminar in mid 2020. Master Li Hongzhi’s nine-day lecture videos from China were played, and practitioners corrected his exercises movements. He was able to understand more about Falun Dafa and other practitioners would often encourage him. Mr. Guo was touched and said, “I need to be more diligent.”

Thank You, Master, for Showing Me the Right Path

Mr. Guo quit smoking and drinking after starting cultivation and his xinxing improved. He said, “I would get agitated easily in the past when others criticized me. I learned to look inward when my wife or others pointed out my shortcomings. When my son misbehaves, I would teach him with reason instead of getting upset.” Seeing other practitioners selflessly help him improve on the path of cultivation, Mr. Guo is full of gratitude and determination to be more diligent. 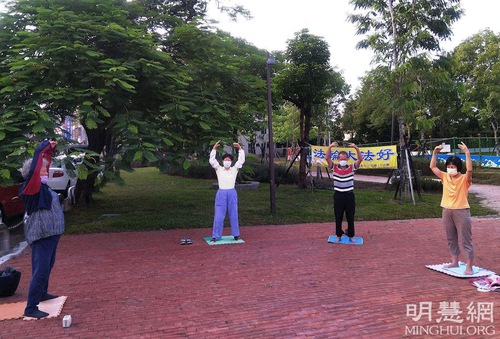 Mr. Guo is now in charge of bringing banners to the group practice site and often arrives early and leaves late. He said happily, “Thank you, Master, for showing me the righteous path. I will abide by Master’s standards to genuinely cultivate.” He added, “I hope that my wife and son will take up the practice, too.”