(Minghui.org) Today's news from China includes incidents of persecution that took place in 20 cities or counties in 11 provinces, where at least 36 practitioners were recently persecuted for their belief. 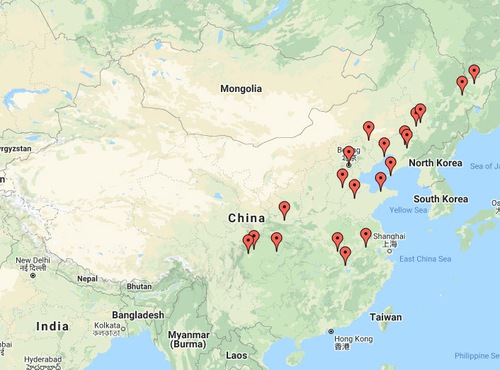 Ms. Cui Guixian, 57, and Ms. Liu Dongying, 55, were each sentenced to seven years in prison on February 7, 2020. They were taken to the Jilin Province Women’s Prison on May 27, 2021. Their families were not allowed to visit them.

Their families received a call from the prison on July 24, 2021, and were told that they could visit the practitioners in prison on July 29, 2021. During the visit, both practitioners’ families noticed they were about 10kg thinner than when they were detained in the detention center. Inmates stood behind the practitioners during the visit. Ms. Cui was afraid to say anything and kept looking at the inmate behind her in a panic. Ms. Liu was also afraid to say anything—only that she had a high blood pressure which was over 200 mmHg and that she took anti-hypertensive drugs every day.

The case against Ms. Gao Hua and Mr. Wang Yandong was submitted to the Lianshan District Procuratorate on July 27, 2021. Mr. Wang’s lawyer met him in the Suizhong Detention Center on August 2, 2021, and then went to the procuratorate to view the case files. The lawyer communicated with the persecutor and submitted the related materials.

Ms. Gao Hua and Mr. Wang Yandong were arrested by officers from the Suizhong County Domestic Security Division on April 24, 2021.

The family members of Zhang Jun (gender unknown) went to the Dengshahe Police Station on the morning of August 2, 2021. They only got back some of Zhang’s personal belongings that the police confiscated. When they inquired about Zhang’s situation, they were told that Zhang had been placed under official arrest by the Jinzhou Procuratorate on July 22, 2021.

About 15 people from the Huashan District Domestic Security Division, the Huashan Police Station and the local community office, went to 78-year-old Ms. Li Xia’s home on the morning of August 3, 2021. They ransacked her home and confiscated keepsakes, USB drives, the photo of Falun Gong’s founder, and other items. Ms. Liu was taken to the Huashan District Police Department. She refused to sign any documents. Her son was called in and was pressured to sign on behalf of his mother. Ms. Liu was released around 4 p.m. in the afternoon and was placed under residential surveillance.

Three people including Deng from the Macheng 610 Office and Zhong, deputy of the Longchiqiao Police Station, went to Mr. Liu Xing’s home on the morning of June 16, 2021. They ransacked and searched the entire house but found nothing.

Led by village official Xiao Yinfei, officers from Guangdegong Town in Wengniuteqi went to Mr. Wang Zhanxiang’s home on August 5, 2021. They videotaped his home and searched it. They did not find anything.

Ms. Liu Xinlian from Dazhu County was arrested by officers form the Beiqu Police Station when she talked to people about Falun Gong on July 30, 2021. Ms. Liu is currently detained in the Dazhu County Detention Center.

Officers from the Heping Road Police Station harassed multiple practitioners from July 15 to 28, 2021. The harassed practitioners are Wang Suorong, Wang Huizhe, Han Xiuqin, Zhang Huajuan, and Lao Chen. Some were harassed at home. Other practitioners and their family members received harassing calls. The practitioners were pressured to give up practicing Falun Gong. They all refused to comply.

Judge Yang Song’s assistant from the Economic and Technological Development Zone Court called Ms. Liu Gangli’s family on August 4, 2021, stating that if they paid a fine of 10,000 yuan, the sentence could be reduced—otherwise there would be no reduction.

Ms. Jiang Yuzhi from Yumin Township was arrested on the morning of August 4, 2021.

Ms. An Xiuyun in her 60s and Ms. Li Huizhi, 68, were reported to police for distributing truth-clarifying materials in the Fuguijiayuan Community on the afternoon of August 3, 2021. Liu Yanchang, head of the Criminal Investigation Division of Fujin City Police Department and officer Tian Xiaoyu arrested both practitioners. They were placed under 10-day detention. Ms. An Xiuyun was taking care of her son’s daughter and her daughter’s son alone while her son and her daughter work in other places. The children are around 10 years old and were left unattended. The police went to both practitioners’ homes around 6 or 7 p.m. and ransacked their homes. Their Falun Gong books and other related personal belongings were confiscated.

Five practitioners from Yanqing District including Ms. Wu Fangling and Ms. Yang Jingxiang were arrested on June 28, 2021. Four of them were placed under official arrest by the procuratorate. One was released due to their physical condition.

Ms. Zhang was detained in the Kunming Road Police Station in Xi’an City that night. She was taken to have a physical examination and a nucleic acid test on the morning of August 23, 2021. She was taken to a detention center around 6 p.m. that evening.

Mr. Li Feipeng was arrested at home on October 15, 2020. He has been detained for ten months. He is currently held in the Benxi City Detention Center.

Officer Huang from the Xinzao Police Station in Gaoxin District and Yang Kaiwu, head of the local community, went to harass Mr. Sun Renzhi on July 19, 2021. Mr. Sun was pressured to sign a guarantee statement to renounce Falun Gong, which he refused.

Ms. Jiang Wenping from Yongxing Town of Gaoxin District received a call from the local neighborhood committee, saying that the district officials would come to check whether she still practiced Falun Gong.

Officer Zhou Jun from the Xinzao Police Station in Gaoxin District and other officers went to Mr. Sun Houze’s appliance repair shop just before April 25, 2021. He pressured Mr. Sun to sign a guarantee statement, but Mr. Sun refused. The deputy from the Xinzao Police Station went to Mr. Sun’s shop on June 27, 2021. After not seeing Mr. Sun, he called him to harass him. Mr. Sun was also harassed by police officers and village officials last year.

Officer Li Chao from the Puming Police Station in Gaoxin District called Ms. Yang Min’s husband on the morning of July 28, 2021. He asked whether Ms. Yang Min was at home and wanted to come to talk to Ms. Yang. Li Chao called again that afternoon.

Elderly practitioner Mr. Wang Yancai was harassed by officers from the Yongxing Police Station in the Gaoxin District and local community staff members in July 2021. They demanded he return the pension that he had received during his two detentions in the labor camp, which totaled about 100,000 yuan; otherwise he had to sign a guarantee statement. Mr. Wang refused.

Mr. Zhou Hongwen from Shiyipu was also harassed and pressured to sign a guarantee statement, which he refused.

Ms. Wu Qingxiu lives in the Luowan Community in Mengyang Street. She was harassed at home by the head of the community Chen Yan around 8 p.m., on August 2, 2021. Ms. Wu was told to go to the community office to verify her ID. Ms. Wu refused to cooperate.

Ms. Wei Chunrong, 70, was detained in the Shandong Province Women’s Prison for three years and three months. She was released on August 4, 2021.

Ms. Zhang Peimei was harassed by three officers from the Yanzhuang Police Station in the Gangcheng District on the evening of June 18, 2021. She was pressured to sign a guarantee statement and was threatened with her children’s schooling. Ms. Zhang refused to sign.

Ms. Tan Beihong, who works in the Jiujiang Petrochemical Plant, was arrested by officers from the Dongjiao District Police Department on June 5, 2021. Her home was ransacked. The police confiscated all her Falun Gong books, computer, USB cards, media player, etc. They forged her signature on the transcript. Ms. Tan was detained for 15 days in the detention house.

Since then, Ms. Tan’s husband was pressured to cooperate with police and to make Ms. Tan give up her practice of Falun Gong. Her Internet was closely monitored and would be cut off if a VPN connection was detected.

Ms. Chi Ruimei lives in Shagou Village, Biguo Town. Her husband Mr. Wang Huayang left home because of the persecution and had lost contact with her for nine years. Ms. Chi has been constantly harassed by the 610 Office and the Zhaoyuan City Political and Legal Affairs Committee. Her home was under surveillance and her phone was bugged.

Starting on August 1, 2021, Jin Guangyao from the Biguo Town 610 Office and Xu Jianzheng from the Zhaoyuan City Brainwashing Center went to Ms. Chi’s home to harass her for several consecutive days.