(Minghui.org) Today's news from China includes incidents of persecution that took place in 20 cities or counties in 12 provinces, where at least 27 practitioners were recently persecuted for their belief. 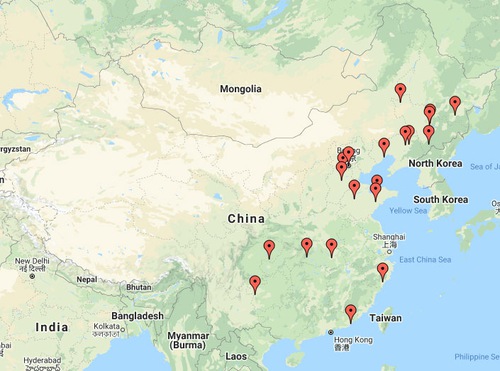 Ms. Wang Jiemei, a retired teacher, was reported to the police for talking to people about Falun Gong on February 21, 2021, and was arrested. The case against her was brought to the Court of Economic and Technological Development Zone on June 21. The court notfied her family that she would be tried in the near future.

Ms. Song Shuhua and her husband Mr. Li Guolin from the Nanqiulan Village, Mingyi Township, were detained for 15 days by June 30, 2021. Their family members went to the detention center that day to pick them up. The detention center told them the couple would be released the following day. Officers from the Yongyang Police Station ransacked the couple’s home again on the afternoon of June 30.

On the morning of July 1, when the family went to pick up the couple again, they learned that the detention center had taken Ms. Song to the Baoding Detention Center, and Mr. Li was transferred to the Laishui Detention Center.

The police also demanded 130 yuan from the couple’s son to cover a shortfall in living expenses. They listed all the confiscated items as criminal evidence in an attempt to bring up charges against the couple, and to pressure their son to sign paperwork. The couple have been officially placed under arrest.

Mr. Wu Renfei from Mayu Town, Rui’an City, was released on bail on the morning of June 28, 2021, after being detained for a week. He had to pay a deposit of 5,000 yuan before the police released him.

During Mr. Wu Renfei’s detention, Wu Jiangru (gender unknown), also from Mayu Town, called officer Chen Zhao to clarify the truth and was instead taken to the Mayu Town Police Station for questioning and pressured to sign paperwork.

Officers from the Harqin Zuoyi County Domestic Security Division knocked on the door of Ms. Zhao Haiqin’s home in Jianchang County, on July 5, 2021, and tried to arrest her but failed. Until July 9, the officers were staked out outside the building where she lived.

They told her that an undisclosed document issued by the Chinese Communist Party (CCP) central committee outlined three measures to be taken against Falun Gong practitioners:

Since May 2021, officers from the Dazhi Street Police Station in Jiang’an District knocked on the doors of, harassed, and arrested several Falun Gong practitioners in the area.

In addition to Ms. Chen Tongfang, whose whereabouts are unknown, Ms. Zhu Chunfeng was also forced to leave home with her over 80-year-old husband who had suffered a stroke. The couple’s whereabouts are also unknown.

Zhu Baoshun, director of the Chengqiang Police Station, Jiangyuan District, and more than twelve officers, including Li Yi, broke into the home of Mr. Zhang Gongchang and his wife Gong Qiumin on the morning of June 9, 2021. The officers ransacked the place and confiscated a computer, a USB drive, a cell phone, photos of Falun Gong’s founder, Falun Gong books, and about 2,000 yuan in cash. The couple was taken to the Baishan Detention Center for 15 days of detention.

After the couple was released on June 24, they stayed with their relatives. Deputy director Yang Guang and other officers from the Zhengcha Police Station and community management staff members went to the home of the couple’s relatives and harassed them.

Ms. Zhang Yuyan was arrested at work on the morning of June 9, 2021. Subsequently the police went to her home and confiscated Falun Dafa books and other items. Ms. Zhang was detained for seven days.

The family of Ding Bo (gender unknown) was harassed over the phone by Huo Lixin, a staff member of the community management office, on May 27, 2021. As a result, Ding’s mother suffered a heart attack.

Shi Minyao (gender unknown) from Shijia Village, Zhuqiao Town, was reported to the police for talking to people about Falun Gong at a farmers’ market on July 8, 2021. Shi was arrested and taken to the Dianzi Brainwashing Center.

Officers from the Shuanghe Town Police Station broke into the home of Li Lirong's (gender unknown) home on June 16, 2021. Without showing any IDs, they ransacked the place and confiscated a Falun Gong book.

Ms. Heng Xiangxiang was reported to the police for talking to people about Falun Gong at work on June 24, 2021. She was arrested by officers from the Nanhu Police Station, Heping District. While she was held in the police station, she developed severe diabetes symptoms and her blood sugar level was very high, over 360 mg/dL (or 20 mmol/L). She was taken to the Shenyang City No. 1 Detention Center on July 2.

Ms. Fu Zhaocui in Hailin City was questioned and pressured to sign paperwork by Ding Yuhua, head of the Hailin City Domestic Security Division, and others. She did not cooperate. She returned home three hours later.

Mr. Wang Zhili, who is disabled, was harassed at home by officers from the Jiangzhuang Police Station on June 17 and July 2, 2021. The officers photographed him and recorded him on video.

Mr. Duan Huaijun was arrested at home in early June 2021. He has not yet returned home.

His sister Ms. Duan Huaiyan was arrested and is being held in the Liupanshui City No. 1 Detention Center.

At the end of June 2021, Ye Bing (chief of the Pinghu Police Department) instructed Zhou Xiangdong (head of the Pinghu Domestic Security Division), officers from the Xiba Police Station, staff members of the Xiba Sub-district Administration Office, and staff members of the community management office to go to the Three Gorges Expressway Management Office. They took Mr. Liu Jianjiang, who was at work, to the Wujiagang Brainwashing Center.

Ms. Wu Fangling and Ms. Yang Jingxia were placed in criminal detention and are being held in the Changping Detention Center. Ms. Yang was taken there on June 28, 2021, and she has been on a hunger strike since then.

Mr. Wang Xianhui from Linshui County was arrested by officers from the Linshui County Domestic Security Division on May 20, 2021. He was officially placed under arrest and is being held in a detention center. The officers confiscated an inkjet printer, a laser printer, a laptop, and printed materials.

Ms. Ding Xiuzhen was taken to the Li County Hospital by officers from the Li County Domestic Security Division in April 2021 for a physical examination. She was released due to high blood pressure.

Afterwards, domestic security officers called her work unit, Li County Education Bureau Special Education School, and put pressure on the school officials. The principal talked to her on numerous occasions and took her to the county education department in an attempt to force her to give up practicing Falun Gong.

The persecution by Wang Hui, head of the domestic security division, the education department officials, among others, resulted in severe conflicts in her family. Her husband and children were frightened. They in turn put a lot of pressure on her and kept an eye on her to prevent her from going out.

Community management officials in the Yanjiang Sub-district went to Mr. Dong Dianqing’s home three times and his son’s home twice on March 8, 2021. They asked if the Falun Gong informational stickers in the hallway were posted by them. Mr. Dong’s wife Ms. Yuan Xiuxia did not answer directly. Later Mr. Dong said, “We didn’t post them.” A month later these people came to Mr. Dong’s home again to harass them.