(Minghui.org) “Since Minghui Weekly was first published, we have never stopped distributing it in Hong Kong,” said Mr. Zhang, who coordinates distributing truth clarification materials there.

Minghui Weekly is affiliated with the Minghui website and all the articles come from the website. It was first published in 2005. There is an edition for China and one for overseas. Minghui Weekly aims to help everyone in society understand the truth about Falun Dafa, and its contents include the persecution cases of Falun Dafa practitioners in China, basic facts about the persecution (the staged self-immolation in Tiananmen Square, the April 25 peaceful appeal in 1999, the Chinese Communist Party’s (CCP) slanderous paper “1400 Cases,” persecution data, etc.), as well as Falun Dafa practitioners’ understandings and how they put into practice the principles of Truthfulness-Compassion-Forbearance and their sharing and views on the nature of the universe and life. 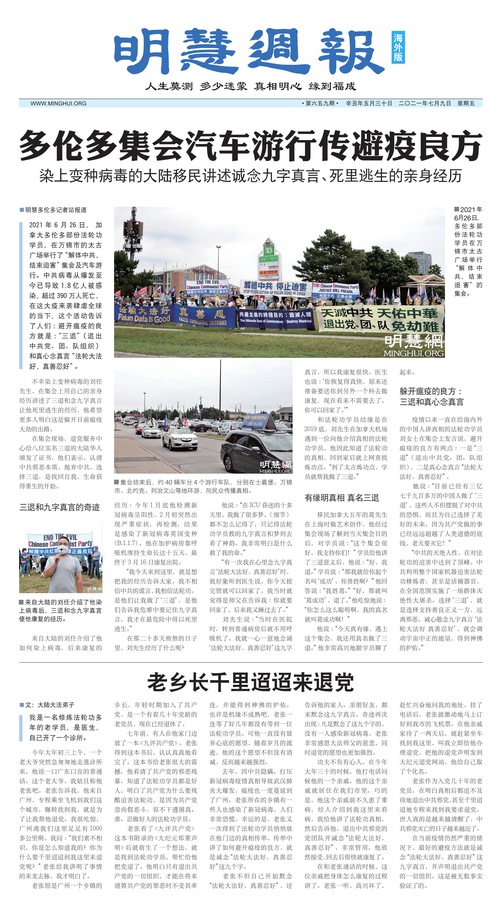 Mr. Zhang mentioned that at first, most Hong Kong people did not know much about Falun Dafa; some even thought that Falun Dafa was involved in politics. So, in the beginning, few people were willing to accept Minghui Weekly. However, the periodical is very thorough in clarifying the facts. As long as one is willing to take a look at it, gradually he or she will be attracted by its contents and will start to enjoy reading it.

Mr. Zhang said that some people became more and more interested in reading Minghui Weekly and came to look for the new issue every week; some even came to Kowloon’s truth-clarification site all the way from Hong Kong Island, just to get the latest issue of Minghui Weekly; some ask for several more for their friends and families.

One elderly lady had an amazing experience. She told Mr. Zhang, “I had to wear glasses when I read the newspaper, and I could only read for half an hour before my eyes began to hurt. However, I never had a problem reading Minghui Weekly. I can read it as long as I’d like and I don’t even need to wear glasses!”

Mr. Zhang said, “We distribute Minghui Weekly in Hong Kong every week. It has made a great impact in clarifying the truth in Hong Kong. Especially between 2017 and 2019, many readers found our bookstore after reading Minghui Weekly and they bought Zhuan Falun. Some were even tourists from China. They were not afraid of being persecuted by the CCP. They came to buy the books and then took them back to China.” Mr. Zhang said that compared to other materials, Minghui Weekly has a more direct style in exposing the persecution and talking about the beauty of Falun Dafa cultivation. “This newspaper directly clarifies the truth and awakens sentient beings. Thus, it is not the easiest one to distribute. But things change with time and our perseverance, and it is a test of our patience and determination during the process. Many people noticed our persistence and their views on us changed from negative to being fully supportive and even admiring us.”

Mr. Zhang gave an example. A lady lived in Tuen Mun. At first, she always tore up the newspaper on the spot and angrily cursed at Falun Dafa practitioners. However, the practitioners were not moved and continued to talk with her. After many days passed, she began to read Minghui Weekly and to everyone’s surprise, her daughter eventually became a Dafa practitioner. The lady told us, “There was a story in Minghui Weekly about a pregnant woman. Her doctor told her the baby she was carrying had died. But her mother-in-law told her to recite ‘Falun Dafa is good,’ and in the end, she successfully gave birth and the baby was very healthy. This made me remember that my daughter was born with one blind eye. So I bought the book Zhuan Falun, and now my daughter also practices Falun Dafa.”

Mr. Zhang said, “Many people listened to the CCP’s lies and at first, they didn’t know about all the details about the persecution and they cursed at us. But many of them saw us day after day. Gradually they were willing to talk to us and learn more about Falun Dafa and the persecution. Eventually, they became very supportive of us.” Since the Umbrella Movement (Hong Kong protests), the people are gradually realizing the true nature of the CCP. When the Anti-Extradition Law Amendment Bill Movement began, even more people became supportive of Falun Dafa.

During this recent movement, Mr. Zhang noticed a lady who took Minghui Weekly and stood there for quite a while. Mr. Zhang patiently clarified the facts to her and she broke into tears. She said, “I now understand. I must apologize to all the Falun Dafa practitioners! In the past, I always opposed you and thought that you were involved in politics. But now I know how great you guys are. The CCP persecutes Falun Dafa and takes organs from live practitioners. I believe you. Practitioners are at this truth-clarification site 365 days a year, and I used to think you are seizing this spot. I even wanted to sue you for that. But now I totally understand. I will tell my lawyer friends that we must help you. Falun Dafa is good.” She wept as she spoke. 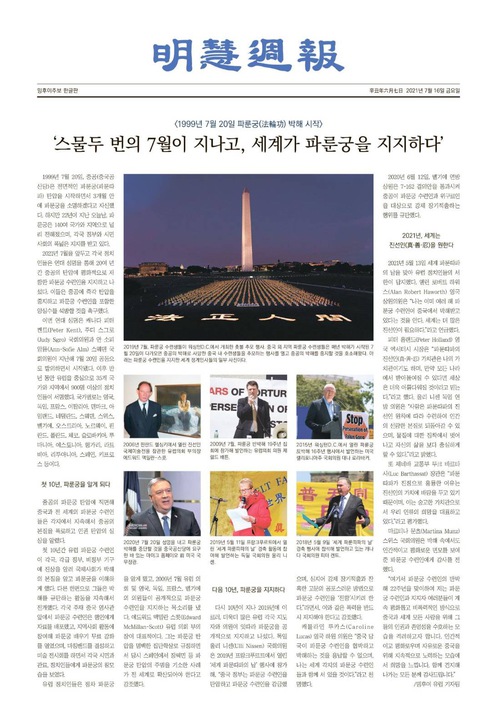 Ms. Zhang said that there was a person from China who was of Korean ethnicity. After reading two issues of Minghui Weekly, he said, “This content is so good. I feel so great after reading it and I was very touched.” He also asked, “How was this newspaper made? I often smell a light fragrant scent when I read it.”

Many people read the Falun Dafa cultivation stories in Minhui Weekly and then signed up to attend the Nine-Day Falun Dafa Class held in the Tianti Bookstore.

Mr. Cui Changwan is 64 years old. After attending the Nine Day class in July, he shared his story on the last day, “I coincidentally saw Minghui Weekly on a bench. I was curious after reading it, so I came to Tianti Bookstore and registered for the Nine Day class.” That issue of Minghui Weekly had an interview about a Falun Dafa practitioner Jin Qingri, who has worked as a show producer and an author for a TV station for over 30 years.

“After reading his interview, I was most impressed with the part when his career wasn’t going well, and then he got sick, but he found inner peace through Falun Dafa cultivation.” Every day, Mr. Cui was always the first one to arrive at the class. He said, “I always feel so comfortable when I enter the bookstore. During the class every day, my mind always felt very peaceful and calm.”

Ms. Yin Xiaoting, who also attended the Nine Day class mentioned that she became interested in Falun Dafa after reading about a Korean practitioner’s cultivation experience published in Minghui Weekly.

Ms. Tai Shuling from Taiwan first learned about Dafa after someone gave her a copy of Minghui Weekly on her way to work. She said that her first impression was this newspaper was very pure. “I was working in a foreign company at the time. Many co-workers fought for gain and fame and it was very hard to be a good person.”

As she continued to read Minghui Weekly she gradually noticed the cultivation content. She then went to the Minghui website to learn more about Falun Dafa, and she saw that practitioners seek to become better people among good people. Ms. Tai said, “I felt it was difficult enough to just be a good person. How could there be better people among good people? I was curious and I went to the Falun Dafa exercise site to learn more about it. At the time, there were many fake qigong schools in Taiwan. I thought that I could just leave if it was fake. Then, just like that, I began to practice Falun Dafa.”

Ms. Tai was able to break through much of her fear mentality after she began practicing. She said, “If I didn’t practice Falun Dafa, I would not be as confident as I am. I would probably have gotten depressed. I would be constantly in fear and be unsure of the future. In the past, I was the type of person who always backed off when facing challenges. Whenever I encountered a problem at work, I never wanted to actively face it. After I began cultivation, I tried to guide myself with the principles of Truthfulness-Compassion-Forbearance. I could feel the positive energy because I knew what was the right thing to do. This helped me to be courageous when I encountered challenges.”