Member of Australian Parliament: The Perpetrators of Organ Harvesting Must Be Brought to Justice

(Minghui.org) Falun Gong practitioners held activities in downtown Brisbane on Brisbane Square on July 17 and King George Square on July 20, 2021, to mark 22 years of persecution by the Chinese Communist Party (CCP). George Christensen, a Member of the Australian Parliament, traveled from North Queensland to participate in the event on July 20 and show his support. 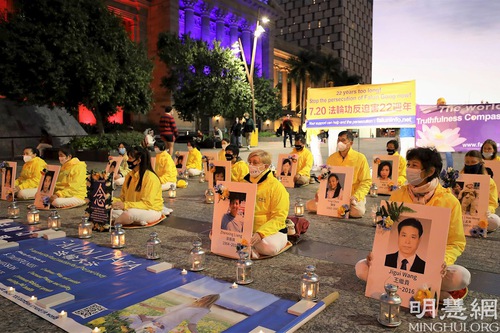 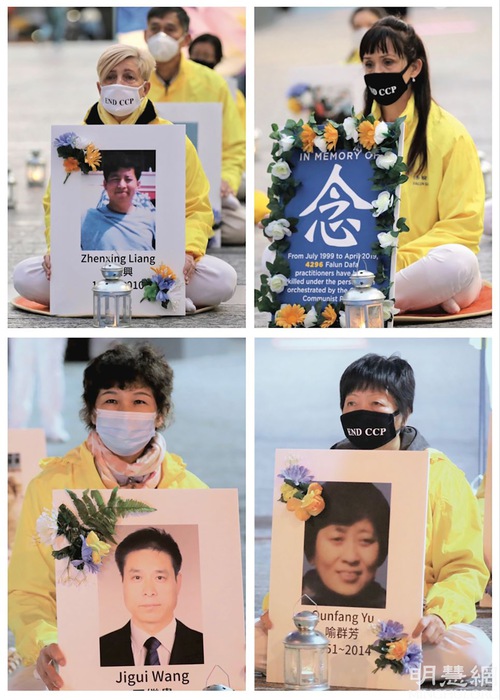 Falun Gong practitioners held a candlelight vigil in King George Square in Brisbane in the evening of July 20, 2021, to commemorate 22 years of persecution in China

Falun Gong practitioners held a candlelight vigil in King George Square in central Brisbane during the evening of July 20, 2021. They sat next to one another with candles to mourn practitioners who were tortured to death during the CCP’s suppression of Falun Gong.

Mr. Christensen thanked practitioners for their persistent efforts to resist the persecution in China. “I think Members of Parliament and Senators do take the plight of Falun Dafa practitioners very seriously. We have had allegations of human organ harvesting that have a very high level of proof, and that is absolutely a human rights abuse,” he said. 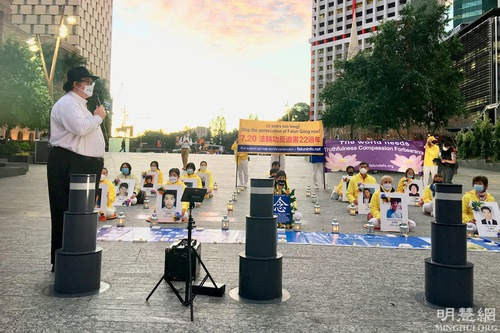 Mr. George Christensen, a Member of the Australian Parliament, spoke at the candlelight vigil on July 20, 2021

“This is very important, very important to be part of the light, a light shining here for those people who lost their lives under the unfortunate suppression of the CCP regime. The Falun Dafa practitioners who were taken and killed, who were organ harvested--this is a crime against humanity, and perpetrators of those crimes need to be called out," he said.

“I truly commend everything you have done here. Today, I see portraits of Falun Gong practitioners who were killed for their beliefs, there are even photos of infants. I feel very sad. This regime is so shameful and terrifying. It is a transnational criminal organization,” he said.

“Thank you very much for what you are doing here in shining a light on this evil, evil regime. I will just say to all of those Falun Dafa practitioners in Brisbane, in Australia–thank you for keeping that memory alive. More power to you and here is hoping you can end the CCP sometime soon,” he said.

Vietnamese Community Representative: We Must Stop the CCP from Violating Human Rights 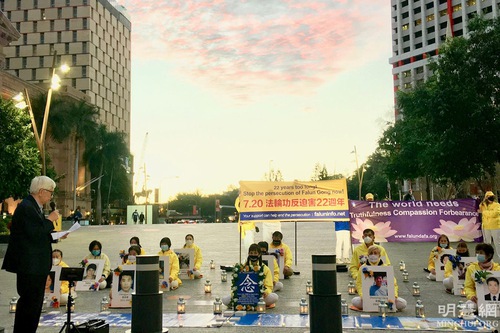 Dr. Cuong Bui, President of the Vietnamese Community in Australia’s Queensland Chapter, spoke at the candlelight vigil on July 20, 2021

President of the Queensland Chapter of the Vietnamese Community in Australia, Dr. Cuong Bui, is an experienced doctor and an advocate for human rights. Dr. Cuong Bui learned of the CCP’s brutal suppression of Falun Gong practitioners in China in 2000. He has been very sympathetic since then, and very supportive of practitioners' efforts to resist the persecution.

“The persecution has gone on for 22 years,” he said in his speech at the vigil. “All the leaders in the G7 summit condemned Beijing for its violation of human rights in its treatment of Falun Gong practitioners and Hong Kong citizens.

“All G7 leaders agree that the CCP is a very bold security challenge. You can see that during the last 22 years, nobody knows exactly how many practitioners there are who died under the CCP police.”

Human Rights Activist: Inspiring that Practitioners Hold to Their Principles 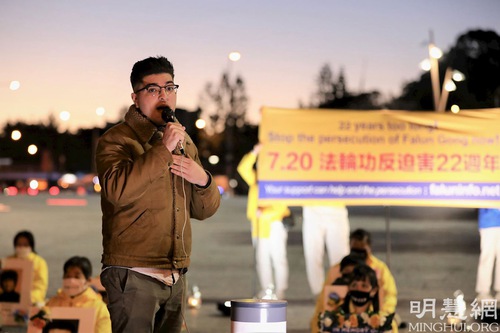 Drew Pavlou, a student at the University of Queensland, spoke at the candlelight vigil

Drew Pavlou, a human rights activist and philosophy student at the University of Queensland, spoke at the rally.

“We have seen independent human rights organizations like Human RightsWatch investigate these terrible, terrible crimes,” he said in his speech. “There is substantial evidence that the CCP has carried out organ harvesting on a massive scale against Falun Dafa practitioners.

“This peaceful religious group has been persecuted simply for holding their religious beliefs. Millions were imprisoned and the CCP executed untold thousands for the illegal organ trade. This is absolutely contrary to the principles of humanity. This goes completely against the heart of any person. This is true evil.

“We are talking about systematic organ harvesting, genocide, systematic persecution, the likes of which the world has scarcely seen since the Holocaust. This is what peaceful Falun Dafa practitioners have experienced for two decades now.

“It is so, so inspiring to see that this group continues to maintain its principles, speak up peacefully against the CCP, resist. They never have given into the CCP’s terrible, terrible persecution, even when they have taken family members, tortured people on a tremendous scale, executed simply for their religious beliefs.”

Representative of the Hong Kong International Alliance: People Should Resist the CCP 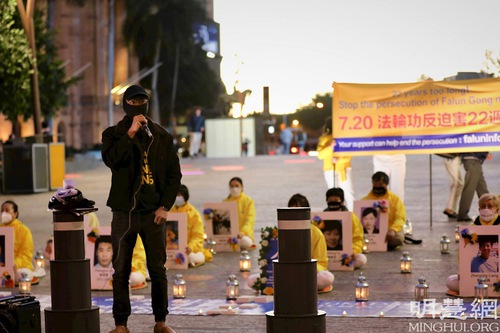 Jacob attended the candlelight vigil representing the Hong Kong International Alliance. In his speech, he condemned the CCP for its crimes of organ harvesting.

“It is our job and responsibility to educate our next generations of the true history of how the CCP has been destroying our lives, the lives of Falun Gong people, or any other Chinese dissidents like the Uighurs, the Baptists,” he said.

“What we should do right now is to push the Australian Government to pass a Magnitsky Act. That will be a similar act like in the US. That will hold those responsible government officials overseas like in China, CCP officials responsible for the crimes against humanity,” he said. 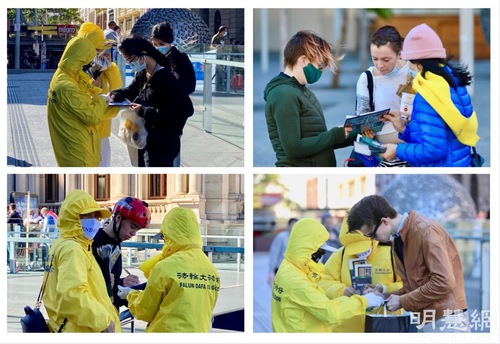 Cuban Migrant: Communist Ideology Has Brought Disaster to the World

Mr. Yuniel moved to Australia from Cuba nine years ago. He said he is very sympathetic to Falun Gong practitioners for enduring 22 years of persecution. He expressed admiration and support for practitioners’ peaceful, rational resistance.

“Communist ideology has brought disaster to China, Cuba and the world. Cuba has suffered a lot from Communist ideology and socialist rule. Everyone should stand up and oppose Communism, and end its rule,” he said.

Not only did he sign the petition, he also asked his wife and several other Cubans to sign it as well.

Freelance Writer: The Whole World Should Say No to the CCP 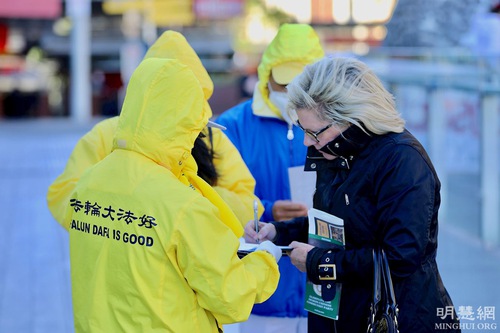 Tanya Seley, a freelance writer, signed the petition to support Falun Gong practitioners' efforts to end the persecution in China

Tanya Seley is a freelance writer who writes columns for newspapers and magazines. She accepted some materials from practitioners and stood reading the display boards. She listened to practitioners' personal accounts of being persecuted in China.

A practitioner named Da Wei told Ms. Seley about how he and his wife were illegally sent to labor camps and tortured for practicing Falun Gong in China. Dai Wei was shocked with electric batons by six police officers for nearly an hour. His wife’s limbs were shackled to a death bed for about two months.

The couple were arrested for their belief in 2008, just before the Beijing Olympics, leaving their 17-month-old daughter with no one to take care of her.

Ms. Seley was shocked and furious to hear what Dai Wei and his wife had gone through in China. She said that Falun Gong promotes ‘Truthfulness-Compassion- Forbearance,’ and the CCP’s persecution is unacceptable and must end immediately. She also said the CCP is a threat to the whole world and everyone in the world should reject it.