(Minghui.org) Falun Gong practitioners in St. Louis, Missouri held a candlelight vigil by the Creve Coeur lake on the evening of July 19, 2021, to commemorate practitioners in China who have lost their lives in the two-decade-long persecution of their faith and calling on the international community to work together to end the persecution. 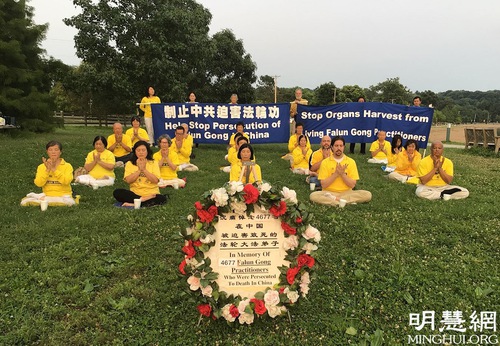 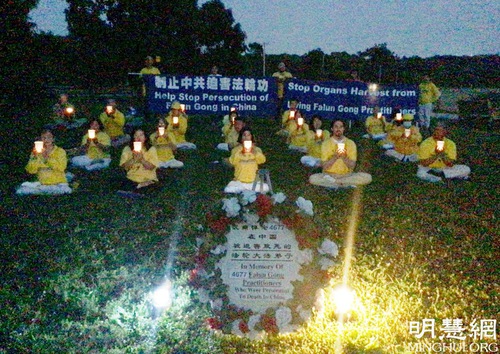 Falun Gong practitioners in St. Louis, Missouri held a candlelight vigil on July 19, 2021, to commemorate practitioners in China who have lost their lives in the persecution of their faith by the Chinese Communist Party.

July 20, 2021, marked the 22nd anniversary of the onset of the persecution of Falun Gong by the Chinese Communist Party. Several practitioners who attended the vigil were persecuted in China before moving to the U.S. Despite their incarceration and torture, they remain firm in their faith and persist in bringing the world’s attention to the persecution.

Choosing “Truthfulness, Compassion, Forbearance” in the Face of Death

Mr. Geng Sa, a research scientist, had his PhD degree suspended by the Institute of Botany under the Chinese Academy of Sciences. When he later found a job at Henan Normal University, the school barred him from teaching and doing research upon finding out that he practiced Falun Gong. They reduced and later completely suspended his salary. Even now, the school administration still keeps the power and water supply of his apartment in China completely cut off, preventing him from renting or selling the apartment.

While Mr. Geng survived the brutal torture himself, his wife, Ms. Guan Ge, was tortured to death in the Shibalihe Forced Labor Camp.

Widowed and unable to live a normal life in China, Mr. Geng moved to the U.S. and started a new life. Recalling the past 22 years, he said, “After much searching, I finally found Falun Gong, and my life was fulfilling and happy. When the Chinese Communist Party ordered the persecution, I struggled. I thought about what to do for a long time. In the end, I thought to myself: Truthfulness, Compassion, Forbearance is the root of my life and something I can’t live without. I have no choice but to uphold these principles.

“When I was on the verge of death myself, when I saw my first wife’s body, and when I became totally desperate about my future, the thought to uphold my faith also became stronger. It’s my basic right to practice my faith, and I did nothing wrong in believing in Truthfulness, Compassion, Forbearance.”

Raising Awareness Until the Day the Persecution Stops

Ms. Tian works at an agricultural company in the U.S. When the persecution suddenly started on July 20, 1999, she had been practicing Falun Gong for just a year. She couldn’t understand why such a spiritual discipline teaching people to be good would be persecuted. News kept coming of practitioners being arrested and tortured in China. She felt she needed to do something to help stop it. So a few days after the onset of the persecution, she and several practitioners other drove to Washington, D.C. to appeal outside the Chinese Embassy.

She saw many other practitioners from around the U.S. They peacefully gathered and hoped the staff members inside the embassy to hear their voice. But no one ever came out to talk to them.

“After that, we began to organize events to raise awareness of the persecution to the U.S. government and the general public. It has become an annual tradition for me to go to Washington, D.C. to join the events, calling for an end to the persecution,” she said.

Having just come back from Washington, D.C. a few days ago, Ms. Tian said she felt more and more people have now understood the evil nature of the Chinese Communist Party and stand with the Chinese people to fight for their human rights.

Ms. Tian said she is glad to see that the U.S. State Department sanctioned a Chinese police officer and a director of the 610 Office for their role in the persecution. There is also a bill introduced in the U.S. Congress to combat the crime of forced organ harvesting of Falun Gong practitioners and another House Resolution being considered that condemns the Chinese Communist Party’s bloody killing and totalitarian rule over the past century.

She said the persecution of Falun Gong is a complete failure and that the Chinese Communist Party simply can’t use violence or tyranny to change people’s minds. She looks forward to the day when the persecution stops, but before that day comes, she will not stop raising awareness of the persecution, she said. 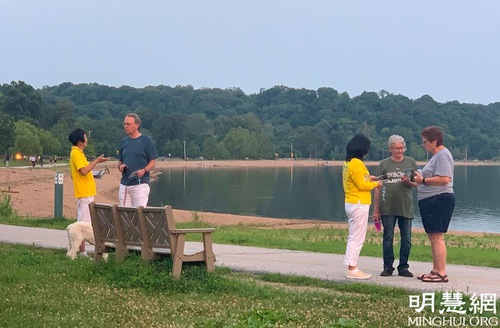 Practitioners talk to passersby about the persecution of Falun Gong in China.

The practitioners’ candlelight vigil also attracted many local residents who were taking a walk by the lake. Many were shocked to hear about the persecution, including the CCP’s state-sanctioned killing of Falun Gong practitioners for organs. They said the persecution should be stopped immediately and the perpetrators should be brought to justice.