(Minghui.org) This year marks 22 years that the Chinese Communist Party (CCP) has persecuted the spiritual practice, Falun Dafa. On July 18, 2021, more than 1,000 practitioners held a parade in Brooklyn, home to the third-largest Chinese community in New York. They informed people about the ongoing atrocities and urged the Chinese people to renounce their membership in the CCP and its affiliated organizations. During the event, 417 people quit the CCP. 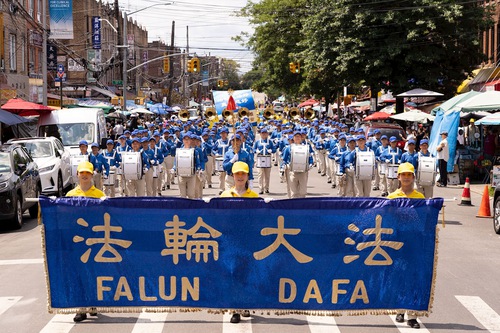 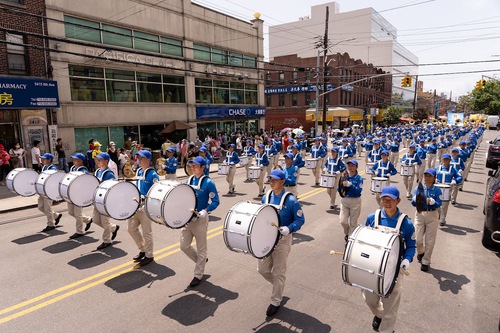 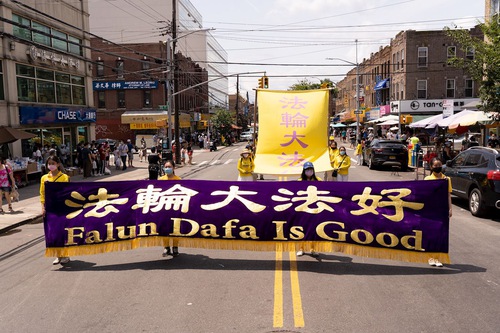 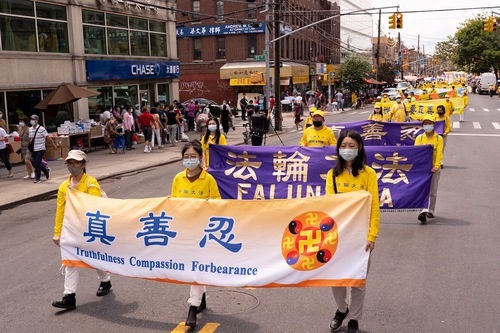 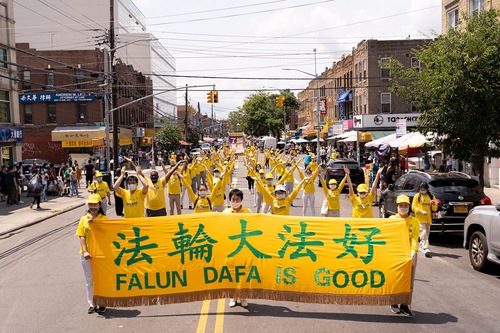 Practitioners held a grand parade on July 18, 2021, in Brooklyn to call for an end to the 22 years of brutal persecution in China.

With the Tian Guo Marching Band leading the parade and the section on “Quitting the CCP” at the end, the parade extended the entire length of the Chinese community on Eighth Avenue. Many people stopped to watch and took photos or video recordings of the event. Several people praised the practitioners and said, “The parade is very grand!”

The parade was divided into three themes: “Falun Dafa Is Good,” “Stop the Persecution of Falun Gong” and “Celebrate the 380 Million Brave Chinese Who Quit The CCP.”

The first theme was “Falun Dafa Is Good” Led by the Tian Guo Marching Band, uplifting music could be heard along the main streets and small alleys along Eighth Avenue. Giant, upright banners with messages on the beauty of this self- cultivation practice were especially eye-catching in the bright sun. 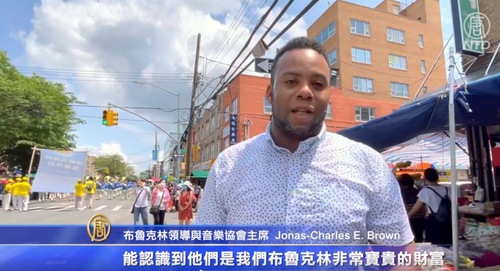 Jonas-Charles E. Brown, who is President of the Brooklyn Music and Leadership Institute, said: “This parade represents Chinese culture, from the ancient east until today. It helps those who have never seen such parades realize this is a precious asset of Brooklyn.”

Termy, another spectator, said, “They are able to practice their faith here, it is a great thing.” 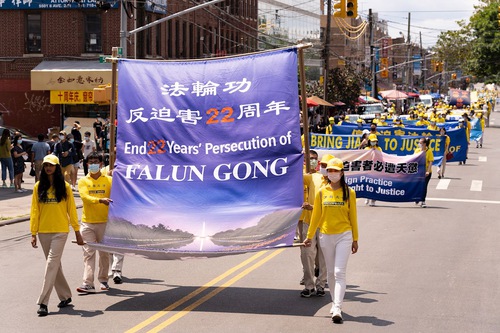 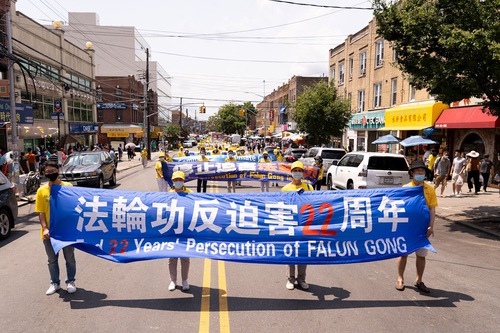 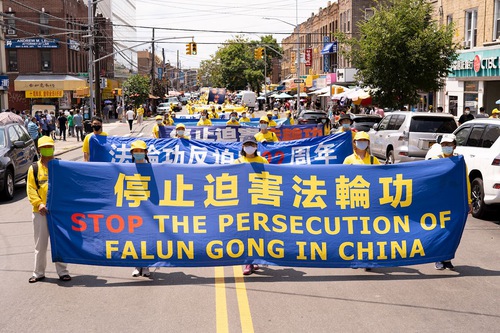 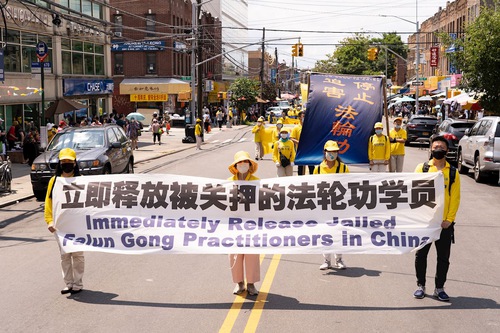 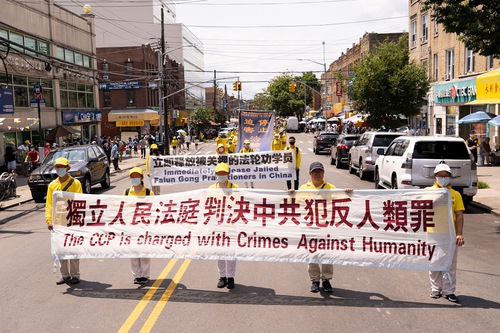 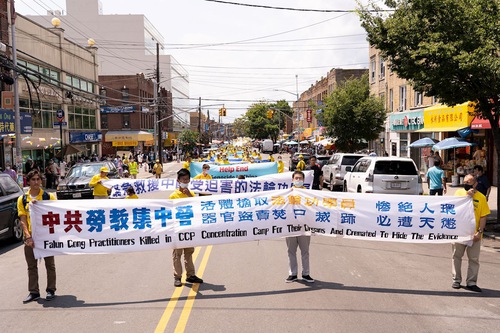 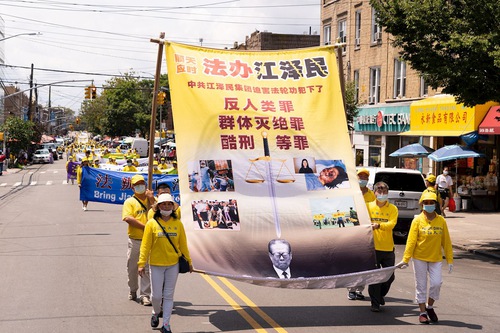 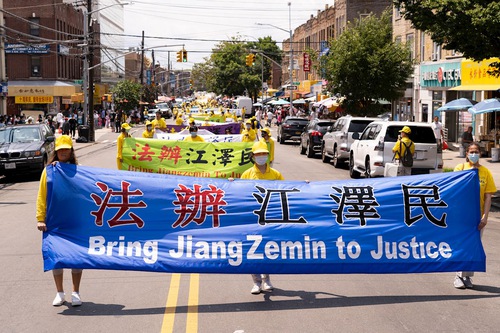 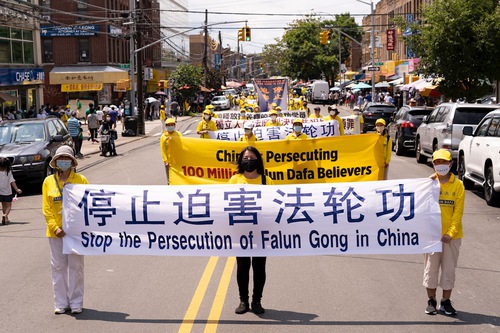 Falun Gong practitioners held a parade in Brooklyn to call for an end to 22 years of persecution in China.

The second theme “Stop Persecuting Falun Gong” consisted of banners telling people of the terrible crimes against humanity committed by the CCP.

Since the CCP launched its repression of Falun Dafa on July 20, 1999, according to incomplete statistics by the Falun Dafa Information Center, in the first half of 2021, an estimated 13,000 Falun Gong practitioners were harassed and arrested by the regime.

Chen Zhengda, a Falun Gong practitioner who participated in the parade, is one of the CCP’s victims. He said, “I was arrested many times. Each time, I was brutally beaten. In 2013, I was restrained on a tiger bench and interrogated for over 40 hours.” 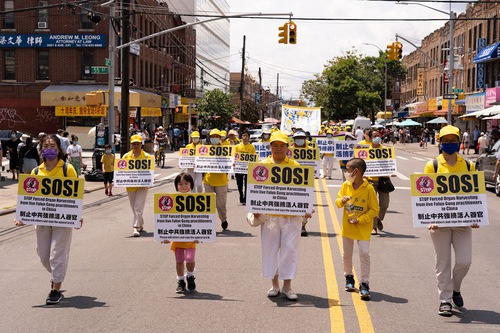 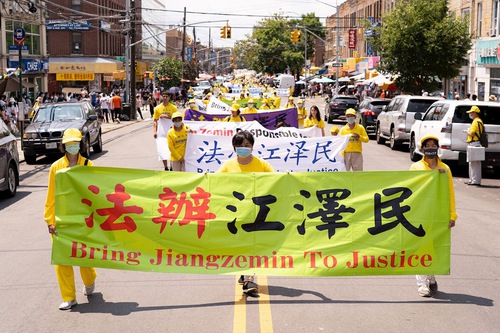 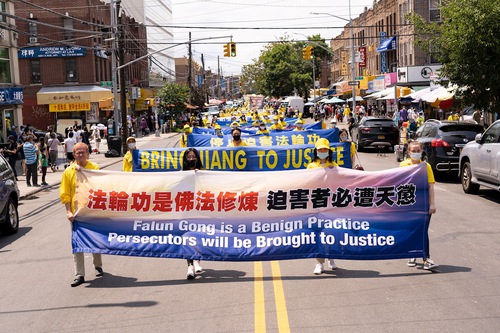 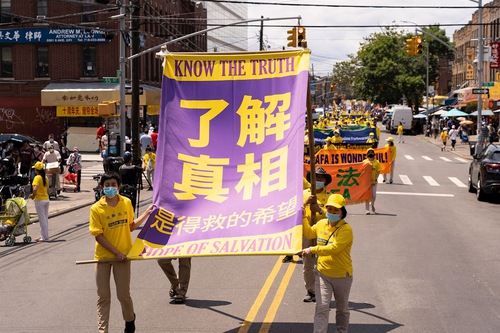 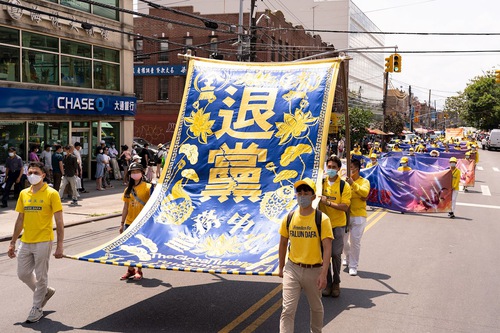 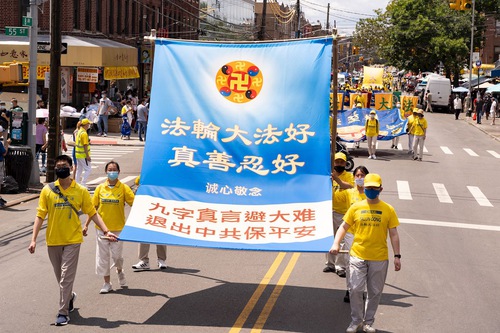 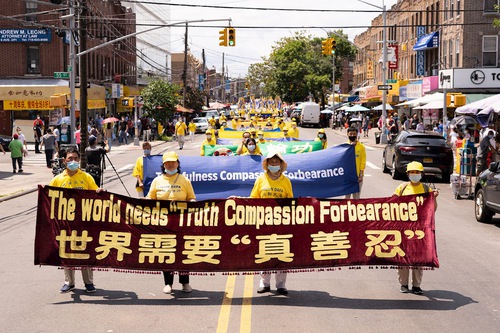 A parade was held on Brooklyn’s Eighth Avenue to mark 22 years of persecution.

The third theme “End the CCP, Support the 380 Million Chinese Who Quit the Party and Its Organizations” is a reflection of the current, global anti-CCP sentiment.

Yi Rong, President of the Global Quit the CCP Center, said, “For 22 years, the CCP mobilized the power of the entire country in its genocide against Falun Gong and forced the removal of their organs. The CCP has broken up countless families, killing countless practitioners—leaving behind many orphans. I call on the Chinese people in Brooklyn to stand up and openly oppose the persecution, quit the CCP and its affiliated associations.”

Bai Jiemin, President of the Chinese Democracy & Human Rights Alliance East U.S. Branch, said, “Falun Gong pursues ‘Truthfulness, Compassion, Forbearance.’ This is excellent, very healthy and beneficial. It is a form of belief after all. The CCP wants to suppress this. As democracy activists overseas, we absolutely cannot agree to this. We definitely stand on the side of Falun Gong.”

Wu Xiang, a democracy activist and Falun Gong supporter, said, “I completely agree with Falun Gong. For example: ‘Quit the CCP, Heaven Will Eliminate the CCP.’

Man from Hong Kong: I See Hope in Practitioners' Courage

Mr. Charles Yao moved to the U.S. from Hong Kong 38 years ago. He heard the sound of drums from afar and hurried over to watch the parade, exclaiming, “The parade is at its peak!”

He said he was pained by the CCP’s tyranny in Hong Kong. “We are Chinese people and hope for China's good. But I can only identify with China’s several thousand years of traditional culture—it's beautiful mountains and landscapes—not the CCP’s deceitful rule,” he said.

Mr. Yao emphasized, “We must persist. Everyone’s will to fight and people’s awakening is important—we must choose to stand on the side of justice. If you give up, then there is nothing. When I look at Falun Dafa practitioners' courage, I see hope. The truth will always stand, evil cannot triumph over justice.”

Young Man from Fujian: People Have No Rights in China

Brooklyn is home to the third-largest Chinese population in New York, with migrants from Fujian and Guangdong provinces making up the majority. Compared to the older generation, young people from Fujian Province are more willing to express their views.

John Sun leaned against a lamp post and quietly watched the parade. When he came to the U.S three years ago, he was in high school. This was the first time he saw a Falun Dafa parade. The many banners and messages in the event attracted him. He said it raised many questions in his mind, such as the source of organs in transplants in China.

He said he had access to free information after coming to the U.S. It was very easy to read about information exposing the crimes of the CCP such as the truth about the June 4 th Tiananmen Square student massacre. He was very astonished to learn the truth, and said he thinks freedom of speech is very important. Differing opinions should not be stifled and the right to judge should be left to the individual. “I listen to this and that, and I judge for myself instead of being indoctrinated with only one voice. Here in the U.S., there are divergent opinions on everything, criticisms and disagreement—all of them contain some truth,” he said.

He pointed out, “On the surface, the Constitution in China appears to be very complete. One can have parades and gatherings but the reality is a different story. If Chinese officials say your gathering is illegal, you’re done for. The word ‘illegal’ is used very widely and ordinary citizens have no rights. The CCP chairman receives 100 percent of the votes. It is so fake.”

Zheng Ligui, another young man from Fujian Province, said that the parade was very grand and the drums were uplifting, “It makes one want to join the parade.” 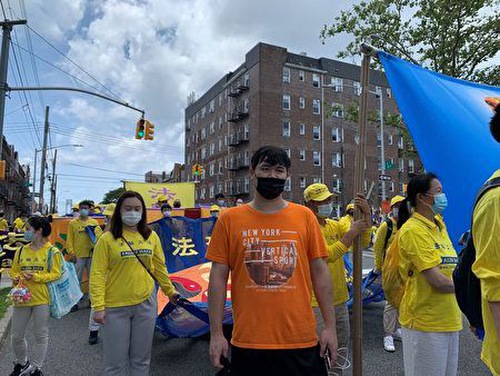 Zheng said that he heard the CCP’s anti-Falun Gong propaganda when he was a primary school student. He saw several videos on the Internet when he was in high school and realized that, “The CCP was intentionally demonizing Falun Gong.” He agreed with the principles of Truthfulness, Compassion, Forbearance taught by Falun Dafa. He said that he began to read the information on Falun Gong six years ago, and said reading it, “Makes me feel at peace.”

Hundreds of Chinese Quit the CCP

During the parade, 417 people decided to quit the CCP and its affiliated organizations. Twenty-eight renounced their membership in the Party, 127 quit the CCP Youth League, 262 quit the CCP Young Pioneers and 255 people signed the petition to end the CCP.

A man told a volunteer for the quit the CCP center that he recently came from China and it was the first time he's seen the parade. He said that the CCP has done very bad things and decided to withdraw from the Young Pioneers.