(Minghui.org) Today's news from China includes incidents of persecution that took place in 23 cities or counties in 11 provinces, where at least 64 practitioners were recently persecuted for their belief. 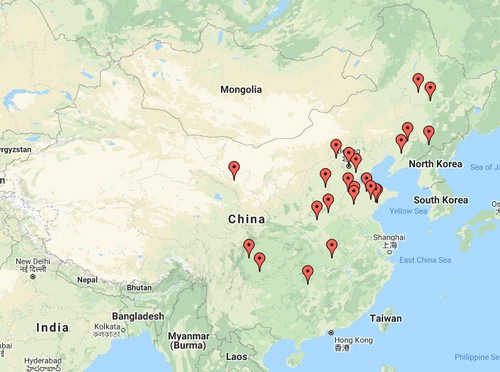 Ms. Xia Shuilian, 75, was arrested in October 2019 for distributing truth-clarifying materials, and has since been detained in the Xinxiang detention center. It was learned that she was recently sentenced to three years in prison and taken to the Zhongmu Women’s Prison.

Mr. Chen Bingqiang was reading articles and writing a solemn statement when officers from the Cangbu Street Police Station came to his home on the morning of May 20, 2021. They arrested him and took him to the police station. Mr. Chen managed to escape later that day.

Ms. Sun Fang from Xihu Village had to leave her home to avoid persecution in late May 2021. Her parents, in their 70s, and her son have been harassed and threatened by village officials.

Mr. Zhao Kai was arrested at home in the Xingfujinyuan Residential Community, Xiangfang District by officers from the Lijiang Police Station in Daoli District on the morning of June 10, 2021. His home was ransacked and some notebooks and Dafa books were confiscated. Mr. Zhao is currently being detained in the Daoli District Detention Center.

Ms. Chang Xinhong is a teacher in the Laiwu Technician College. She received a call from the Huayuan Police Station in Laiwu District again on June 10, 2021. She was told that if she went to the police station and wrote a guarantee statement her name would be removed from the black list. Ms. Change sternly refused.

Gao Heping, an official in Dongnan Village of Wanquan District, and two officers Shi Liang and Luo Yuchun, came to Ms. Yue Yuqi’s home at around 11 a.m. on June 3, 2021. Ms. Yue was not at home. They forcibly entered Ms. Yue’s room, ignoring the objection of Ms. Yue’s daughter-in-law. The officers videotaped the home with their body cameras and confiscated two posters on the wall, a photo of Falun Gong’s founder, several Dafa books, a tablet, and a desktop calendar. They said that Ms. Yue should go to the police station when she returned.

These people then went to Ms. Tian Wenfang’s home. Ms. Tian was home alone. These people confiscated two photos of Falun Gong’s founder, three articles, two copies of the book Zhuan Falun, one hand-copied Zhuan Falun, and a wall poster. Ms. Tian tried to reason with them but was unable to stop them.

Mr. Qin Dexin was harassed at home by Cao Xueqiong, director of the Baojinli Community of Jinchuan District at around 8 p.m., May 19, 2021. They pressured him to sign the three statements, which he refused.

One week later, because he continued being coerced by community staff members and was threatened with being fired from his job, Mr. Qin’s landlord had to ask him to leave. Mr. Qin had no choice but to quit his job and go back to his hometown in the countryside.

Village official Hou Erquan led two officers from the Liangzhuang Town Police Station, including Zhao Hu, to Ms. Li Xiaohuan’s home in the Maoci Village on June 5, 2021. The officers video recorded the scene when they came into Ms. Li’s home.

Two plainclothes officers came to Ms. Wang Lanfang’s home on June 11, 2021. They ransacked the home and confiscated several Dafa books and other personal belongings. Ms. Wang’s son hurried home after receiving Ms. Wang’s call and saw that they attempted to take his mother downstairs. He wanted to know who they were and their names. One young man started yelling and claimed that her son was obstructing their official duty. Another one grabbed her son’s neck, pushed him into a corner and began beating him. Since they were in the corridor, the neighbors in the building all came out to see what was going on. The two officers stopped but claimed that they would call more people to come.

Ms. Yang Huimin from Nancai Village of Wuqing District was sentenced to one year in prison with a two-year probation and fined 5000 yuan by the Wuqing District Court on June 8, 2021.

Ms. Qiu Tieling and Ms. Wang Jinhui were arrested and taken for a physical examination the same day. Their family members were not allowed to see them or to send them any clothing.

Shen Xiaona (gender unknown) was placed under formal arrest by the Lishan District Procuratorate on June 3, 2021.

Mr. Li Jiwei from the Shengli Oilfield and his family members are all Falun Gong practitioners. Mr. Li and his eldest sister were both divorced and stayed with their parent. They have been harassed constantly in various ways by different people since April 25, 2021. His second elder sister Li Jifang was harassed in her workplace. Her husband stood with his wife.

Ms. Wu Xiuqin from Jingyu County was arrested at home by officers from the Jingyu County Domestic Security Division, including Yu Xuejun, on the afternoon of June 8, 2021. Her home was ransacked. She is currently being detained in the Baishan City Detention Center.

Xue was arrested on February 14, 2020 and was placed under eighteen months of residential surveillance.

Ms. Liu Naxin, her younger brother, and her brother’s wife were arrested by officers from the Xibinhe Police Station in Miyun District in early June 2021. Her home was ransacked and some Dafa books were confiscated.

Ms. Huo Zhiying was reported to police for talking about Falun Gong in the subway on April 20, 2021. She was recognized by the surveillance camera and arrested on April 27, 2021. Her home was ransacked. Her Dafa books and photo of Falun Gong’s founder were confiscated. She was detained for five days in a detention house.

Ms. Tu Kuijin, 67, was seen on surveillance cameras in mid-January 2021 when she distributed truth-clarifying materials in the Hankou District. She was followed by Hankou District police. Ms. Tu and her husband (non-practitioner) were arrested at home. Her husband was later released. Ms. Tu is currently detained in the No. 1 Women’s Detention Center of Hubei Province.

Mr. Gao Peng lives in the Qiujiahe Village, Wutu Street Sub-District, Changle County. He was arrested by officers from the Chengguan Police Station on the afternoon of May 18, 2021. His home was ransacked and his personal belongings, including computer, cell phone, and Dafa books were confiscated.

Mr. Gao was taken back home by police at around 9 p.m., May 20, 2021, and was said to be placed under residential surveillance. When he returned home his family members noticed that he was having difficulty walking, and that his arms were swollen. The police came to take him at around 6 or 7 a.m. and took him back at around 9 or 10 p.m. in the following days until May 26. He was taken out on May 26, 2021, but did not return home.

His home was ransacked again by Zhao Shisheng and other officers from the Domestic Security Division on the morning of May 25, 2021.

His family members received a notice form the Changle County Police Department and learned that Mr. Gao was placed under formal arrest. Mr. Gao is currently detained in the Changle Detention Center.

The officers from the Xinshengdian Town Police Station in Xiajin County came to Mr. Huo Shixian’s home on May 31, 2021. They ransacked his home and confiscated three Dafa books, a photo of Falun Gong's founder, 800 yuan in paper bills imprinted with Falun Gong’s facts, and eight USB drives containing truth-clarifying materials. Mr. Huo and his wife were arrested and taken to the police station for interrogation. The couple refused to cooperate with police. They were released at around 8 p.m. that day.