(Minghui.org) Today's news from China includes incidents of persecution that took place in 16 cities or counties in 12 provinces, where at least 41 practitioners were recently persecuted for their belief. 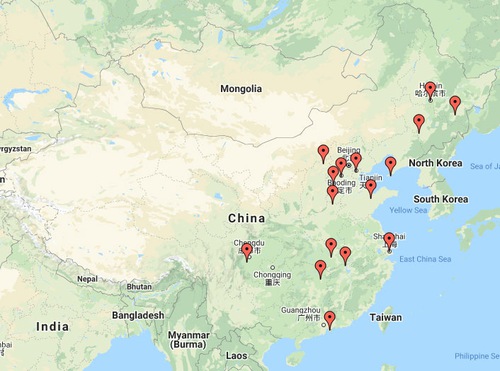 Ms. Li Shuiqing, nearly 80, from the Lianxi District was arrested on July 13, 2020. After she was released on bail, the police continued to harass her. They threatened her and said she had to go to the hospital, otherwise she would be put in prison.

Ms. Sun Fang from Xihu Village, Cangbu Sub-district in the Xinzhou District, was reported to the police on May 12, 2021. She was arrested by officers from the Xinzhou District Domestic Security Division and the Yangluo Police Station. She was taken to the Wuhan Women’s Detention Center and held for five days. She returned home on May 17.

After returning home, personnel from the Cangbu Street Police Station, the Cangbu Street Comprehensive Management Office, and the Xihu Village Committee in the Xinzhou District continued to threaten and pressure her to give up her belief. They tried to take her to a brainwashing center. To avoid further harassment, she left home and her whereabouts are unknown.

Staff members of the Caoshi Street Residential Committee in Zuoyun County, where Ms. Liang Zhuanmei’s household is registered, went to her mother-in-law’s home to harass them twice in mid-April 2021 and asked for the whereabouts of Ms. Liang.

A Yunxing Town Police Station officer called Ms. Liang’s daughter on May 19, 2021, and told her to go home as part of the “zero-out” campaign. If she didn’t, it would adversely impact her right to travel out-of-town.

Ms. Zhao Qiuying was arrested at home on March 29, 2021. Her home was ransacked. She was placed in detention the following day and officially placed under arrest on April 13. She is being held in the Nankai District Detention Center.

Three officers from the Chengguan Police Station in Fuping County went to Ms. Li Wenling’s home on May 13, 2021. Ms. Li was not at home; she was with her husband, who had been hospitalized.

The officers asked her daughter, “Is this Li Wenling’s home?” Her daughter said it was and asked what they wanted. They said they were looking for Ms. Li to sign paperwork. Ms. Li’s daughter told them that her mother was staying with her father in the hospital. The officers said they would look for her at the hospital. When an officer took out his cell phone to videotape Ms. Li’s daughter, she stopped him.

Ms. Yin Shuhua, Ms. Yan Xinpu, and Ms. Song Xiujing from the Mancheng District were intercepted when they went to the Xi’an Village Farmers’ Market in Shunping County to distribute Falun Gong materials on the morning of April 14, 2020. They were later taken to the Anyang Township Government and then to the Anyang Police Station. One of them was forced to sit in an iron chair for refusing to cooperate.

The three women were taken to the Shunping County Police Department at around 5 p.m. Two officers grabbed each practitioner’s hand and took their fingerprints. The practitioners were picked up by their families after 7 that evening.

On the afternoon of May 19, 2021, the Anyang Police Station called the three practitioners separately, telling them that they had to go to the police station at 8 a.m. the next day and spend a few days in administrative detention before the case could be closed.

Ms. Wang Lilin was scheduled to be tried in the Nanshan District County on the afternoon of May 20, 2021. The court assigned Ms. Wang a lawyer, which she declined. She will defend herself.

Ms. Wang Xuezhen, Ms. Liang Xuebin, and another practitioner (name and gender unknown) were photographed and arrested on Meishan Pedestrian Street on May 21, 2021.

Li Mo, deputy Party secretary of the Dongyi Community Management Office, has called and harassed practitioner Ms. Ge Lina many times over the past few months. When Ms. Ge refused to answer the phone, her name was reported to the Political and Legal Affairs Committee of the Longshan District in Liaoyuan City. Li also put pressure on officials where Ms. Ge works and tried to force her to sign the three statements.

Ms. Feng Rongxia is from the Jing’an District. On the morning of May 20, 2021, Wang Jun, a residential police officer, and others hiding outside the door, snatched her house key. Ms. Feng suffered multiple injuries. The officers were from the Sanquan Police Station in Pengpu New Village in the Jing’an District.

The officers opened the door and broke in, snatched towels and toothbrushes, and claimed they needed these items for testing and filing her DNA information. They later went to the home of Ms. Feng’s 80-year-old mother, Ms. Ding Hualan. When they pressured her to hand over her towel and toothbrush, Ms. Ding refused to cooperate.

Ms. Wu was confronted by these people for two to three hours. In the end, the police officers confiscated her Falun Dafa books but did not arrest her.

Ms. Cong Guimin was arrested at home by officers from the Tieshan Sub-district Police Station in the Lushunkou District on May 19, 2021. They threatened her on the grounds that she did not sign paperwork as required by the “zero-out” campaign. Ms. Cong was taken to the Dalian City Detention Center for 10 days of detention.

The police arrested Ms. Chen Xia in Yangshugou Village on May 19. She was taken into custody in Dalian City. It is not known where she is being held.

Officer Yang Xiyu from the Taoyuan Police Station and others went to the home of Ms. Lu Guixia at around 8 p.m. on May 18, 2021. They wanted to take pictures of her, which she refused to allow.

Ms. Zeng, Ms. Tuo (Ms. Niu Xiaona’s mother), Mr. Nian Jingsheng, and Mr. Shi Tiejun, who were arrested at the same time, were also released. The police did not return any of the personal items they confiscated, including ID cards, salary cards, bank cards, cash, cell phones, or computers.

There are no recent updates regarding Ms. Niu Xiaona, Ms. Sun Shuhua, Ms. Shao, or Xiaobo.

Ms. Dong Yongqian from Kaili City, Guizhou Province, was arrested by the Anyang City police in Henan Province on the afternoon of May 7, 2021, for using social media App QQ to send Falun Gong messages to people in chat groups. She was taken to Henan Province that evening. She is being held in the Anyang City Detention Center.

Xinhe Police Station officers went to the home of 68-year-old Ms. Peng Xiaomei and photographed her on May 13, 2021. They pulled out a subpoena and wanted to take her away, but Ms. Peng did not cooperate and tried to call her older brother. The officers snatched her cell phone when she tried to dial.

Ms. Peng used an old smartphone to take pictures of them, until they took that one, too. They called the emergency number 120 and asked emergency personnel to come take her blood pressure, but she refused to cooperate. They then called in Xu Jun, the deputy director of Xinhe Police Station.

Xu ordered the officers to arrest her by force, put her in handcuffs, and carry her into the car. If she did not cooperate, they would trample on her photos of the founder of Falun Gong. To protect the photos, she agreed to go with the officers.

Two officers stayed behind and continued to ransack her home. About 60 Falun Dafa books and about four bags of personal belongings, including printed materials, amulets, and laptops, were confiscated.

Ms. Peng was taken to the Kaifu District Police Department. Li Ji, head of the criminal investigation team, interrogated her. Li asked where she got the materials, where she did her grocery shopping and left Falun Gong information, and who received the materials, among other questions. The officers took her hand and footprints against her will. They also recorded her iris and tested her blood. After that, they held her in the interrogation room.

Around 11 p.m., Ms. Peng was taken to the Changsha City No. 1 Hospital for a physical. She had high blood pressure but declined any treatment. After staying in the hospital observation room overnight, she was taken to the city detention center for criminal detention at about 11 a.m. on May 14. The detention center refused to admit her since she had failed the physical exam. She was taken back to the police station at 4 p.m. The officers later released her and placed her under residential surveillance.

Ms. Sun Shuyun from Xujiamiao Village in the Wutu Sub-district, Changle County, was arrested at home by plainclothes officers from the Wutu Police Station on the afternoon of May 18, 2021. They ransacked her home and confiscated dozens of Falun Dafa books, one set of Master’s lectures, memory cards, and about 2,700 yuan in paper bills with Falun Gong facts printed on them.

The officers put her in the underground interrogation room of the police station for about 24 hours. The next day, they told her daughter to take her home.

Two officers broke into elderly Mr. Li Fangqing’s home in the Hanting District on the morning of May 21, 2021. They took three weekly publications, a list with names of people who had signed to quit the CCP, keepsakes, and copies of Master's lectures.

Ms. Wang Ye from Mudanjiang City returned home after being detained for 15 days on April 19, 2021. Her husband Mr. Hou Xicai was placed under criminal detention.

Ms. Zhu Yanhua was arrested by Hualin Police Station officers on August 14, 2020. The detention center refused to admit her. Director Zhang Hua of the police station refused to release her. She was released on bail after being held for three days. The officers told her that she would be tried.

Ms. Zhu was arrested again by the officers on May 19. She was taken to the detention center but released due to high blood pressure. The officers threatened her that they would go to her home again in a few days.