(Minghui.org) Today's news from China includes incidents of persecution that took place in 20 cities or counties in 10 provinces, where at least 36 practitioners were recently persecuted for their belief. 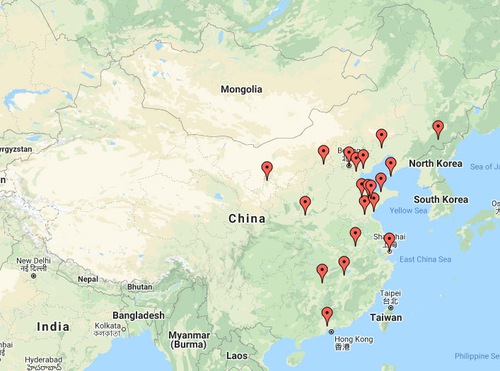 Ms. Lu’s husband, who is 88, was so frightened by the police breaking in that he became severely ill and had to be taken to the emergency room on May 11. He was just discharged on May 25.

Ms. Gao Lingling was harassed at home on May 12, 2021. Several people from the Gaoxing Town Comprehensive Management Office and the Donggou Neighborhood Committee showed up and told her to sign a statement promising not get together with other Falun Gong practitioners and not to contact other practitioners. Ms. Gao refused to sign it, but they wouldn’t leave. They pressured Ms. Gao’s daughter to put lipstick on Ms. Gao’s thumb and press it on the paper.

Ms. Gao was arrested on May 10, 2021, when she visited another practitioner but was released the same day.

Ms. Guo Xiulan was put on trial for the second time.

Ms. Wang Zhiping was to be held in the Fusong County Detention Center for seven days.

Ms. Fan Baoqin from the Hedong District was summoned to the Lushandao Police Station by two officers on the morning of May 31, 2021, to sign the three statements. Three days have passed and she has yet to return home.

Mr. Li Xuejun from Lingwu City and Mr. Zhang Xingzeng, in his 60s, from Yinchuan City were recently sentenced to prison for distributing truth-clarifying materials. They were taken to the prison admission center.

Mr. Wang Dunlong, his wife Ms. Hu Xueye, and his sister-in-law Ms. Hu Wenye were arrested at home by officers from the Longgang Police Station and the Yaohai District Domestic Security Division on July 21, 2020. His home was ransacked and the police confiscated his computer, printer, Dafa books, truth-clarifying materials, and other personal belongings.

Ms. Hu Xueye was detained for 13 days. Ms. Hu Wenye was released on bail pending trial. Mr. Wang Dunlong was officially arrested the last day he was in custody.

Ms. Yang Mingling left her hometown in Jiangjiaguanzhuang Village, Zhuge Town, and worked in Qingdao City. She was arrested by officers in Qingdao City and the Zhuge Town Police Station on May 31, 2021, and escorted back to Yishui County. Her home in Qingdao City was ransacked. Personal belongings, including her Dafa books, a photo of Falun Gong's founder, and 3000 yuan in cash with information about Falun Gong printed on the bills, were confiscated. Ms. Yang was abused during the arrest. Her face was bruised and her arms swelled up.

Liang Geyuan (gender unknown) was reported to the police, arrested, and taken to the Ganghang Police Station on June 1, 2021. Liang was released later that day.

Zhao Peng (gender unknown) was arrested and taken to the Ganghang Police Station on June 1, 2021. It is possible that Zhao has been taken to a detention center.

It is learned recently that a male practitioner in his 50s, who was arrested in March or April 2021, is currently detained in the Wulian Detention Center.

Mr. Niu Fentian and his wife were called to the village office in Tugutui Village, Heiwang Town in the Zichuan District, in April 2021. They were pressured to give up Falun Gong, which they refused to do.

Ms. Sun Youqin was recently arrested at her son’s home by three officers from the Kuiju Police Station. Her arrest was ordered by Liu Chang’en, head of the Changyi City Domestic Security Division. Ms. Sun was placed under official arrest and is being held in the Changyi Detention Center.

Ms. Sun was arrested in February 2020 for talking to people about Falun Gong. She was released on bail pending trial.

Four officers went to Ms. Yu Shufen’s home on May 25, 2021, and took her to the police department to interrogate her. Ms. Yu refused to cooperate. She was then given a physical exam. Since the results would not be available until the next day, she was allowed to go home but told to return the next day. Ms. Yu left home the next morning to avoid further persecution.

Ms. Mou Jingqin, in her 50s, was reported for talking to people about Falun Gong and was arrested on the morning of May 26, 2021. Her home was ransacked. Several Dafa books and her daughter’s computer (her daughter is not a practitioner) were confiscated. Ms. Mou was released that afternoon.

Several officers from the Pingcheng District went to Ms. Zhang Yanrong’s home around 9 a.m. on June 1, 2021. They ransacked it and confiscated Dafa books and a photo of Falun Gong's founder. Ms. Zhang was taken to the Xinjiannanlu Police Station for interrogation until about 11 p.m. that night. She was then admitted to the Xihanling Detention House. Her family member went to the detention house the next day but was not allowed to visit her.

Ms. Zhang Suzhen’s husband was harassed at work for the second time on the morning of June 2, 2021. Jing Xuefang from the Yanhu District Police Department and two people from the Political and Legal Affairs Committee told him to take his wife to a brainwashing center. They said that he could accompany her to the “study” session and still get paid.

Ms. Li Yanxia from Tangxia Town was arrested at home by 12 officers at noon on February 8, 2021. She was interrogated for seven days straight.

Ms. Liang Meihua, Ms. Xiong Quanmei, and Ms. Xie Chunmei were tried in the Xihu District Court on the morning of June 2, 2021.

Ms. Liang Meihua, 72, was imprisoned for almost 13 years. Ms. Xiong Quanmei, 69, has been arrested five times, spent three years in a forced labor camp, was sentenced to three years in prison, and had her pension suspended. Ms. Xie Chunmei, 57, has been arrested multiple times, subjected to forced labor three times, and expelled from public office.

Liu Dehui (gender unknown) was called home by village officials on May 24, 2021, when Liu was working in the fields. Liu was told to sign a paper while someone tried to record the process. Liu refused to cooperate.

Mr. Zhao Kuixiang was harassed at home many times by Zhu Jianying, deputy of the Qianxi County Domestic Security Division, and other officers from February to April 2021.

Several practitioners in Xinji Town, Qianxi County were harassed in late May 2021.

Ms. Li Ruiqi in Diaoshuiyuan Village, Xinji Town, was harassed twice. The first time, the officers walked right into her home because the door was unlocked. The second time, four officers waited outside her locked door for an hour or two, calling Ms. Li’s son and her daughter-in-law until they entered the home.

Ms. Liu Chunqin was arrested by officers from the Taishan Road Police Station in the Tianyuan District on the afternoon of May 27, 2020. She was later sentenced to four years in prison. Her family members have not been allowed to visit her.

Several police officers went to the home of Mr. Li Wanjiang and his wife Ms. Wang Guixiang around 7 p.m. on June 2, 2021. They ransacked the home and confiscated their Dafa books, a photo of Falun Gong's founder, and other personal belongings. The couple and their son (a non-practitioner) were arrested. Further details are unknown.

Several officers from the Nanta District Police Department went to Mr. Jia Chunfeng’s home around 5 p.m. on March 22, 2021. They ransacked it and confiscated many personal belongings. Mr. Jia, his wife, and their child were arrested. His wife and child were later released. Mr. Jia has been held in the Chaoyang City Detention Center ever since.