Israel: Protests Against the CCP’s Crimes

(Minghui.org) A group of Israeli citizens held a series of protests between March and May to raise awareness of the Chinese Communist Party’s (CCP) human rights violations and its infiltration of other countries with its totalitarian ideology. The protests began in Tel Aviv and later took place in Jerusalem in April and in Haifa and Netanya in May.

The first protest took place at the entrance of the Carmel Market in Tel Aviv, the most central market in the city. As Israel was just emerging from its COVID-19 lockdown and it was the Purim holiday, the streets were filled with people celebrating in costumes.

Some passersby stopped by the protest area, listened to speeches, and took leaflets. Many stopped at the petition desk to give their signature in support of ending the CCP. Some signed it right away, as if waiting for the opportunity to express their disdain of the CCP’s crimes, while others were glad for the opportunity since they were already aware of the CCP’s human rights abuses. 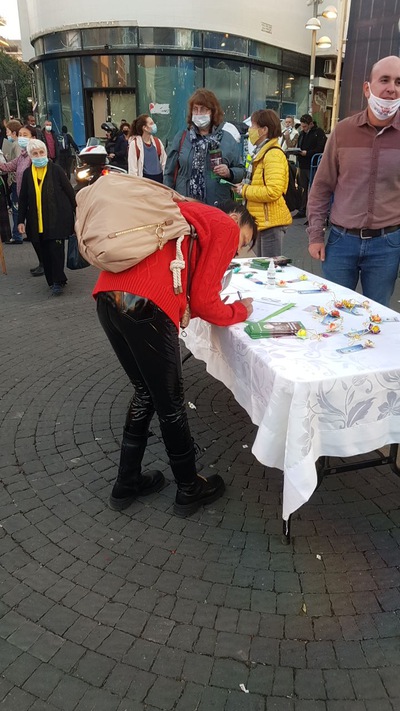 The protest organizers held large signs highlighting the CCP’s violent history, including the Tiananmen Square Massacre, the Cultural Revolution, forced abortions under its “one child policy,” and its torture and killing of Falun Gong practitioners for their faith.

Speaker: Jews Have Responsibility to End Persecution of Universal Values

“The CCP has been persecuting Falun Gong for over 21 years, utilizing the most horrific and severe forms of torture, to such an extent that a very large number of Falun Gong practitioners have lost their lives,” one speaker said.

Another speaker explained, “The reason the CCP persecutes Falun Gong practitioners is because they believe in Truthfulness, Compassion, and Tolerance–these principles are not accepted by the CCP.”

He continued, “This persecution is not only against Falun Gong practitioners–it is a persecution against the universal principles of Truthfulness, Compassion, and Tolerance. As Jews after the Holocaust, we carry a historic responsibility, and we must not remain silent. I call upon everyone here to do their best to end the persecution and to put an end to the crimes committed by the CCP.”

One speaker remarked, “The Covid-19 virus, which the Chinese regime took such great efforts to conceal, has destroyed economies, caused numerous businesses to go bankrupt, and rendered millions sick or dead around the world.

“The criminal cover-up of the Covid-19 virus is just the last link in an endless chain of crimes committed by the CCP. Why is the world, and our country, in such a terrible state now? It is because the Chinese regime knew the virus was contagious but deliberately chose to conceal it from the world for a prolonged period of time–that is the main reason.”

A third speaker warned, “Israel is blindly marching into the Chinese trap. Haifa port, Ashdod port, transportation infrastructure, Israeli knowledge, everything is for sale for a handful of yuan.

“The Chinese communist regime has military treaties with Iran, while we give it free access to our ports, and allow it to dig light rail tunnels here in Tel Aviv, under HaKirya area–the major Israel Defense Forces (IDF) base.

“But if, heaven forbid, a war was to break out between Israel and Iran, which side would China choose? I think the answer is clear to everyone.”

Another speaker said, “The urgency is great, the danger is imminent, and we should wake up fast! I beg you to open your hearts, make the right choice. Because sometimes, looking the other way and saying ‘this has nothing to do with me’ also supports this evil, which is already at our doorsteps.”

“The communist regime is a vicious and cruel regime. Wherever it ruled it wreaked destruction, leaving people oppressed, not daring to be themselves anymore. And it is already here, in Israel. It penetrated our universities, our hospitals, important key organizations, the foreign ministry, municipalities, and our culture.

“The Chinese communist regime does that by means of ‘cooperation’–it gives money, and we do what it asks us to do. The Chinese embassy in Israel exerts much force to do what it wants. It tames us, the Israelis, to become obedient and do what it wants,” he said.

Two youngsters who listened to the speeches for a long time signed the petition and even encouraged other passersby sign it. One of the organizers said, “A young lad and girl, around 18 years old, passed by and joined us. Each stood with ring binder and a blank petition sheet. They wore the ‘End CCP’ leaflet on their necks. Each almost filled a full page with passersby’s signatures (each page can include up to 15 signatures).

“At the end they helped us dismantle the signs and even asked if we need more help. They asked us to give them End CCP leaflets so they could take them home and continue to distribute them.”

One of the organizers said, “Next to me was a 22-year-old man who saw us and decided to offer his help and support throughout the protest. He said he wanted to start practicing Falun Dafa.”

Rabbi Condemns CCP and Its Accomplices 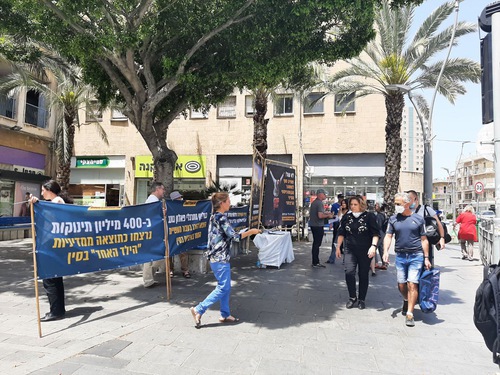 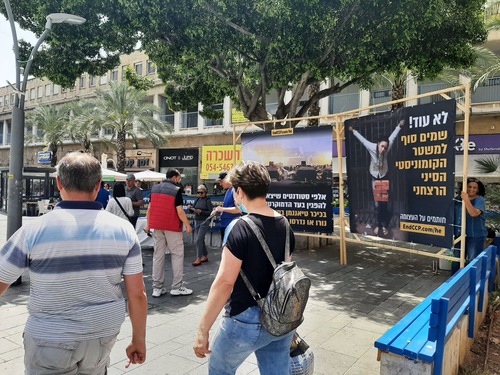 Protests against the CCP in Haifa

Ahead of the protest in Jerusalem, Rabbi Shlomo Aviner, head of Yeshivat Ateret Yerushalayim in Jerusalem, published a detailed op-ed, which also appeared on Facebook, titled “China – the Kingdom of Evil.”

“The wickedness of the Chinese government exceeds all boundaries,” Rabbi Aviner wrote. “With God’s help, dozens of countries have awoken and started to take action. But there are also dozens of countries that justify them. Apparently, they are captivated by economic interests, since China is an economic power, and people mistakenly think that money can solve everything, or because they themselves are criminal states, and as the saying goes, birds of a feather flock together.

“Of course, the Chinese deny all allegations against them, censoring any internal information. But it is still difficult to conceal 1 or 2 million people kept in concentration camps, some of whom were photographed by drones (UAV). Also, a top-secret Chinese document, 400 pages long, was discovered by a foreign investigator. To this we must add hundreds of thousands of people who have disappeared over the years. And of course, forced organ harvesting from people while they are still alive.

“In fact, it is not a party, it is not a government, it is a terrorist organization, which has ruled China cruelly for over 70 years,” he wrote.

Public Support for the Petition

The protesters have also gathered on the promenade that connects Tel Aviv and Jaffa, along the Mediterranean coast. On Saturdays, hundreds of people walk through, including families and couples of all ages. The organizers place big signs that read “END CCP.”

“People are very responsive,” one of the organizers said. “Many people are eager to sign the petition and help. But there are also people who refuse to sign it, or they are reluctant to sign it because they work for a Chinese company, or because they don’t believe it can make a difference. Some signed under a pseudonym. We try to treat everyone kindly.”

In total, about 11,500 Israelis have signed the End CCP petition during these protests.