(Minghui.org) Today's news from China includes incidents of persecution that took place in 21 cities or counties in 9 provinces, where at least 46 practitioners were recently persecuted for their belief. 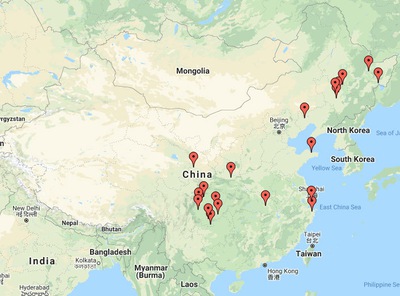 Ms. Yu Shaoping, 61, from Dayi County was a teacher at the Beijie Elementary School. Her salary was suspended. The police arrested her on May 14, 2019. She was tried by the Dayi County Court on September 11, 2020, and was sentenced to four years and six months in prison and fined 5,000 yuan.

Ms. Xun Xiuling, about 65, was arrested by the Baqiao District police in the first half of 2019. She has since lost contact with her family and friends. It was reported that she was sentenced to three years in prison and being held in the Shaanxi Province Women’s Prison.

Ms. Jiang Shuhua was arrested the first time by officers from the Shengyang Police Station on May 26, 2020. Cui Zhanbao, director of the police station, extorted 20 boxes of cantaloupe from her, worth more than 2,000 yuan.

Ms. Jiang was arrested again at the Daqingzui Farmers Market on June 5. After being given a nucleic acid test in Dehui City, she was taken to the Changchun No. 4 Detention Center. On June 19, the procuratorate notified her that they had her case. On August 29, she was transferred to the Dehui Detention Center and has since been held there.

Ms. Jiang was tried by the Dehui City Court on April 4, 2021. It was reported that she was sentenced to three years and six months in prison.

Mr. Sun Zhentie was arrested at home by plainclothes officers from the Dongzhan Police Station, Erdao District, at 6:30 a.m. on April 14, 2021. The officers gathered Dafa books and took photos and videos of him with the Dafa books before arresting him. The officers did not ransack his home.

Members of the Dongrong Community Management Office in Balipu Sub-district went to Ms. Li Zhiling’s home in Helan Xiaozhen Residential Community and harassed her on April 14, 2021. Before that, when no one was at home, these people went ahead and dismantled her satellite dish for receiving NTDTV programming.

Ms. Yang Shufang and Ms. Tao from the Laiyang Agricultural College were reported to the police when they talked to people about Falun Gong at a train station on the morning of April 13, 2021. They were arrested by officers from the Railway Station Police Station. The officers ransacked both practitioners’ homes. They confiscated from Ms. Yang’s home a computer, a printer, printer paper, and paper bills with Falun Gong facts printed on them. The officers also took Ms. Tao’s computer from her home.

Ms. Yang’s family received a call on April 15 and were told that she was taken to the Muping District Detention Center.

Both Mr. He Zhiqiang, 75, and his wife refused to give up their belief during the “zero-out” campaign and were arrested by officers from the Zhoutou Street Police Station, Hanyang District, in early April 2021. No further information is available at this time.

Ms. Tong Li’s case was turned over to the procuratorate.

Officer Li Chenfang from the Beidaying Police Station in Mudanjiang Agricultural Reclamation Branch called Mr. Chen Guoqing around 8 a.m. on April 15, 2021, and told him to go to the police station. Mr. Chen was then taken to the case handling section in the No. 4 Police Station for questioning. Mr. Chen returned home around 10:30 a.m. that day.

Officer Li Gang from the Mishan City Domestic Security Division and others ransacked Mr. Chen’s home on March 31, and confiscated three Falun Dafa books, two book covers, and one seal. The officers also asked him and his wife if they still practiced Falun Gong.

Mr. He Xiaobo went to Hangzhou City on a business trip and was locked up at the Railway Police Station at the Ningbo Railway Station around 11 a.m. on April 14, 2021. The police forcibly took his fingerprints. He was transferred to the Jiubao Railway Detention Center 24 hours later.

Mr. He’s wife was also held in the police station from 2 to 11 p.m. Her fingerprints were also forcibly taken. The couple was arrested after the police found in Mr. He’s wife’s wallet paper bills with Falun Gong facts printed on them. The officers ransacked their home that afternoon and confiscated a set of Master Li’s lectures, two copies of Zhuan Falun, photos of the founder of Falun Gong, and an audio player.

Ms. Li Hualan, 78, is from the Sanchaihe area, Taiping Town.

From January 13 to 16, 2021, village officials and officers from the town police station and the city’s Domestic Security Division went to Ms. Li’s home, four days in a row, and harassed her as part of the “zero-out” campaign. They confiscated Falun Dafa books and photos of the founder of Falun Gong.

On April 8, Zhou Heng and others in the village went to her home again and pressured her to sign statements to renounce Falun Gong. Ms. Li refused. They then ransacked her home but did not find anything they wanted. They threatened, “Your house is in danger and you cannot live in it. Someday we will bring an excavator and tear it down.”

Ms. Zhu Shuling and her son Mr. Zhang Jian were arrested at home by officers from the Dongsheng Road Police Station, Erdao District, at around 8 a.m. on April 15, 2021. The officers ransacked their home and confiscated Falun Dafa books. Further details are not available.

Two officers from the Longfeng Town Police Station and Cai Tingting from the Mamuhe Village Committee went to Ms. Lei Zhoulan’s home at around 10 a.m. on April 14, 2021. Ms. Lei was not at home.

They then went to Ms. Zhang Cuixian’s home in the village and harassed her. They confiscated a copy of Zhuan Falun, several copies of Essentials for Further Advancement, and photos of the founder of Falun Gong.

Then, they pounded on the door of Ms. Zeng Fanfeng’s home and tore off the couplets on her door.

It was reported that Ms. Dai Zhiying was arrested by officers from the Xincun Road Police Station, the Putuo District Police Department, and the Shanghai Police Department on the morning of April 12, 2021. Ms. Dai was previously sentenced to eight years in prison.

Her 80-year-old practitioner mother is missing.

When Liu Zhongrong (gender unknown) took a taxi and told the driver about Falun Gong on July 8, 2020, the driver took Liu directly to the Jianshe Street Police Station. Liu was held in custody for two days before being released on bail. Around mid-August, Liu was detained for two weeks and was taken to the Ren’ai Hospital before returning home. Liu was later arrested again and taken to the Changchun City No. 4 Detention Center. It was reported that Liu was tried by the Dehui City Court on April 4, 2021.

In addition, staff members of the local community management office went to Ms. Sun Liqing’s home and harassed her family. They tried to take pictures and enlist them to pressure Ms. Sun to sign paperwork for transformation. Her family refused to cooperate.

Mr. Wang Xiaosong from Dayi County was placed under residential surveillance. No one was allowed to visit him. The school guard said that no one could get in to visit him without an authorization letter from the police station. Packages left by visitors were not passed on to Mr. Wang either.

Two men and a woman from the Dongrong Community Management Office, Erdao District, knocked on the door at Ms. Wang Liyan’s home at around 7:30 p.m. on April 14, 2021. They claimed to be from the Community Stability Maintenance Office and said they were visiting residents door to door.

Someone who claimed to be a member of the community management office, called Ms. Wang’s parents twice to harass them in the autumn and winter of 2020.

Ms. Liu Derui, about 80, was arrested while distributing Falun Gong materials in the downtown area on April 11, 2021.

Chen Xu and Chen Ermei from the Chengbei Community Management Office in Gulin Town knocked on the door of elderly Ms. Han Biqin’s home. About ten minutes later they both entered her home. Three officers from the Chengguan Police Station in police uniforms arrived. They went straight to the bedroom, ransacked the place, and confiscated photos of the founder of Falun Gong, dozens of Falun Dafa books, Minghui Weekly, several copies of Zhengjian Weekly, and a laptop. They then drafted up a list of confiscated items and asked Ms. Han to sign before leaving.

Officers asked Mr. Wang Zhongge to go to the Shuanglong Police Station on the afternoon of April 16, 2021. They took him back home, ransacked the place, and confiscated Falun Dafa books.

Since May 2020, Ms. Tao Fang, 63, has been harassed and intimidated by a group of people from the Linxia City Domestic Security Division, the Hongyuan Police Station, and the sub-district administration office many times. Each time 12 or 13 people came to her home.

Ms. Chen Xiuying, 86, from Simeng Township has been harassed many times, which placed a lot of pressure on her children and relatives.

In May 2020, the Yongshou Township 610 Office and police station forced Ms. Yang Yufang to go to the township office and sit there for an hour or two every day after work to write a guarantee statement renouncing Falun Gong. This greatly upset her husband.

Zeng Xiangguo from the Taiping Town Government and police officer Zhao Wei went to Ms. Liu Daiqiong’s home in Zouma Village on March 27, 2021. They took a bunch of flowers from her home, and said, “If you do not transform we will keep coming back.”

Zeng and Zhao went to Mr. Hu Biao’s home on the morning of April 1. Zhao said, “This year is the Chinese Communist Party’s centennial celebration, there is no way that you can’t transform.” Zeng added, “Your U disk data has been handed over to the Domestic Security Division for review. If you don’t transform, we will keep coming back until you get transformed.”

Zeng and Zhao then went upstairs immediately to search the place. They found two photos of the founder of Falun Gong, two posts of “Falun Dafa is good, Truthfulness-Compassion-Forbearance is Good,” one incense burner, several boxes of incense, and several DVDs of Fa Lectures. Before leaving, they tore off the couplet posted on the inner door.

People from the Yongtai Community Management Office in Xiangyang District called and harassed Ms. Zhang Xiuhua’s husband and told him to persuade Ms. Zhang to admit that she stopped practicing Falun Gong.

Several people, including Han Yurong, Party secretary of the Xinmin Village in Xinxing Town, Shuangcheng District, went to Ms. Zhu Xiumin’s home and harassed her at the end of March 2021. They asked her if she was still practicing Falun Gong. They wanted to video record her, but she refused.

On April 7, 2021, a community household registration officer in Putuo District went to elderly Ms. Wu Yuqin’s home. They told her to cooperate with them and go to the police station. At the time, Ms. Wu noticed that there were two officers walking down the stairs from the third floor. Later, she learned that they were officers from the 610 Office who came with the local officer and hid upstairs. A male officer who had a law enforcement audio and video recorder on him, said, “All those who were released from prison have to take a blood test!” Ms. Wu and her husband adamantly refused.

About 20 officers from the Chaoyang County Domestic Security Division and the Qidaoling Town Police Station, broke into the homes of Ms. Xia Fengyu, Mr. Xia Fengquan, and Mr. Dong Jiuxue in Haojiawopu Village and arrested them at around 6 a.m. on April 11, 2021.

Mr. Dong was released for health reasons. Ms. Xia and Mr. Xia were taken into custody.