(Minghui.org) May 13, 2021, is the 22nd World Falun Dafa Day and the 29th anniversary of Falun Dafa’s public introduction. Governor John Carney and Lieutenant Governor Bethany Hall-Long issued a proclamation declaring May 13, 2021, “Falun Dafa Day in the State of Delaware” and urged all citizens to recognize those who practice Falun Dafa and understand its important health benefits. 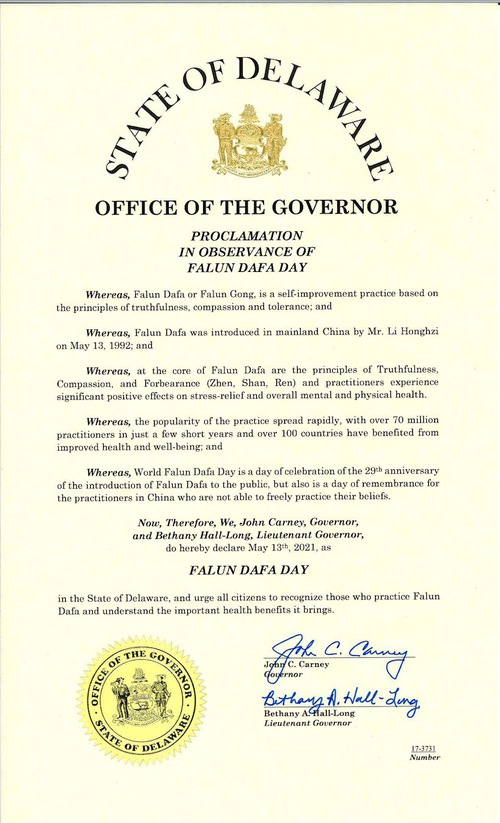 The proclamation reads, “Whereas, as the core of Falun Dafa are the principles of Truthfulness, Compassion, and Forbearance (Zhen, Shan, Ren) and practitioners experience significant positive effects on stress-relief and overall mental and physical health.

“Whereas, the popularity of the practice spread rapidly, with over 70 million practitioners in just a few short years and over 100 countries have benefited from improved health and well-being; and

“Whereas, World Falun Dafa Day is a day of celebration of the 29th anniversary of the introduction of Falun Dafa to the public, but also is a day of remembrance for the practitioners in China who are not able to freely practice their beliefs.”

Falun Dafa (also known as Falun Gong) was introduced to the public in 1992. Nearly 100 million people across China were soon practicing it after experiencing improvements in their health and character. Jiang Zemin, former head of the Chinese Communist Party (CCP), perceived the spiritual discipline's growing popularity as a threat to the Party's atheistic ideology and on July 20, 1999, issued an order to ban the practice.