(Minghui.org) Today's news from China includes incidents of persecution that took place in 9 cities or counties in 7 provinces, where at least 22 practitioners were recently persecuted for their belief. 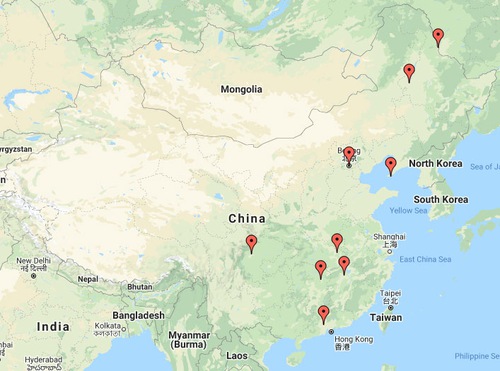 Ms. Che Guohong, 53, from Xunke County, was followed by a car from the Xunke County Domestic Security Division, then arrested on April 8, 2019, for distributing Falun Gong materials. Her home was ransacked. She was released on bail the following day.

Ms. Che was summoned on November 4, 2019 and detained after being taken to the Heihe City Detention Center.

She refused to give up her belief, refused to write the three statements, and said that it was not illegal to practice Falun Gong. She was tried and sentenced to two years in prison by the Xunke County Court on March 22, 2021. In order to keep her in prison longer, her detention time was altered in the verdict, which resulted in her detention duration exceeding the maximum number of days prescribed by law.

Mr. Zeng Xingyang was arrested by police officers from the Tianhe District at a store around the morning of April 9, 2021. A large group of police officers and plainclothes went to his home in the Liwan District at 1 p.m. that afternoon and ransacked the place. They confiscated a cell phone, a computer, Falun Dafa books, and photos of the founder of Falun Gong. At around 4:30 p.m., the officers arrested his wife Ms. Deng Fang and his sister Ms. Zeng Yueling.

Ms. Zhou Yanbo from Jinzhou District was arrested by Domestic Security officers in November 2020. She was tried via video link in March 2021 and sentenced to four years in prison. She is still being held in the Yaojia Detention Center.

Officer Liu Xin from the Jiaoqiao Police Station led two people from the police station and two people from the Qiluowa Community to Ms. Jiang Xiaohong’s home in April 2021. They asked whether she still practiced Falun Gong. As soon as they entered her home, they looked all around and started taking photos.

One day in February or March, Tan from the community management office called and harassed Ms. Jiang and asked where she was located. When she refused to answer, they threatened her mother and pressured her to give them her address.

Two male police officers in uniform and two women with notebooks and pens came to harass Ms. Jiang again on April 10, but she was not at home.

A residential police officer, a law enforcement officer, and village security officials Wang Yaopeng and Yu Youkun, in Sanshilipu Town, Jinpu New District, went to the homes of Falun Gong practitioners in Dafangshen Town to harass and threaten them starting at 9 a.m. on April 8, 2021.

Ms. He Xianggu, 60, former nurse at the Hunan Maternity and Child Health Hospital, has been repeatedly detained, taken to forced labor camps, poisoned with psychiatric drugs in mental hospitals, and expelled from jobs for practicing Falun Gong.

Ms. He was arrested at around 3 p.m. on March 15, 2021 by several officers from the Sifangping Police Station and joint security staffers while talking to people about Falun Gong and distributing Falun Gong materials in Sifangping Plaza.

At the police station, two Domestic Security officers tried to extract information from her and kept her in handcuffs. That night around midnight, three police officers escorted her to her rented house and ransacked the place. The head of the Domestic Security Division broke the metal cabinet containing Falun Dafa books and confiscated all of them.

The next day, the police forcibly collected blood from her, and took her palm prints and footprints. Ms. He was taken to the Changsha City Detention Center at 8 p.m. that evening for ten days of detention.

After staying on a hunger strike for five days in the detention center, Ms. He suffered from breathing difficulties, pale complexion, weak limbs, and physical exhaustion. A female guard in the detention center poured water into her mouth, while a male guard squeezed her jaw and broke one of her teeth. Her mouth immediately filled with blood. Her lips became swollen and also bled.

To avoid being held responsible, the police took her to the Mawangdui Nursing Home at around 3 p.m. on March 20. Doctors had to take blood from her femoral artery, as no blood could be drawn from any of her other blood vessels. They also did an electrocardiogram and a cardiac ultrasound. She was taken home around 8 p.m. that night.

After Mr. Yang Licheng was arrested by officers from the Zhanqian Police Station, Tiefeng District, his mentally retarded daughter was taken to a mental hospital.

Ms. Wu Lizhen was arrested on the same day she was released from an earlier arrest.

Three village officials from Xinping Town, along with two police officers from the Xinping Police Station, went to Ms. Liu Shengju’s home at 10 a.m. on April 6, 2021, and harassed her. They confiscated a small radio and two calendars. They took photos and tore off a pair of couplets posted on the door and a New Year’s blessing picture with Falun Gong content that was on the wall.

Wang Hanqiao (gender unknown) took the D3008 train at 2 p.m. from Macheng City North Station to Shanghai on April 8, 2021. Wang was reported to the police for talking to people about Falun Gong on the way, and was arrested. Wang is being held in the Shanghai Police Department.

It was reported that Wang’s home in Hangzhou City, Zhejiang Province, was ransacked.

Ms. Qu Shumei is being held in the Yaojia Detention Center.