(Minghui.org) Today's news from China includes incidents of persecution that took place in 12 cities or counties in 7 provinces, where at least 51 practitioners were recently persecuted for their belief. 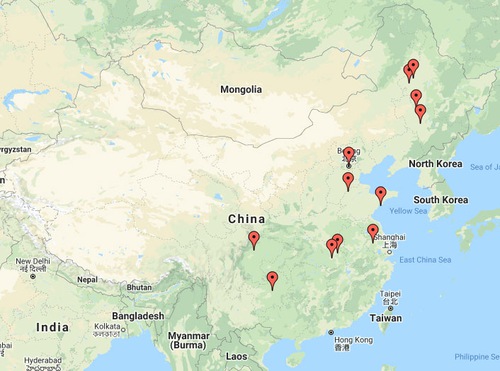 Tang (given name and gender unknown), over 70 years old, went to the Xizhan Farmers Market to buy groceries around 9 a.m. on March 23, 2021, and met Ms. Liu Deqin and Ni Hong (gender unknown) there.

Officers from the Qihe County Domestic Security Division broke into Yang Feng’s home on the morning on April 7, 2021. They confiscated two laptops and books. Yang (gender unknown) was arrested. Yang’s elderly and frail mother is now home alone, with no one to help her.

At 7 p.m. on April 8, 2021, Huang Xia (gender unknown) from Jiaoshi New Village, Chengguan Town, was arrested at home by a group of people who did not identify themselves. Huang’s whereabouts are still unknown.

From March to early April of 2021, the Political and Legal Affairs Committee of Qianguo County, together with several communities in Baiyilaga Township, Qianguo County, resorted to intimidation, coercion, hoax, and deception, and arrested Falun Gong practitioners in villages and farms under its jurisdiction. They leveraged family affection, social security minimum wages, expulsion from work, children’s academic prospects, and children’s jobs to harass and persecute practitioners.

It was reported that people from a community management office in Baiyilaga Township and Party secretary Li Zhenping of Baiyilaga Village constantly harassed Mr. Cong Douwen and his wife Ms. Pan Guihua. They also called the couple’s son and told him to photograph his parents and forward the photos to Li.

Party secretary Gao Ming, of the No. 11 Branch of Hongguang Farm, led Li Shuai and a woman from the Hongguang Community Management Office to Mr. Qu Jun’s home, in the branch, on the afternoon of March 30, 2021. They went to Mr. Qu’s home claiming to process the minimum allowance for his practitioner mother Ms. Wang Yulan. Li pressured Mr. Qu to let them videotape him and record his voice with a cell phone.

On April 9, 2021, Li Shuai and the woman went to Mr. Qu’s home again along with with staff members from the Qianguo County Political and Legal Affairs Committee. Mr. Qu was not at home. The staff member pressured Mr. Qu’s mother to sign some paperwork, and videotaped her signing it. Ms. Wang told them that she was illiterate. They said that fingerprints were fine. They also threatened her that if she did not give her fingerprints, she would not be granted her minimum allowance.

Cui Hua (gender unknown) and Ms. Li Guizhi were arrested by officers from the Longsha Domestic Security Division while talking to people about Falun Gong and distributing cards with the QR code for unrestricted Internet access on March 24, 2021. The officers ransacked their homes and confiscated their computers, cell phones, Falun Dafa books, photos of the founder of Falun Gong, and paper currency bills with Falun Gong facts printed on them. Both practitioners have since returned home.

On April 8, two officers from the Fangzhuang Police Station took Ms. Hu and her son to the procuratorate.

Ms. Hu refused to acknowledge their charges and refused to sign any paperwork. The prosecutor handling the case yelled and threatened to arrest her, sentence her to prison, and withhold her pension if she did not show up as summoned two more times on Friday and the following Monday.

More than twelve officers from the Xingouqiao Police Station, Qingshan District, broke into Ms. Sha Zhaodi’s home around 8 a.m. on March 30, 2021. They arrested her and covered her head with a black hood. The officers ransacked her home and confiscated Falun Dafa books, printed materials, and other personal belongings.

Li Zhuquan (gender unknown) is being held in the Changchun City No. 1 Detention Center.

Ms. Zhao Laowu, in her 60s, and her family were recently harassed by officers from the Fulu Town Police Station.

Ms. Zhang Shuqing, in her 50s, was recently harassed by Hongchen Community personnel. They asked her whether she was still practiced Falun Gong.

Ms. Ma Qin, who was awarded the title “outstanding teacher” in Pingdu City, was arrested in her residential community around 7 p.m. on March 28, 2021. She was taken to the Taishan Road Police Station that evening. The police began ransacking her home at 8 o’clock that night, and continued until around 3 a.m. on March 29. After ransacking her home, the officers took her husband to the police station, where they questioned him and took notes. He had to sign the search warrant. He was released that afternoon.

On the morning of March 29, officers forced Ms. Ma’s son and his fiancee to go to the police station to be questioned while the police recorded them. The officers asked whether they practiced Falun Gong and where her son’s fiancee lived.

Around 9 a.m. on March 30, Ms. Ma’s husband was called to the police station again. The officers again asked him whether his prospective daughter-in-law’s family practiced Falun Gong. Her husband was not allowed to go home until after 4 p.m. In addition, Ms. Ma’s elderly parents-in-law were also questioned with notes taken.

It was reported that the officers had monitored Ms. Ma for a long time before arresting her. After she was arrested, the officers followed her husband and monitored his phone calls.

Ms. Ma is still being held in the police station. Her lawyer has started working on her case.

Wang Hanqiao (gender unknown) took Rail Line D3008 at 2 p.m. from the Macheng City North Station to the Hangzhou Station on April 8, 2021. Wang’s family went to pick Wang up at the station but did not see Wang. After inquiries, there was no record that Wang exited Hangzhou Station. Wang is now missing.