(Minghui.org) Falun Dafa practitioners across the world held marches, peaceful rallies, and candlelight vigils to commemorate the 22nd anniversary of the April 25 appeal. They demonstrated the grace of Falun Dafa and exposed the Chinese Communist Party’s (CCP) decades-long brutal persecution. At rallies in New York, San Francisco, Sydney, and the UK, practitioners also protested the CCP’s re-abduction and detention of practitioner Mr. Sun Changjun in Jilin. 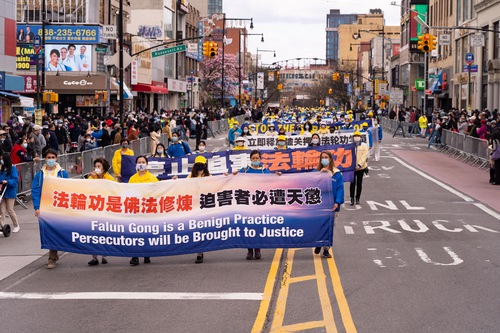 On April 18, 2021 over 1,000 practitioners peacefully marched and rallied in Flushing, New York to commemorate the April 25th appeal and protest the CCP’s persecution.

In 2002, Mr. Sun Changjun, 26, was sentenced to 17 years in prison for helping intercept the cable TV signal in Changchun and broadcasting information about Falun Dafa. [Editor’s note: This heroic act was carried out in order to counter the Communist regime’s pervasive slander of Falun Dafa.] Mr. Sun was severely tortured in Jilin Prison and was not released until 2019.

Just one year after he was released from prison, on April 6, 2021, Mr. Sun was abducted by the 610 Office and the Domestic Security Division of Wangqing County, Yanbian City, and detained in the Yanji Brainwashing Center. Before they abducted him, the 610 Office called Mr. Sun and threatened to "transform" him – a term for forcing him to give up his belief.

Last year the CCP launched a new phase of the persecution: the so-called “Zero out” campaign. The goal of the campaign is to force all known Falun Dafa practitioners to give up their belief. The CCP abducts and persecutes those practitioners who refuse to renounce Dafa.

Brainwashing centers, part of the Communist Party’s network of “black jails,” have appeared in large numbers across China. People are arrested and detained in black jails without going through any legal procedures. The black jails, or brainwashing centers, are governed by the 610 Office, which illegally detains practitioners at will and indefinitely. In order to “break” practitioners, the Party subjects them to systematic torture, brainwashing, forced injestion of psychiatric drugs, and other inhuman persecution methods.

Sun Changjun Risked His Life to Tell People about Dafa

At 7:30 p.m. on March 5, 2002, in Changchun, 18 Falun Dafa practitioners successfully intercepted the cable TV network in the city. For 50 minutes, they broadcast the programs, “Falun Dafa Spreads to the World” and “Is It Self-immolation or a Scam?”

The broadcast was seen by 300,000 subscribed families and millions of viewers on 32 channels. Changchun residents learned the truth about the persecution of Falun Dafa for the first time. They also learned that Dafa is practiced in many countries across the world. The programs also exposed how the CCP staged the Tiananmen Square self-immolation to slander Falun Dafa.

The Changchun interception and broadcast incident took many people by surprise. The broadcast was the result of huge contributions from a group of courageous practitioners directly involved, and other Changchun Falun Dafa practitioners.

During the year-long raid that began on the night of the interception, more than 5,000 practitioners in Changchun were arrested. At least eight people were tortured to death. Mr. Hou Mingkai, 35, was arrested and was beaten to death on a tiger bench by the police within two days.

Mr. Jin Xuezhe, the only practitioner who participated in the TV interception and escaped China, was saddened after learning that Mr. Sun Changjun was detained again. Mr. Jin said that the Changchun TV interception let people know how the CCP spreads lies to deceive people.

He said, “The CCP’s lies incite hatred toward practitioners and Falun Dafa, which teaches Truthfulness-Compassion-Forbearance. [Practitioners'] broadcast interception was like lightning in the dark night, piercing the iron curtain of the CCP’s lies. It is a milestone in breaking the CCP’s information censorship and encourages people across the world to bravely expose the CCP’s lies.”

During the march and rally held in Flushing on April 18 to mark the April 25 peaceful appeal, Mr. Chen Jingyu from Changchun called on the international community to help rescue Mr. Sun. 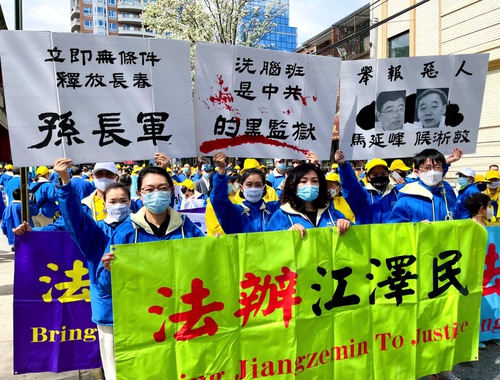 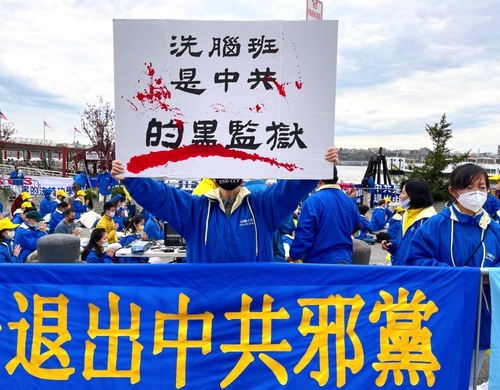 Practitioners displayed signs worded “Release Sun Changjun Immediately and Unconditionally” during the march and rally in New York on April 18.

According to Mr. Chen, after graduating from college, Mr. Sun worked as the mayor’s assistant in the Luozigou Town Government of Wangqing County, Jilin Province. At the beginning of 2000, he was abducted on his way to Beijing to appeal for Falun Dafa.

The county’s CCP deputy secretary told him he had to write a repentance statement before he could resume his job. Mr. Sun refused to write such a statement and lost his job.

After the Changchun TV interception, Mr. Sun was arrested and tied to a tiger bench for two days. During his illegal show trial he defended Dafa, and was scorched with a high-voltage electric baton.

On the night Mr. Sun was taken to Jilin Prison, he was beaten and a rib was fractured. He was constantly tortured while imprisoned and contracted tuberculosis. His condition deteriorated and he became emaciated. Because he persevered in his belief, Jilin Prison refused to release him on bail.

Protest in Front of Chinese Consulate in San Francisco

Practitioners in the San Francisco Bay Area held a candlelight vigil on the evening of April 23 in front of the Chinese Consulate to protest the CCP’s persecution.

Annie from Changchun said, “I stand here to protest. The Changchun Political and Legal Affairs Committee illegally held a brainwashing session in Jingyue District to persecute Falun Dafa practitioners in Changchun. The brainwashing center is a CCP black jail. Recently, many practitioners have been illegally arrested.” 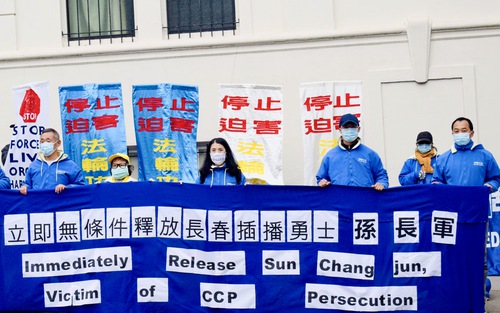 Practitioners hold a rally in front of the Chinese Consulate in San Francisco on April 23 and call on the international community to help rescue Mr. Sun. 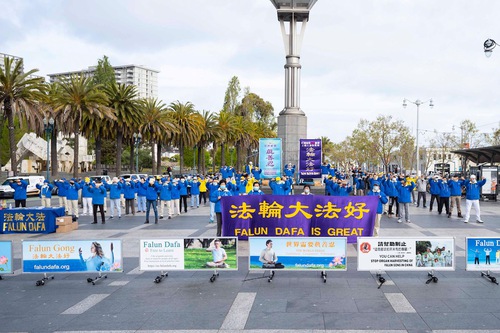 Practitioners hold group practice and a rally to mark the April 25th appeal and protest the CCP’s persecution.

Daniel pointed out that last year the CCP implemented a nationwide campaign to force practitioners to give up their belief. He said, “This directly led to large scale arrests and detentions of practitioners. This is why the brainwashing centers that persecute practitioners have once again appeared in China. In these black jails, there is no limit on the detention period, and no rule of law.”

Practitioners held rallies in front of the Sydney Town Hall and across from the Chinese Consulate on April 23 and 25, respectively. Former Associate Professor Li Yuanhua of Beijing Normal University held up a display board worded “Release Sun Changjun immediately.” 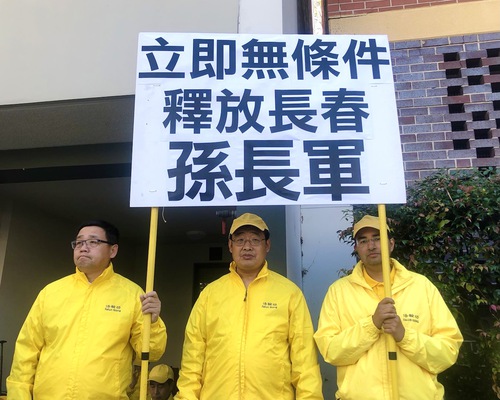 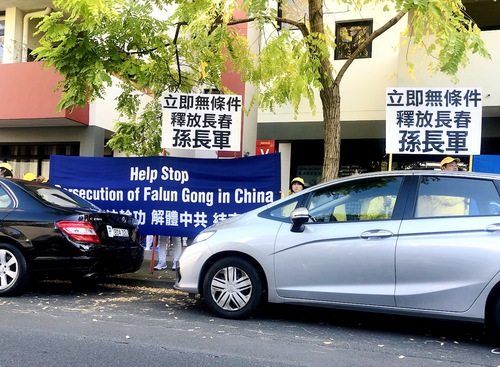 Rally near the Chinese Consulate in Sydney on April 25.

Mr. Li said that he was once detained by the CCP in a brainwashing center because he did not give up Falun Dafa. “The brainwashing center is a place where the CCP exerts mental control and persecution. Brainwashing forcibly instills the Party’s slander of Dafa and restricts personal freedom. Various intimidation methods are used to force practitioners to give up their belief. Otherwise, one would face unlimited detention.”

Mr. Li called on the governments of all countries to stand on the side of justice and conscience, help practitioners stop the human rights disaster in China, and rescue Mr. Sun and other detained practitioners.

During an event on April 24 in downtown Birmingham, practitioners held display boards asking that Sun Changjun be immediately released. 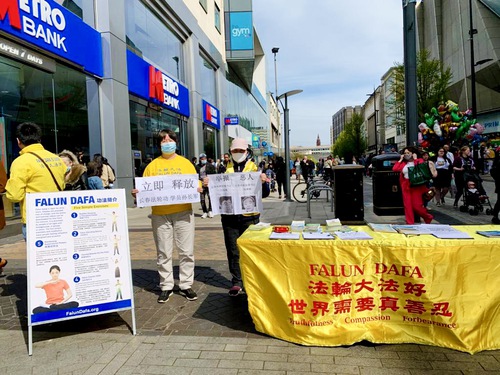