Once Tortured in Prison for 17 Years and Losing 45 Lbs in 2 Months, Human Rights Hero Arrested Again

(Minghui.org) Seven people, including a neighbor of Mr. Sun Changjun's, broke into his home and took him away on April 6, 2021. Mr. Sun called his family in the evening and told them he had been brought to a hotel. His family didn’t hear back from him after that. They recently found out that he has been taken to Yanji Brainwashing Center.

The people who broke into Mr. Sun’s residence in Yanbian prefecture, Jilin Province, were agents from Wangqing County 610 Office and domestic security officers in Yanbian. Before the arrest, agents from the 610 Office called him and warned that they had a special plan to make him renounce his faith in Falun Gong, a spiritual discipline that has been persecuted by the Chinese Communist Party since 1999.

The latest persecution of Mr. Sun is part of the “Zero-out” harassment campaign that was launched last year, in which the authorities came after every practitioner on the government’s blacklist and tried to force them to sign statements to renounce their faith. Brainwashing centers have since been set up in many provinces to persecute Falun Gong practitioners.

In Jilin Province alone, where Falun Gong was first introduced to the public in 1992, brainwashing sessions were held in Changchun City, Jilin City, Siping City, Baishan City, Songyuan City, Tonghua City, Liaoyuan City, and Yanbian City. At least 337 practitioners have been targeted across the province, with the 185 (54.9%) practitioners in Yanbian being the highest among all cities. Some brainwashing classes were held in hotels and others in commercial office buildings.

Mr. Sun was born in Wangqing County in Yanbian and grew up in a simple, honest, and loving family. He left home to go to college and realized how complicated modern society had become. He felt lost and began to wonder if he needed to stay kind and courteous anymore. After reading Zhuan Falun, the main book of Falun Gong, he identified with the universal values Falun Gong teaches, which are Truthfulness, Compassion, Forbearance. He knew that, as long as he gave his best in everything he does, he would be rewarded accordingly.

Mr. Sun became a public servant after college and worked as an assistant for the head of Luozigou Town in Wangqing County. He often helped clean his mother’s feet and cut her toenails. His mother once suggested that he should stop doing that because she did not want people who work with him to see it and make fun of him. He comforted his mother and said, “You are my mother and it’s only natural for me to take good care of you. Who’s going to laugh at me?”

After the persecution of Falun Gong started in July 1999, Mr. Sun went to Beijing to speak up for Falun Gong. On his way there, his supervisor caught him and put him in a detention center for a month. A secretary of the county commission told him that he would be allowed to go back to work only if he signed a letter of repentance and renounce his faith. He refused and lost his job.

The CCP ordered all of its mouthpieces, including television stations, newspapers, and radios, to run misinformation around the clock to slander Falun Gong and incite public hatred against Falun Gong practitioners. On March 5, 2002, Mr. Sun and several other practitioners intercepted television signals in Changchun City, the capital of Jilin, and broadcast videos in 8 cable channels to expose the regime’s lies.

The program started at 7:19 p.m. and lasted about 50 minutes. In the video it demonstrated the benefits of the practice and explained how the January 23, 2001 self-immolation incident was staged by the CCP to frame Falun Gong practitioners.

The authorities went on a frenzied mass arrest the night of the broadcast. Approximately 5,000 practitioners in Changchun City alone were arrested and seven died during the arrest. Mr. Sun, then 26, was arrested at the end of August 2002. He was sentenced to 17 years in Jilin Prison. Another practitioner, Mr. Hou Mingkai, who was 35, was beaten to death two days after his arrest in August 2002.

Arrested and Tortured to Near Death for 17 Years

Right after Mr. Sun was arrested, he was put on a Tiger Bench and tortured for two days. At his hearing in September 2002, a guard shocked him with an electric baton while he argued that practicing Falun Gong was constitutional. His skin was severely burnt.

The judge sentenced Mr. Sun to 17 years, Mr. Liu Chengjun and Mr. Liang Zhenxing 19 years each, Ms. Zhou Runjun and Mr. Liu Weiming 20 years each. Many others were put in forced labor camps. 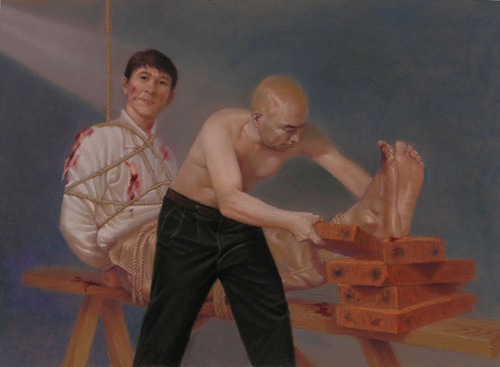 Torture illustration: Tiger Bench. The guards tie the victim's legs tightly to the tiger bench using belts. They put bricks or other hard objects under the victim's feet and keep adding layers of bricks until the belts break. Victims endure unbearable pain and often pass out during these torture sessions.

The authorities put Mr. Sun in Jilin Prison on October 25, 2002, and broke one of his ribs during a beating session the same night. His weight dropped 20 kg (45 lbs) in 70 days after relentless torture. By 2005, he suffered pulmonary tuberculosis with cavities in both lungs and coughed out a lot of blood.

His health took a deep dive from 2007 to 2009. He had tuberculosis infections not only in the lungs, but also in the chest and abdominal walls. As a result, liquid accumulated in his chest and abdominal cavities. He was severely underweight with a disproportionally large belly. The prison authorities still refused to release him for medical treatment because he refused to sign statements renouncing Falun Gong.

Despite the suffering illnesses and inhumane tortures in prison, Mr. Sun remained kind to other prisoners. A paralyzed prisoner’s brain was infected with parasites. Unable to clean himself for a long time, he had a repugnant smell. While many inmates stayed far away from him, Mr. Sun offered to help trim his ingrown fingernails and toenails. He put the prisoner’s hands and feet in warm water and gently trimmed his nails.

Separated by the glass partitions, his mother held the phone with trembling hand, said to him with tears in her eyes, “My son, when are you coming back home? I’m afraid your dad and I may not be able to live until the day you come home.”

Less than 1.5 years after Mr. Sun was released, he is now arrested again for his faith.

Helping to Rescue Mr. Sun Changjun from Prison by Looking at Things with Righteous Thoughts