(Minghui.org) I have practiced Falun Dafa for 23 years. My older sister and her daughter are Dafa practitioners too. My niece’s son developed a stubborn skin disease when he was only a few days old. His mom and grandma kept playing Master’s audio lectures to him and the disease was gone when he turned one.

In honor of the 22nd World Falun Dafa Day on May 13, 2021, I’d like to share my grandnephew’s story to express our deep gratitude to Master.

Within a few days after my niece gave birth to her son, some red bumps began to appear on the boy’s body. My niece and her husband did not pay close attention in the beginning. Later, the condition became more and more serious, and the child was so tormented by the intense itch on his skin that he rarely slept and cried day and night.

As time went on, bumps grew all over his body, on the head, face, hands, feet, stomach, back, and even on his genitals. Anyone who looked at it would have been scared. The bumps oozed out fluid and wherever it flew, new bumps would grow. The broken skin would form thick scabs. The scabs fell off layer by layer. After the thick scabs dried up, it would crack and ooze out blood.

In late March 2020, when the baby was seven months old, both my niece and her husband quit their jobs and moved back in with my sister so more people were available to take care of the child, who needed around-the-clock care. The adults listened to the child's heartbreaking cries every day.

Later, my sister and my niece and her husband also developed one or two bumps on their arms, but they did not spread. These few bumps made them feel firsthand the unspeakable pain that the baby was enduring.

My sister described that it was intensely itchy as well as painful, as if a needle was piercing deeply into the flesh. People with medical knowledge said that such skin disease not only made sufferers itchy on the skin but also caused nerve pain. The painful and itchy sensation is unbearable.

Because the bumps were itchy and painful, the child slept restlessly, crying and fussing. In order to prevent him from scratching and breaking his skin, his parents clutched his hands tightly, day and night. The poor child, as if tortured, could do nothing but cry.

The child was tormented by this strange skin disease since birth, and his parents also suffered with him. They both felt worn out due to lack of sleep.

When we saw the baby after my niece moved back to our hometown, we were shocked, having never seen such a serious condition before. We could not tell what the baby looked like – he was as if disfigured, with his face covered with scabs. Our hearts were all broken looking at the poor infant and his helpless eyes, listening to his heartbreaking cries and watching him struggle.

When the child was nine months old, his condition got worse. The adults had to carry him day and night. The baby must always remain on his back while sleeping, and the adults, while lying on each side of the baby, would hold on to his hands hard for fear that he would scratch his skin. Sometimes when the adults were not careful and let go of his hands, he would scratch his head or face to the point of bleeding. He would be covered by blood and yellow fluid all over his face.

When breastfeeding, the child must also lie on his back. There must be two people on each side to hold his hands hard to prevent him from scratching. Adults also needed to make sure not to let his head touch anything. Otherwise, the baby would push his head hard on the object and have a seizure-like convulsion. It was terrible.

He did not hit any of his milestones: he could not sit, crawl, or eat solid food. Any introduction of food caused an allergic reaction. He had to totally rely on breastfeeding.

Over time, his condition did not improve but got much worse. He cried day and night. The adults all reached their limits as well. Even the neighbor downstairs came to complain to them that they were disturbed by the noise. They said the parents should not let the baby cry so much and affect others' rest. Everyone was overwhelmed with pressure.

In May 2020, my niece spent 3,000 yuan on some medicine from a very famous Chinese medicine doctor. The prescription included a powdered medicine with an oil-like liquid, adding up to a total of three bottles. After applying this medicine, the child developed upper respiratory symptoms and they had to stop using it.

They also got another herbal soup with sugar for the baby to drink. After two days, he began to have diarrhea. They stopped the medicine, but the diarrhea lasted for a long time. The baby also had some other complications.

Various Treatments from Different Doctors to No Avail

The boy's paternal grandparents took him to a hospital. The doctor stated he was allergic to breast milk and suggested baby formula. The boy refused the formula and the adults force-fed him. He began to vomit and have diarrhea. He even refused to breastfeed for two days. Everyone was in a panic. Finally, after another two days, he resumed breastfeeding.

His father went to other doctors and brought back various medicines, which all made his symptoms a lot worse after being ingested or applied to his skin. His parents went to various hospitals and doctors with hope, only to end up in despair each time.

My niece and my sister both felt exhausted, but thanks to Falun Dafa, they never gave up hope.

My sister stated that her daughter would have fallen apart a long time ago and her family might have been broken as well without Dafa.

My niece began practicing Falun Dafa at eight. She firmly believed that Master has been protecting her and her child.

When no more hospitals were willing to treat the baby, her husband no longer objected to her playing Master’s audio lectures to their child.

She played the lectures day and night and also recited Master’s poems. Whenever the baby cried, as long as the lecture was playing, he would calm down.

Her husband did not practice Falun Dafa. When the baby was fussing, he also started to recite the poem while pacing back and forth.

The baby got better day by day. When he was 11 months old, he was able to eat and sleep on a regular basis. Before his first birthday, he was completely well! His skin was as healthy as any normal baby without any scar! Now we could see his true self. His development also caught up with a normal baby. 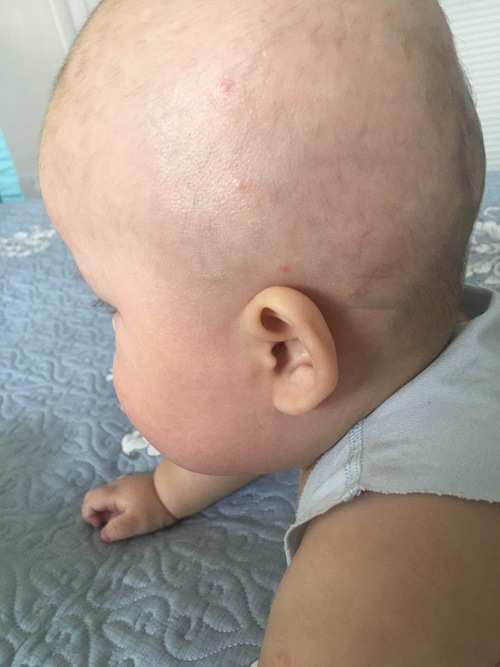 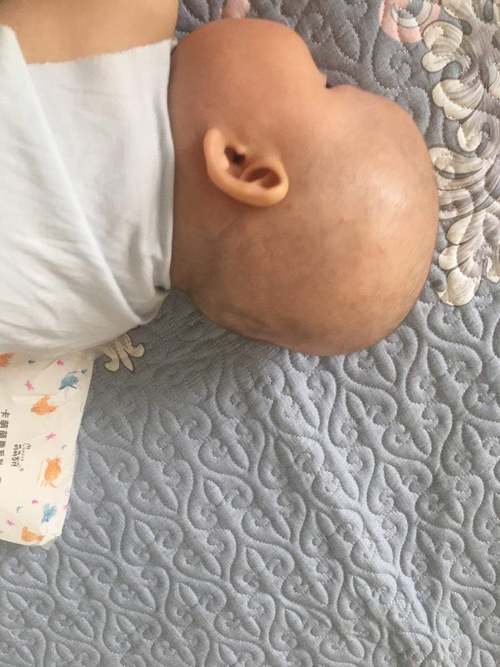 It truly was a miracle! After being tormented for so long and exhausting every medical treatment, he was cured by only listening to Dafa lectures! Our entire family is deeply grateful for Master's saving grace!

We submitted the before and after photos of the baby to the Minghui website, hoping for more people to see this miracle.