(Minghui.org) During World War II, field hospitals in the U.S. military were filled with wounded soldiers. Due to the hot weather, mosquito bites, and lack of medicine, surgical infection rate and mortality rate were very high, and the morale of the wounded was also low.

One day, a doctor played some much-loved music for the wounded soldiers. Surprisingly, after listening to the music, both the infection and mortality rates dropped significantly, and the healing time required after each surgical operation also shortened. The American people have since recognized the healing effects of music.

Music has always played an important role in traditional Chinese culture since ancient times. Zhu Zhenheng, a famous doctor in the Yuan Dynasty (1279–1368), once pointed out, “Music is also medicine.” In fact, the Chinese characters for music, medicine, and treatment share the same origin, and they look very similar in ancient oracle bone script. 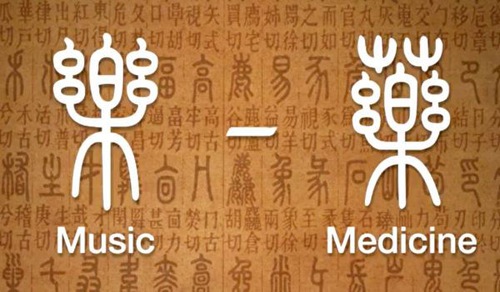 It was recorded in Lüshi Chunqiu·Guyuepian (Master Lü's Spring and Autumn Annals · On Ancient Music) that in the early days of the Taotang tribal period, it was often cloudy and the air was stagnant and damp, waterways were congested and unable to flow as they used to. People were depressed and sluggish, and their muscles and bones shrank. So they were encouraged to dance to strengthen their body. The Yellow Emperor also ordered Ling Lun and Rong Jiang to cast twelve bells to harmonize the five tones to play beautiful ancient music. People in ancient times were said to use dance and music to cure diseases that shrank their muscles and bones due to depression and stagnation.

The book Shuo Yuan recorded stories of Miaofu from a primitive tribe treating patients with bamboo wind instruments 5,000 years ago.

Bai Juyi, a well-known poet of the Tang Dynasty, also wrote such lines in one of his poems: “With music coming into my ears, all things that bother my heart disappear.”

The guqin has traditionally been favored by scholars and literati as a musical instrument of great subtlety and refinement. “When a gentleman plays guqin, it is not just for its entertaining sound, as it also helps those who are successful in their career observe state affairs, and the less successful ones be content with their destiny.” Guqin is not about entertaining others but “entertaining oneself” for the cultivation of virtues.

Ancient Chinese held the view that a sickness ought to be treated at its origin. “Origin” refers to Yin and Yang, which are regarded as the natural law of the universe, the origin of all, and the fundamental driving force for the cyclic growth and death of all things in Mother Nature.

It was written in Lüshi Chunqiu·Dayue: The origin of music lies in the distant past. It is generated in duliang (appropriateness), rooted in Tai Yi (the origin of all things), which derived Liangyi (two opposing forces) that gave rise to Yin and Yang......In general, music presents the harmony of heaven and earth, the blending of Yin and Yang.

Music, deemed to be originated from Tai Yi and transformed from Yin and Yang, corresponds to the five elements in heaven, the five seasons on earth, and the five internal organs of man. Music uses external regular sound modulations to reconcile the harmony of Yin and Yang of the human body so as to achieve the balance of Yin and Yang and to conform to the natural state of harmony between man and nature.

According to Huangdi Neijing·Suwen (The Yellow Emperor’s Classic of Medicine· Suwen): Heaven has five tones, which correspond to the five internal organs of man: spleen – gōng, lung – shāng, liver – jué, heart – zhǐ, kidney- yǔ. Based on the understanding of such relationships, people in ancient times used music to influence and regulate the vitality of the five internal organs.

The music piece “Yangchun Baixue” (Spring Snow) for guqin by Shi Kuang (a renowned master of music) during the Spring and Autumn Period is said to be a piece played by fairies upon the order of the the Emperor of Heaven. After Shi Kuang heard the music, he simulated it and wrote it down.

According to the “Magic Secret Notation” of guqin scores, “Yangchun” (sunny spring) is a melody based on the gōng tone, while “Baixue” (white snow) is a shāng-tone melody. The gōng-tone melodies are generally graceful and profound, while the shāng-tone melodies present strength within gentleness, bringing out a lyrical, mournful sentiment, and at the same time demonstrating a righteous and resolute temperament. “Yangchun” symbolizes that all things appreciate the arrival of spring, sunny with a gentle breeze, and the selfless grace of Heaven to all things and beings; while “Baixue” (white snow)” refers to the noble, awe-inspiring spirit of snow and bamboo, implying the great virtues of the Earth. Since only people with the same level of virtues are capable of playing such music, very few are able to join in chorus.

It is said in Yue Ji that music is joy, and qin and se (musical instruments) please the mind; music indicates impressions produced by external things and is evaluated for the cultivation of virtues; music is used to nurture the mind, and the essence of life is thus held in harmonious balance.

Therefore, the ancient sage kings created etiquette and music not to satisfy selfish desires for sensual pleasure but to clear away the evilness in people’s minds, expel their filthy thoughts, and to bring out the good nature they were born with so that they would not go astray due to secular desires and would be able to return to the righteous path laid out for humanity. New material conditions would always give rise to new desires, and yet external objects can never truly enrich one’s mind.

However, Shi Kuang held down the strings to stop Shi Juan and said, “This is the sound of a doomed state, and you must not play it. This is the piece Shi Yan created for the reckless King Zhou (the dissolute last ruler of Shang). After King Wu defeated King Zhou, Shi Yan fled to the east. He threw himself into the Pu River and drowned. Any state that hears this music would have its strength weakened.”

Duke Ping of Jin did not believe him and insisted on listening to the melody. He also ordered Shi Kuang to play the piece in an even sadder tone. Shi Kuang tried to talk him out of listening to sad music, but to no avail.

As soon as Shi Kuang began to play the piece, a flock of black cranes gathered in the courtyard. When he continued to play, the black cranes stretched their necks and yelled out loudly as they spread their wings and danced.

Duke Ping was overjoyed and wanted to have the piece played in an even more mournful melody, so he ordered Shi Kuang to play it again. Shi Kuang tried again to stop the Duke from listening to such music. But the Duke thought he was already an old man and it wouldn’t matter whatever music he listened to. Shi Kuang had no choice but to play it again. As he was playing, white clouds surged from the northwestern horizon, strong wind started blowing, and rain began to pour. Tiles flew from roofs and people ran for their lives. Duke Ping was terrified and lay on his stomach in the middle of the porch. After that, a severe drought occurred in Jin, and nothing grew for three years.

Good and elegant music has a positive impact on people and society. In a narrow sense, such music can cultivate people's sentiments and character, encourage noble aspirations and morality, and prolong life; from a broader perspective, it can help the governance of a country and educate the populace, so as to ensure peace for the people and prosperity of the country.

In contrast, low and highly sensuous music can mess up people’s minds with distorted emotions, encouraging lust and sexual indulgence, which would damage one's body and cause harm to the country. For example, modern rock music produces raucous and chaotic sounds. While listening to such music, people are likely to indulge in emotions and desires and lose control of their minds. It is not surprising that quite a number of rock musicians indulge in drugs, incest, and tend to die young.

It is said that in ancient times, after Confucius listened to “Shao” music in Qi state, he was so captivated by it that he could not tell the taste of meat for three months. Elegant and righteous music was believed to be able to rectify one’s mind, helping people let go of secular desires and cultivate their virtues. This is also true in today’s world.

There have been numerous true stories about how babies who were born with hearing loss restored their ability to hear after listening to Falun Dafa music. We present a few of them below.

A Falun Dafa practitioner’s grandson was born in April 2018. When the baby was born, he had a small cleft in his upper palate and his tongue was shorter than normal, which made it difficult for him to suck milk. His neck was also short, and the front of his neck was almost covered up by his double chin. More seriously, the baby could not hear. Doctors suggested an operation to fix his hearing and said that he would also need more operations for other issues. The whole family became deeply worried.

The Dafa practitioner and her daughter (also a practitioner) played Dafa music “Pudu” and “Jishi” to the baby boy with an MP3 player every day and sincerely recited “Falun Dafa is good” and “Truthfulness-Compassion-Forbearance is good” with the baby in their arms.

Two months later, the baby was awakened by thunder and he burst out crying. He was taken to hospital for a checkup when he was four months old, and tests showed that his hearing was normal and there was no need for the operation suggested earlier. When he was ten months old, the baby underwent a small procedure to have the cleft on his mouth fixed.

He is nearly two years old now. The toddler can speak simple words and eat and drink by himself. He is truly a happy, joyful little boy.

A middle school student in Beijing recalled, “I was born prematurely with underdeveloped organs. The hospital persuaded my parents to give up on me, and they agreed. But my grandma practiced Falun Dafa and she refused to accept the hospital’s advice... In the end, blessed by the boundless grace of Falun Dafa’s Master, and from listening to the beautiful Dafa music “Pudu” and “Jishi,” not only did I come back from the brink of death, but I have also grown into a healthy and handsome young boy.”

Falun Dafa is a high-virtue cultivation practice of the Buddha school, guiding practitioners to cultivate their minds and character by the highest universal characteristics of Truthfulness-Compassion-Forbearance. Through self-cultivation, practitioners become more tolerant of others when conflicts arise learn to be considerate of others in their conduct. Supplemented by five sets of gentle exercises, practitioners have their mind and body constantly purified as they progress in cultivation and gradually become one with the characteristics of the universe.

Music created by Dafa practitioners who have elevated through cultivation contains powerful and compassionate positive energy, which can clear out bad substances. Facts have proven that people who listen to this kind of music will benefit both physically and mentally. The phrases “Falun Dafa is good” and “Truthfulness-Compassion-Forbearance is good” connect directly with the positive energy of the universe and can help people drive away evil, escape pestilence, avoid disasters, and turn things around in the most difficult situations.