(Minghui.org) Today's news from China includes incidents of persecution that took place in 17 cities or counties in 9 provinces, where at least 28 practitioners were recently persecuted for their belief. 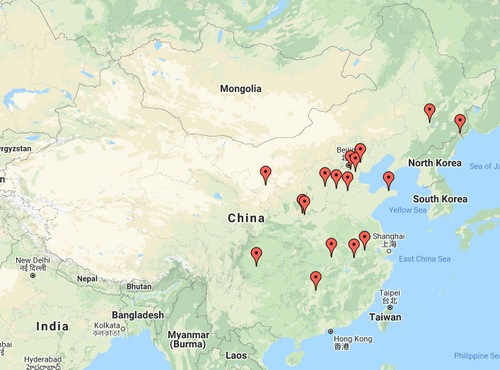 Mr. Qi Yanming, 58, was arrested in mid-May 2020. He was released on bail because of the pandemic. He was held in the Jilin City Detention Center after a court hearing in August 2020. He was sentenced to a year in Gongzhuling Prison.

Wang Xiuzhen (gender unknown) is being held in a brainwashing center.

Mr. Wang Binde was harassed at home by three plainclothes officers from the Nanshan Police Station on April 12, 2021. The officers started to photograph everything as soon as they entered his home. He stopped them. One officer handed him a paper and demanded he sign it. The officer said it was ordered by his supervisor. Mr. Wang refused and said, “My wife is sick. You will be responsible if you frighten her. Leave your names here.” The officers then left in a hurry.

Ms. Su Deqin was harassed at home by five or six officers from the Huanqu Police Station around noon on April 13, 2021. They ordered her to sign a “guarantee statement” renouncing Falun Gong. She refused. They demanded her husband sign it. She tried to stop him, but he signed it. Her photo was on the paper.

On the afternoon of April 16, 2021, Ms. Zhang Xingxi's son came home from work. As soon as he opened the door, a person dashed down the stairs and shoved him aside. Twelve people followed, rushed into the place, and arrested Ms. Zhang. One of them punched her son in the head and hit him when he fell to the ground. His eyeglasses were broken. Ms. Zhang is being held in a brainwashing center.

Ms. Zhang’s husband, Mr. Rui Xiaolin, was imprisoned and made to do forced labor for practicing Falun Gong. He was persecuted to death in the Nanhu Forced Labor Camp in Anhui Province in 2002. Ms. Zhang and her son were repeatedly harassed by police and community clerks during the CCP’s current campaign to “zero out” Falun Gong practitioners.

Ms. Chen Chen was arrested by officers from the Qingtongxia City Police Department on the evening of October 29, 2020. She was scheduled to be tried by the Litong District Court on April 23, 2021.

Ms. Yang and Wu (first name and gender unknown) were arrested by officers from the Beigang Police Station on the morning of April 15, 2021, after they were reported for talking to people about the persecution of Falun Gong. They were taken to the police station and interrogated. Ms. Wang was released. Wu was taken to the Nanhu Police Station in Wu's residential area and later given 10 days of administrative detention.

Ms. Sun Yiqing was harassed at home by two officers from the Dayao Town Police Station on the afternoon of April 7, 2021. The officers seized all her Falun Gong books and told her daughter, “If other agencies come, tell them you no longer practice Falun Gong.”

Mr. Li Tiefeng was harassed at home by two officers from the Xincheng Police Station one evening in March 2021. The officers questioned him and asked if he still practiced Falun Gong. They said they were following their superiors' orders.

Ms. Pan Xiangli received a call from the Huangheya Police Station in March. The caller ordered her to report to the police station and answer questions.

Ms. Liu Meili did not return home after she went shopping on April 11, 2021. Her husband called the Nanganqu Community at 8:30 a.m. on April 12th, and learned that she was given 15 days’ detention. No reason was given.

Ms. Qiu Ziqun, in her 80s, was repeatedly harassed during March and April 2021 by people from police department, Political and Legal Affairs Committee, police station, and community office.

Officers from the Dongxing District Police Department came to her home on March 8, 2021. They brought a document and said if she signed it, they would stop prosecuting her. She refused.

On March 10 and 31, four people came to her home and demanded she sign. She refused. The community secretary then called her son to the community office and made him sign the document for her.

On April 12, Dongxing District Political and Legal Affairs Committee secretary, clerks from the community, officers from the police station, and an internet monitoring agent photographed and videotaped inside her home and tried to force her to sign the document. She refused. They verbally abused her and cursed Falun Gong and its founder. They threatened to stop her pension and made other threats. One of them, whose last name was Huang, took away two Falun Gong books by force and tore down a pair of couplets posted on her door.

Ms. Wang Cuixia’s case was submitted to the Wanrong County Procuratorate. Her lawyer went to the Yanhu District Detention Center to visit her in mid-April 2021. But guards said the procuratorate did not allow anyone to visit her.

Ms. Wang Enfang of Wanrong County was taken from her home to the Wanrong Brainwashing Center by officers and agents from the Wangrong Political and Legal Affairs Committee on the evening of April 11, 2021.

Mr. Peng Junnan, 78, a retired middle school teacher, was arrested by officers from the Chengdong Police Station on the morning of April 18, 2021. Someone reported him when he talked to people about the persecution of Falun Gong in the Yingbei Town Open Market. The officers seized his Falun Gong pamphlets, keepsakes, USB drives, and other items. He was released in the afternoon.

Ms. Chen Daoyu was sentenced to eight months in prison at the end of July 2020. She was incarcerated in the Anhui Province Women’s Prison and released on March 23, 2021.

Ms. Zhou Xiuhua’s case was returned by the Hanyang District Procuratorate in mid-March 2021. She is still being held at the Wuhan City No. 1 Detention Center.

Ms. Zhi Haihua, Ms. Liang Xiuyan, and Xie Guohua (gender unknown), were harassed at home on the evening of April 3, 2021. Deputy director Jia Jiubin, two officers from the Niangniangzhuang Township Police Station, and village security officer Dou Zhiyong entered their homes without showing any identification. One officer held a camcorder on his shoulder and videotaped the entire time. The officers threatened Xie and Ms. Zhi, saying their children’s education would be jeopardized and they would be denied higher education if Xie and Ms. Zhi did not sign the guarantee statement renouncing Falun Gong. They refused to sign.

The group went to Ms. Liang’s home. She was not there. Her granddaughter was terrified by the officers and cried hard.

Officers from the Beihezhuang Police Station went to Houjiazhuang Village with the intention to arrest Ms. Duan Lianque on the morning of April 9, 2021, but they failed.