(Minghui.org) The Independent Book Publishers Association (IBPA), the largest publishing trade association in the United States, recently announced winners of its annual Benjamin Franklin Award between May 11 and 14. Among the winners were Minghui Report: The 20-Year Persecution of Falun Gong in China by Minghui Publishing. 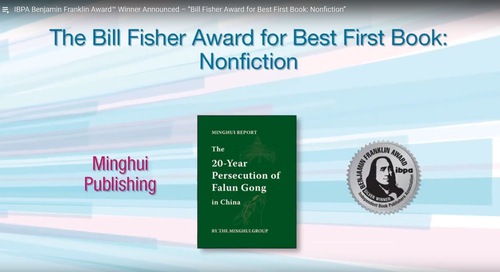 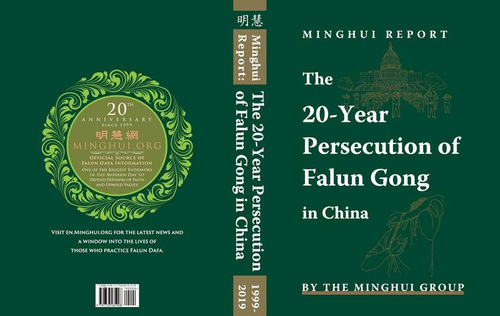 Minghui Publishing: Voice for Those Who Are Silenced 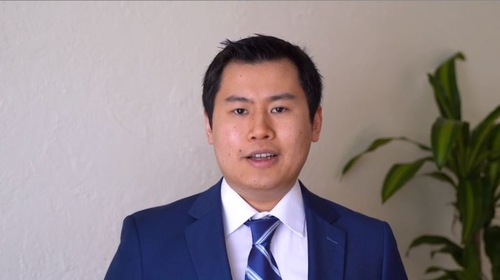 David Li accepts the award on behalf of Minghui Publishing in the IBPA award ceremony on May 14, 2021, which was held online due to the pandemic.

David Li from Minghui Publishing accepted the award and thanked the IBPA for the recognition. “As a new publisher, we’re honored to be able to give a voice to a group of peaceful meditators in China who have been brutally persecuted simply for upholding their faith,” he said.

“This book would not have been possible without an amazing team of volunteers at our parent organization, Minghui.org,” he continued, “Every single day for almost 22 years, they’ve stayed in contact with Falun Gong practitioners in China and documented their cases for human rights organizations and government leaders.”

Li highlighted the team effort that made the milestone work possible. “We can only imagine the courage it took for these practitioners to get this information out of China despite the censorship and surveillance, and they've done so at great personal risk. I also know these volunteers have spent many sleepless nights working on this project,” he said.

For the new publisher, this book is just the beginning. “We still have a lot of work ahead of us, and we’ll keep working diligently. We greatly appreciate this honor from IBPA,” Li said.

Falun Gong is a meditation system based on the principles of Truthfulness-Compassion-Forbearance. Several years after its introduction in 1992, it attracted about 100 million practitioners due to great health benefits and spiritual guidance. After the Chinese Communist Party (CCP) began to suppress it in 1999, however, a large number of practitioners have been arrested, detained, imprisoned, and tortured for their belief.

Due to the CCP’s censorship inside China and its massive influence in the international community, very few media outlets have covered the persecution of Falun Gong even though it is one of the largest human rights violations in the modern world. Minghui, a website run by Falun Gong volunteers, has documented the atrocity for the past 22 years and made its content available in 19 languages.

Citing firsthand evidence and testimonies from Minghui, The 20-Year Persecution of Falun Gong provides many details that illustrate the scale, severity, and nature of the persecution. From detention and brainwashing centers to the suffering of children targeted by the CCP, from torture methods to psychiatric abuse and organ harvesting, this book is the first of its kind to expose the modern-day terror in its entirety.

In addition to suppressing Falun Gong in China, the CCP has threatened practitioners and officials outside its borders, blocked the flow of information, and spied on other nations as part of its persecution campaign. The CCP has constantly engaged in these illegal acts in the past few decades to target groups it considers a threat to its totalitarian rule.

Published in 2020, Minghui Report: The 20-Year Persecution of Falun Gong in China not only details the persecution but also highlights the key roles of the extralegal 610 Office in the tragedy. The depth and breadth of the content make it a strong reference for legal experts, human rights advocates, business leaders, scholars, and politicians.

“Minghui Report: The 20-Year Persecution of Falun Gong in China is based entirely on firsthand information collected by the Minghui Group (www.Minghui.org) from China and around the world. This milestone report gives readers a comprehensive, genuine experience of the past twenty years of persecution faced by Falun Gong practitioners in mainland China and the Chinese Communist Party’s (CCP) extension of the persecution overseas through its intimidation of leaders and businesses in other countries,” he wrote.

Former Australian NCC President: Minghui Book “Deserves To be Found in Libraries Around the World”

Peter Westmore, former president of the National Civic Council (NCC) in Australia, also wrote a book review in the August 8, 2020, issue of News Weekly, highly recommending it to libraries as well as government officials. 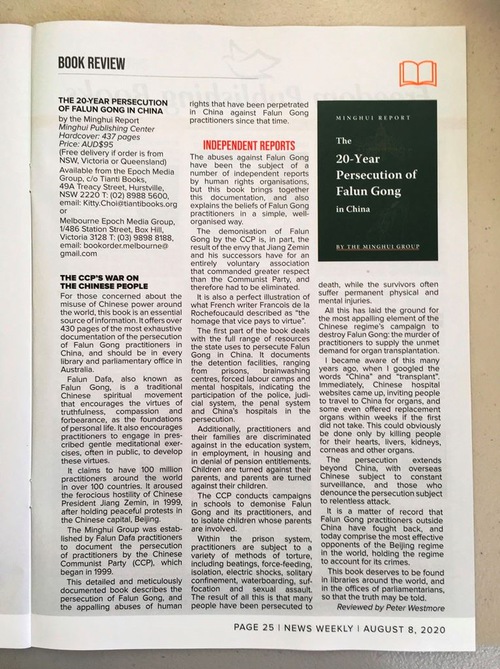 Compared to other reports from human rights organizations, “this book brings together this documentation, and also explains the beliefs of Falun Gong practitioners in a simple, well-organized way,” he said.

Furthermore, he said organ transplants with extremely short wait times “could obviously be done only by killing people for their hearts, livers, kidneys, corneas and other organs,” referring to the CCP’s state-sanctioned killing of Falun Gong practitioners for organs.

In summary, the book serves as a record “holding the regime to account for its crimes.” Therefore, the book “deserves to be found in libraries around the world, and in offices of parliamentarians, so that the truth may be told.”

Writer: Hope in the Darkness

Zhang Lin, a renowned Chinese dissident and writer, congratulated Minghui on the award. He said it shows the importance of Falun Gong practitioners’ consistent efforts to expose the brutality and end the persecution. The award is not only an encouragement for Falun Gong practitioners but also all Chinese who seek freedom, he said.

Zhang also said he admires the work of Minghui as a platform that makes the facts widely available and exposes the CCP’s brutality. He said its volunteers have put in great efforts through the years and that the award and recognition will allow more people to be aware of the situation in China.

Among all groups persecuted by the CCP, he said Falun Gong practitioners know the regime the clearest. Tens of millions of practitioners have been suppressed in the past 22 years, but by following the principles of Truthfulness-Compassion-Forbearance, they stay true to their faith and have sacrificed selflessly for Chinese people.

An engineer at an IT firm in Taiwan named Li was very impressed after reading The 20-Year Persecution of Falun Gong. From sympathy for the mistreatment of practitioners for their belief to practitioners’ perseverance, Li decided to take up the practice of Falun Gong as well.

Li said the book is a great historical record. Whenever he thinks of practitioners suffering tremendously for trying to be better citizens, he said he was often in tears. In a society full of moral degeneration, he said, few people are able to stand up for their principles like Falun Gong practitioners.

China has a long history of tradition and faith. Li hopes more people will have a chance to read the book and get a clear understanding of the CCP and the harm it has brought to Chinese civilization. “That will help us find who we are and where we belong,” he said.