Once Incarcerated for Eight Years, Ningxia Woman Gets Another Four Years for Her Faith

(Minghui.org) A Yinchuan City, Ningxia Province resident was sentenced to four years on February 25, 2021, for her faith in Falun Gong, a spiritual and meditation discipline that has been persecuted by the Chinese communist regime since 1999.

Ms. Shan Jining, 54, was arrested on August 22, 2020 for distributing information about how the communist regime covered up the coronavirus pandemic using tactics similar to those employed in the persecution of Falun Gong. The police submitted her case to the Xixia District Procuratorate on September 28. The prosecutor indicted her on December 11 and forwarded her case to the Xixia District Court.

Ms. Shan appeared in court on January 7, 2021 and was sentenced to a four-year prison term plus a 20,000 yuan fine on February 25. She appealed the verdict with the Yinchuan City Intermediate Court and is now awaiting the result.

Prior to her latest sentencing, Ms. Shan was given two labor camp terms and two prison terms, for a total of eight years (not counting a three-year probation term), for upholding her faith.

After the communist regime ordered the persecution in 1999, Ms. Shan went to Beijing twice to appeal for the right to practice Falun Gong. She was arrested and taken to the Yinchuan Detention Center in October 2000. During that time, she was forced to tear the wires in used tires.

On January 4, 2001, she was given two years at the Ningxia Women’s Forced Labor Camp. Because she refused to renounce Falun Gong, the guards force fed her, hung her up by the wrists, and tied her up to a tree to expose her to the scorching sun and insect bites.

The guards once slapped her in the face when she tried to stop them from torturing other practitioners. Her glasses fell off. The guards then shocked her with electric batons, handcuffed her hands behind her back, and dragged her back to her cell.

Ms. Shan was arrested again on November 5, 2004 for distributing informational materials about Falun Gong. She was given another three years at the Ningxia Women’s Forced Labor Camp on December 1. When her term expired, she was taken to a brainwashing center for further persecution.

Two years after she was released, Ms. Shan was seized at a public plaza on October 17, 2009, for talking to people about Falun Gong. She was held at the Yinchuan Detention Center. The Xingqing District Court sentenced her to three years with five years probation on April 1, 2010.

For distributing informational materials about Falun Gong, Ms. Shan was arrested one more time on November 13, 2015. She was taken to the Shizuishan Detention Center on November 16 and was beaten and interrogated.

Seven days after her arrest, on November 20, the police also seized her husband, Mr. Wang Desheng, after monitoring him through a surveillance camera. Their residence was ransacked and their office supplies, valued at 100,000 yuan, that they used to print pamphlets at home were confiscated. Their private car was also impounded.

Mr. Wang was tied up on a tiger bench at the police station for sixteen days and deprived of sleep. 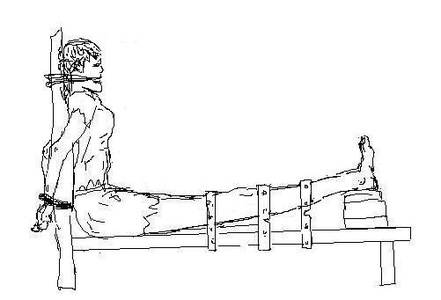 While serving time at the Ningxia Women’s Prison, Ms. Shan was handcuffed and shackled to the ground. She was emaciated from the torture. The guards constantly verbally abused her and threatened to intensify the torture against her. 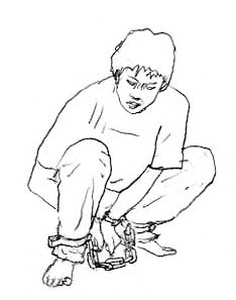 Torture illustration: Handcuffed and shackled to the ground

After enduring three years of hellish torture, Ms. Shan was released on November 14, 2018.

Once Incarcerated for Eight Years, Ningxia Woman Arrested for Her Faith Again

Lawyers: “My Clients Were Tried on Trumped-up Charges”