(Minghui.org) May 13, 2021, was the 29th anniversary of the public introduction of Falun Dafa (also known as Falun Gong) and the 70th birthday of Dafa’s founder Mr. Li Hongzhi. To celebrate the occasion, Falun Dafa practitioners in Montreal and its surrounding cities organized a parade on Saturday, May 8, 2021. 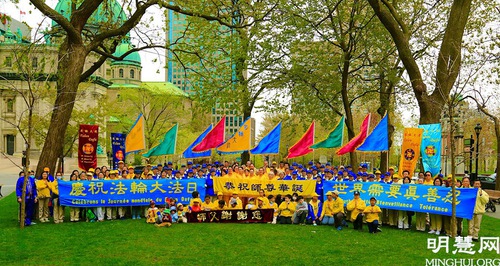 The parade began at Cabot Square and wound its way through downtown. Many tourists were drawn to the event, and some followed along. 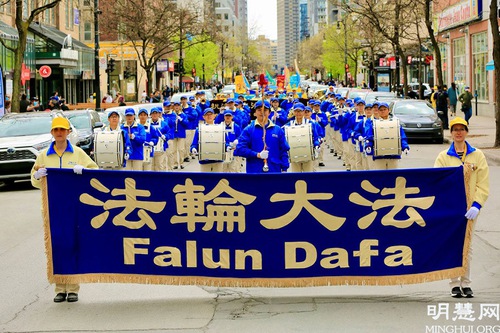 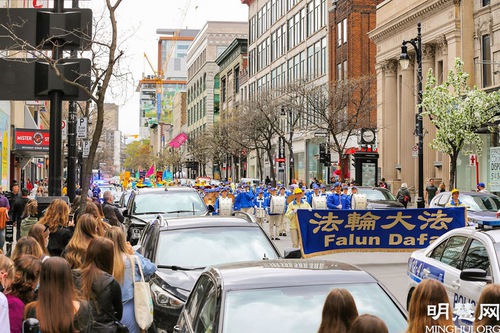 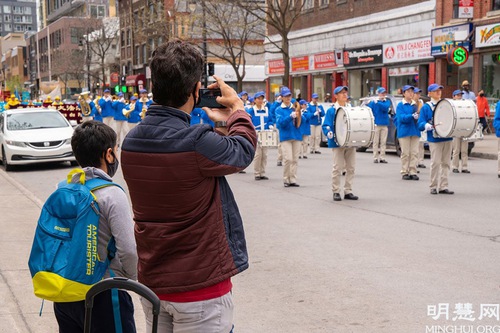 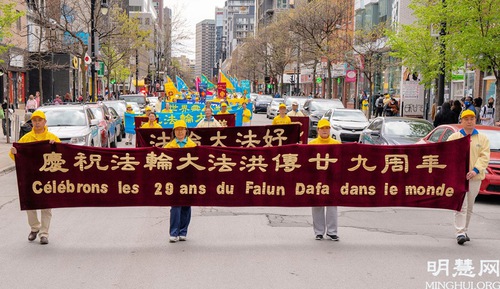 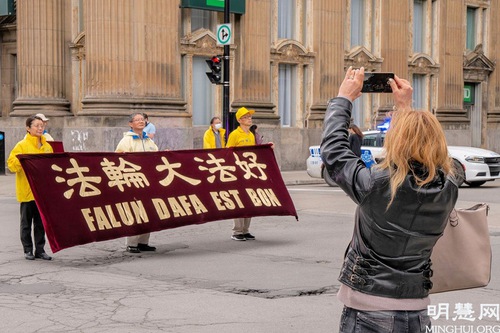 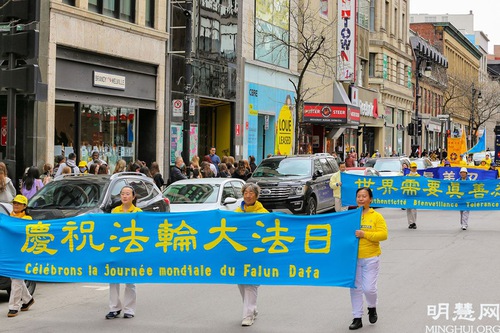 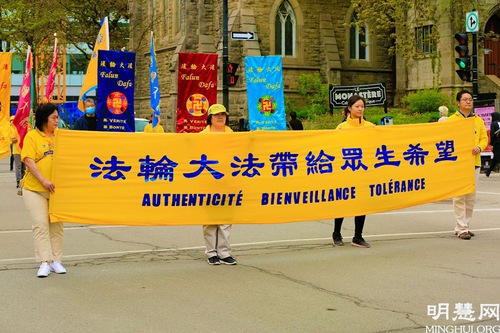 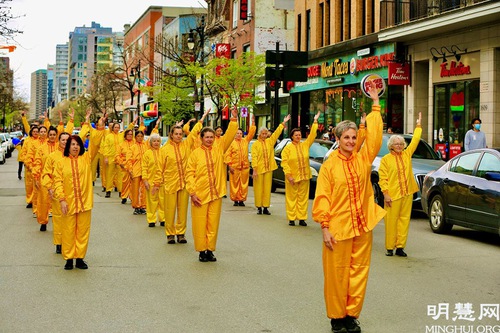 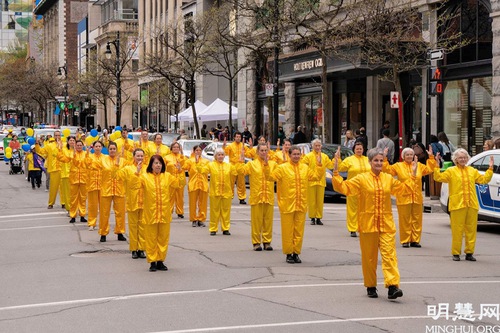 Wiam Emili said that the parade was surrounded by positive energy and made her feel good. “Truthfulness-Compassion-Forbearance is important to everyone, and it brings us hope.” The parade made her feel the world would return to normal and get over the pandemic. She said there were many negative things in the world, but all she saw in the parade was warmth and positive messages. 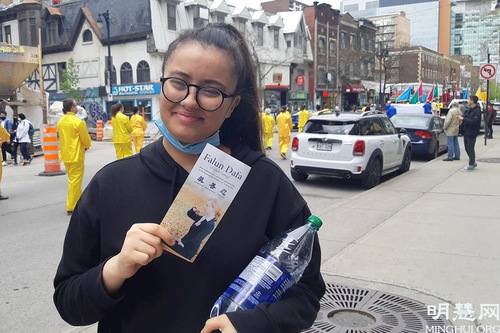 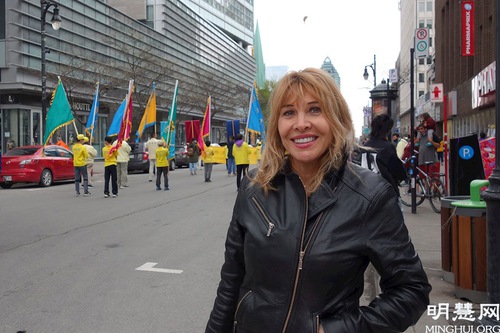 Chantal, manager of a Montreal fitness center, said the parade warmed her heart. “Everyone in the parade is smiling. They are so peaceful. The world needs Truthfulness-Compassion-Forbearance, especially now.”

Buenos, the owner of a Montreal company, came downstairs to record the parade when he heard the music of the Tian Guo Marching Band. He said, “I love their music. We need this kind of music, because it is filled with positive energy.”

He said he agreed with Falun Dafa’s principles of Truthfulness, Compassion, and Forbearance. “I support this message, because this is what human beings need. Over the last two decades, people’s lives, which were full of stress, have changed a lot. Truthfulness-Compassion-Forbearance is not only necessary during the pandemic, it is also something that people need to live by throughout their lives.”

Mr. Li, who came from China several years ago, saw a Falun Dafa contingent in the Canada Day Parade earlier in the year. He said that the Falun Dafa parade is always very peaceful and makes people feel good.

Mr. Li said, “It is not easy to follow Truthfulness-Compassion-Forbearance. Society today is driven by money, especially if you live in China. It is difficult to improve people’s moral standards if the government does not promote the values of Truthfulness, Compassion, and Forbearance.”

Kelly, a member of the Tian Guo Marching Band, said, “I am grateful to Master Li for bringing Falun Dafa to the world.” 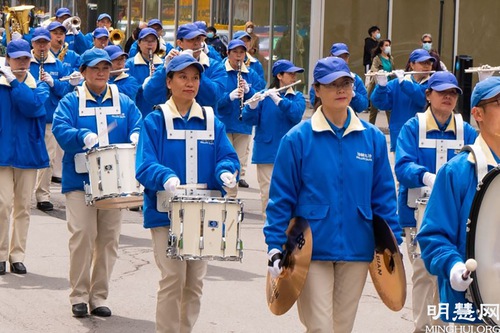 Kelly, a member of the Tian Guo Marching Band (2nd from right)

“Before the parade, we all hoped that people would hear our music. I was moved to tears when we started playing,” Kelly said. “I am so happy to see people’s support and appreciation.”

When the parade arrived at Dorchester Square in downtown Montreal, Falun Gong practitioners expressed their gratitude and wished Master Li a happy birthday.

Falun Gong practitioner Collins said that after practicing Falun Gong, she became physically and mentally healthy. Her family also benefited from it. 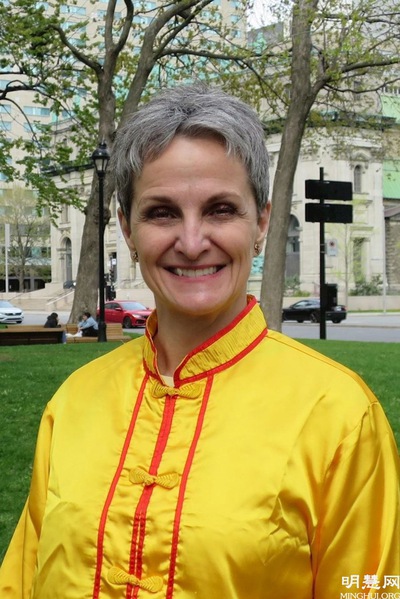 Collins is the assistant director of a Montreal company. She heard about Falun Gong twice. Her hairdresser recommended Falun Gong to her first, and later her therapist asked her to give it a try.

Collins became a better person by following the principles of Truthfulness, Compassion, and Forbearance. She gained more confidence. Influenced by her, her husband became cheerful and friendlier. Her family has become even more harmonious. She said, “Dafa is great, and I am grateful to Master.” 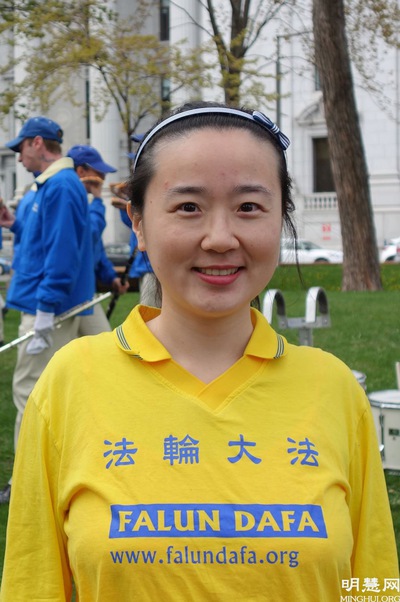 Zoe, a young practitioner who lives in Montreal, once practiced Falun Gong with her neighbors when she was a child. She stopped practicing it after the Chinese Communist Party (CCP) launched its persecution of Falun Gong in 1999. When she was growing up, she always felt lost when she saw that most people were pursuing fame and self-interest.

Fortunately, after graduating from college, Zoe returned to cultivation. She rediscovered the meaning of life, and her negative thoughts gradually disappeared. She said gratefully, “Dafa has taught me the true meaning of life, and I became a positive and cheerful person. Thank you, Master!”