(Minghui.org) Bernard Anthony, a former member of European Parliament (MEP) from France, said in an interview on March 27 that he had spent his entire life combating communism. It is a fight between facts and lies.

Anthony, 75, used to work in the pharmaceutical industry in France before he served as an MEP for 15 years. He warned that, although the Berlin Wall has fallen, communism still exists in China and keeps expanding globally. Therefore, ending communism is a responsibility for all of us. 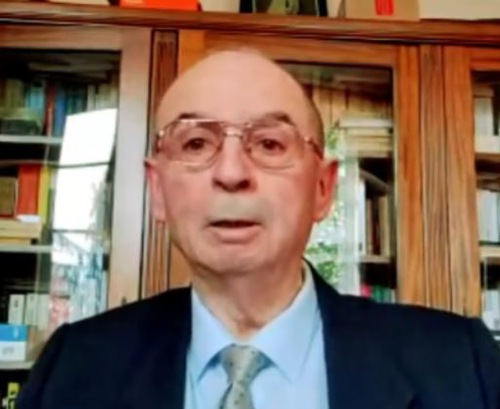 Bernard Anthony from France is a former member of European Parliament (MEP).

More Dangerous Than the Virus

Anthony said communism had killed at least 100 million people and brought misery to billions of citizens around the world. This makes communism more dangerous than the ongoing coronavirus pandemic, and it can be considered a virulent variant of the virus.

Anthony said it is necessary for us to counter the CCP so that the tragedy that Chinese people are experiencing will not spread to France and other parts of the world.

When asked about his motivation for fighting communism in the past several decades, Anthony replied that with a deep faith, he has love for his nation, home, and freedom and thus does not want to see all those annihilated by communism through its killing and genocide.

Because the issue of fighting communism is beyond any one country's capability, he proposed to tackle the issue on an international level.

The reporter who interviewed Anthony said there are many discussions on the genocide committed by the Nazis, but much fewer talks on the CCP's atrocity against Falun Gong practitioners in China. Because of their belief in Truthfulness-Compassion-Forbearance, Falun Gong practitioners have been severely tortured and some even became victims of the forced organ harvesting.

Anthony said this is the worst case we could imagine. For example, there are probably 100 films on the Nazi crimes, but only one on the brutality of communism. Therefore, people tend to focus on the former. In the past few years, Anthony has worked hard to advance trials against both the Nazis and communism. For example, he had a meeting in Paris urging an international court to process crimes committed by the CCP.

The brutality of communism can be traced back to the French Revolution, he added. One example is the War in the Vendee region. The brutality of the CCP is also unprecedented. Anthony cited former CCP leader Mao Zedong, who once vowed to kill 100 times the scholars killed during the reign of Emperor Shihuang in the Qin Dynasty. But based on numbers of victims from various political movements, the number of intellectuals Mao actually killed was at least one thousand times that during the rule of Emperor Shihuang, who executed 400 scholars.

Communism Is an Evil Religion

Anthony said communism is not something new. Although it appeared as state power for the first time when the Soviet Union was established in 1917, its theory had existed long before that. Some people believe there were ideologies similar to communism in Europe during the Middle Ages. Their common grounds are confiscation of private property, abolition of family, taking wives from others, and cutting off ties between parents and children. With all these changes, the only thing left is pursuit of materialistic pleasure.

All these indicate that communism is a demon, a man-made disaster that has infested the world. Ironically, although communism opposes religions on the surface, it is essentially a demonic religion itself. With Marxism as doctrine and communist members and administrators as clergy, it has possessed ultimate power.

In China, for example, the CCP has infiltrated many religions and brainwashed pastors. As a result, those people are often spreading the communism ideology on behalf of the CCP.

Anthony said communism has been pushed through various countries including France. It is dangerous to assume the threat of communism is gone with the collapse of the Berlin Wall.

Of course, the fall of the Berlin Wall was progress. But that was not enough. This is because communism still exists in China, North Korea, and Cuba. Even in France, its ideologies exist in a subtle, secret way, especially within the public education system, universities, and news media.

For example, Vladimir Lenin founded the All-Russian Extraction Commission in 1917. Commonly known as Cheka, it is a secret police organization. Certain media in France are playing such roles. Furthermore, communism has dominated many cultural areas of the French society.

In addition, France had given many products and technologies to China. There are actually a number of lobby groups who unconditionally advocate for China’s interest. Like former Prime Minister Jean-Pierre Raffarin, they have tried all means to reach deals with communist China.

When he was still a businessman, Anthony said he had attended forums to sell Airbus airplanes to China. France also met the request from China to provide its manufacturing process so that China would not need to buy airplanes from France several years later. France had lost these technologies to China just like a toad unwittingly becoming a prey, when it is charmed by the opened mouth of a cobra.

Not Collaborating with CCP in Any Form

In a recent article, Anthony emphasized that we should know that the threat from the CCP not only affects Chinese people, but also other countries.

China has stolen many industries from France. When selling products to China, France also gave away technologies. This happened in the aircraft industry and some other businesses. Anthony said the current situation with the pandemic is disappointing. Coming from the pharmaceutical industry, he knew France once dominated in pharmaceuticals. But those days are gone, because the CCP has taken control of both the economy and ideology.

One may wonder why China wants to develop aircraft carriers or equip nuclear weapons on its intercontinental rockets. Apparently, invading Taiwan is not its end goal. Expanding its military power to other regions fits its agenda of securing its economic dominance.

Citing quotes from Pope Pius XI, Anthony said communism is fundamentally evil and history had proven this. Therefore, to preserve our civilization, we should not collaborate with communism in any form.

Letting more people know these facts through radio and television stations is very important, said Anthony. Thousands of people from various backgrounds had supported him for an international trial against communism. But it still has not become a reality. For the Nazis, the Nuremberg Tribunal had executed key criminals. Right now, the focus is not whom to execute; Rather, we need to explain facts of history and establish a detailed record.

Anthony said the society we are living in is messy, but we have to face it. The education system has flaws and the media system has been infiltrated. That is why more independent and free radio and television networks are needed. We need to work on building these networks because it is not fighting for an ideology, but a battle for truth.