April 5, 2021 |   By a Minghui correspondent in Heilongjiang Province, China

(Minghui.org) A Jiamusi City, Heilongjiang Province resident has filed an appeal against the 3.5-year prison sentence for her faith in Falun Gong, a spiritual and meditation discipline that has been persecuted by the Chinese communist regime since 1999.

Ms. Jing Yuhua, a 64-year-old retired heating company employee, was arrested outside of her apartment building by police officers on the lookout on August 31, 2020. The police took her keys and confiscated her Falun Gong books, computer, and other personal belongings.

The police interrogated her at the local police station, before taking her to the Jiamusi City Detention Center, where she has been held since.

When Ms. Jing’s husband went to the police station to seek her release, the police said her case is a “political case” and none of them has the authority to release her.

Her husband later found out that the police had been looking for Ms. Jing with her photo for a few days before arresting her. Staff members of the residential committee also participated in her arrest.

Ms. Jing appeared in court in late December 2020. Her husband attended the hearing and testified that the computer and printer confiscated by the police belonged to their son, who used them for his personal business. He added that the 5,000 yuan in cash taken away by the police was saved for Ms. Jing to pay for her dental care. The presiding judge, Ji Zhong, stopped him and threatened to remove him from the courtroom if he continued.

Ms. Jing took up Falun Gong in August 1995. She had been a frequent visitor to the hospital, but shortly after learning Falun Gong, her hepatitis, inflammation of the gallbladder, abnormal enlargement of the spleen, and headache all disappeared.

After the communist regime launched the persecution, Ms. Jing was arrested multiple times for upholding her faith. She was given three years of forced labor and subjected to various torture methods in custody, including beating, force feeding, injection of unknown drugs, and being handcuffed to a ring on the floor. To avoid further persecution, she was forced to live away from home. The police instead harassed her family and extorted a large sum of money from her and her family. 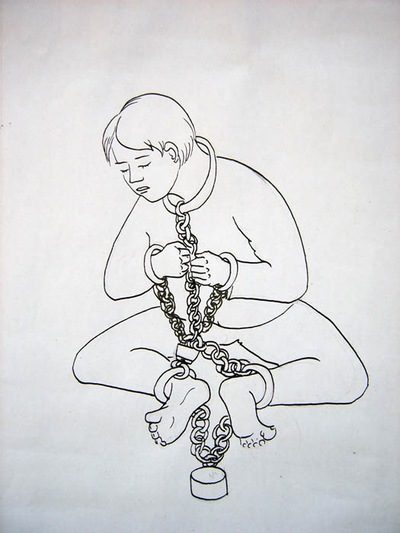 Torture illustration: shackled and handcuffed to the floor