Canadian MP: Facing Persecution from the CCP, Falun Gong Practitioners Are the Most Persistent

(Minghui.org) Falun Gong practitioners have encountered brutal persecution in China, as documented in reports from members of parliament (MPs) in Canada. Meanwhile, they are one of the most persistent groups when facing attacks from the Chinese Communist Party (CCP), explained Canadian MP Kenny Chiu in a recent interview.

Chiu is a vice-chair of the Subcommittee on International Human Rights (SDIR). When speaking with NTD Television on April 1, he said whenever visiting Hong Kong, he was moved by Falun Gong practitioners' peaceful demonstrations against the CCP's persecution. This reminded him that Hong Kong used to be a safe place for practitioners to express their opinion and expose the brutality they had suffered under the CCP regime. 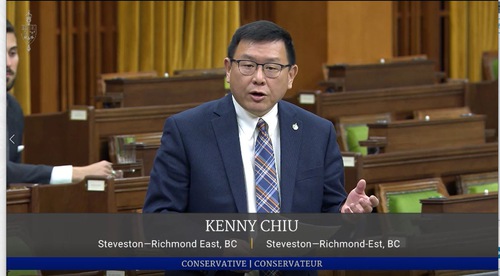 Kenny Chiu is a vice-chair of the Subcommittee on International Human Rights (SDIR) in Canada.

Hong Kong Is Losing Its Freedom

Chiu said that freedom in Hong Kong no longer exists. This is because the CCP has tightened its grip of the region using various excuses. It includes news censorship that deprives people of access to film, television programs, and books. The information flow was also restricted. Due to the great firewall of China, Google, Facebook, and Twitter are not functioning on Chinese cell phones or other electronic devices with internet connections.

The CCP has been under the scrutiny of the entire world. This is because how badly the regime has treated people in Hong Kong. Chiu said Hong Kong has lost its freedom of information, freedom of press, freedom of speech and religion.

He emphasized that not only Hong Kong’s political system is under attack, but the freedom of Xinjiang, Tibet, Taiwan, and other neighboring nations are also being threatened.

CCP Does Not Represent China or Chinese People

Chiu said that it is important to differentiate the CCP and China and that Chinese people everywhere in the world are not the same as the vicious CCP regime.

For thousands of years, China has been recognized for its long history and advanced culture. The CCP, on the other hand, was imported to China from Germany and the Soviet Union. It is a foreign entity that has occupied China for about 100 years.

Well-educated Canadians, whether Chinese Canadians or others, would know the CCP is different from Chinese people and would not equate the CCP regime with Chinese culture or history. The CCP is only a ruling party that has been controlling China since 1949 and it does not represent China.

Therefore, we should be clear that when someone criticizes a government, it does not mean the nation or its people are being attacked. This is especially the case in the modern days when there are lots of false information and narratives. Some people are also mixing this up. For example, the CCP may argue that when the regime is criticized, the criticism also goes to China and its people.

Chiu said the CCP lacks confidence and does not tolerate any criticism. As a result, other than those who have installed a VPN to bypass the firewall or those who have fled elsewhere, more than one billion Chinese people continue to be surrounded by false information from the CCP propaganda.

Moreover, pro-CCP content can be found on YouTube in Canada and the free world. In fact, official opinions from the CCP have existed on our social media and those falsified claims have been propagated on Twitter.

He believed people in Canada and around the world could see through these. The CCP does not represent China, people in China, or people with Chinese heritage in Canada, U.S., and other places in the world.

People need to tell the difference and understand that the CCP does not represent the Chinese nation. In fact, Chinese people are also suffering at the hands of the CCP regime and tens of millions of people have lost their lives because of the CCP's brutality.

The CCP’s Vengeful Sanctions Are an Affront to All Citizens

The CCP announced on March 27 sanctions against three individuals in U.S. and Canada along with SDIR in which Chiu is a vice-chair. Such an attempt to threaten elected officials in the democratic society is strange. It is a retaliation against a recent 266-0 motion in the Canadian parliament that designated the suppression of Uyghurs in Xinjiang, China, and some other minority groups as genocide. The CCP's sanctions are a retaliation against sanctions from the U.S. and Canada that have sanctioned human rights perpetrators in China.

Chiu said he and other officials had urged the Justin Trudeau administration to implement the Magnitsky Act to sanction CCP officials for their brutality. Doing so would redress injustice suffered by the victims.

Retaliation from the CCP targets elected remembers of the parliament. By attacking elected legislative members, the CCP is attacking all Canadians, because their representatives passed the motion unanimously.