(Minghui.org) Falun Gong practitioners have held activities in downtown Munich and at the Chinese Consulate once a week since the beginning of 2021, despite the harsh weather and travel restrictions.

An information day event was held last week at Marienplatz on March 30, 2021. Practitioners exposed the brutal persecution of Falun Gong by the Chinese Communist Party (the CCP). 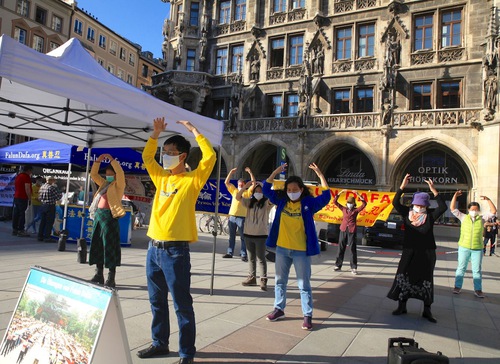 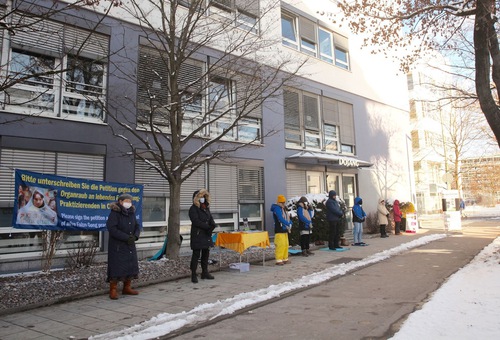 A peaceful protest at the Chinese Consulate in Munich on February 11, 2021, Chinese New Year’s Eve 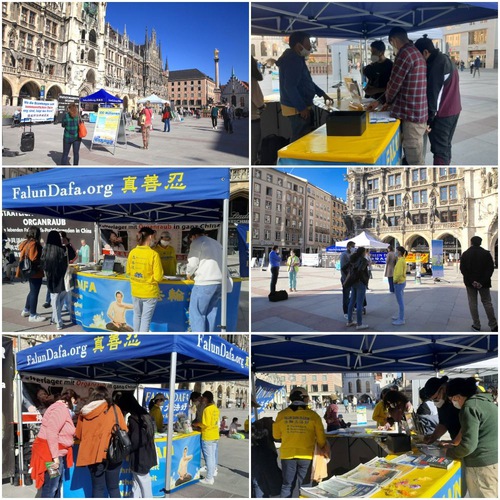 Falun Gong information day event at Marienplatz on March 30, 2021, many people learned about the persecution and signed a petition calling for an end to the CCP’s brutality 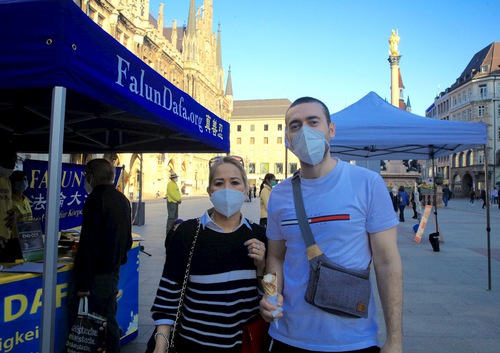 Mr. Sanad Imamovic and his friend Maria Theresa Acosta are both healthcare workers. After hearing that Falun Gong has been persecuted for 21 years in China, Ms. Acosta said Falun Gong practitioners should have the right to continue practicing their faith. “What have they done to be jailed, have their families broken, and their organs stolen?” Ms. Acosta asked indignantly.

Mr. Imamovic couldn’t understand why the CCP persecuted Falun Gong practitioners and said, “Chinese authorities banned Falun Dafa, a practice that benefits people and has done no harm to anyone. [The practice] is good and benefits society. Who in the world doesn’t desire better health?”

Ms. Acosta’s daughter works in the operating rooms in Erding Hospital and has seen human organs without origin documentation that were air freighted from Asia. “She [my daughter] told me that a rich person paid 500,000 Euro and quickly received an organ by air. Other people had been on the waiting list for two years and had to continue their wait. Hospitals, doctors and politicians all know about this but the entire society chooses to turn a blind eye to it,” Ms. Acosta said.

Ms. Acosta believed the world must do something to stop the organ harvesting crimes in China. “It is worse than the coronavirus pandemic. The organ pillaging has been on-going for many years,” she said.

“This Crime Must Be Stopped!” 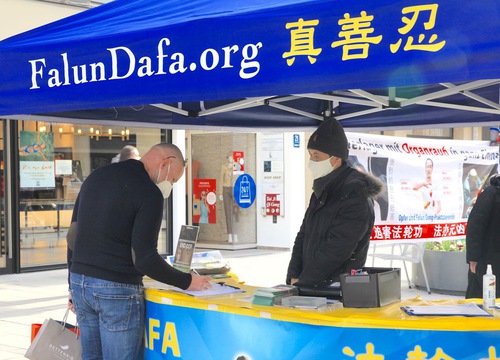 An information day event at Sendlinger Straße on March 20, 2021

Jakob came across Falun Gong’s information day event at Sendlinger Straße, a pedestrian shopping street in Munich’s city center, on March 20, 2021, and signed the petition after having a short chat with a practitioner.

“I walk by occasionally and learned that stealing Falun Gong practitioners’ organs has been happening all over China. I am very surprised,” said Jakob, who often travels to China and has many friends and acquaintances there, “[We] must stop any kind of torture and violence. This crime must be stopped!”

A young Chinese man passed by the information day event at Moosach in Munich and told a practitioner that he didn’t believe in any religion. The practitioner said, “No matter whether you have religion or not, belong to any political party or not, you want to be a good person, am I right? Our practice is from the Buddha school. It is persecuted by the Chinese Communist Party.”

The young man suddenly showed interest in the Buddha school and wanted to read Zhuan Falun. After receiving the website address where he could read the book, he agreed to quit the CCP and its two affiliated youth organizations. The practitioner suggested a pseudonym for him “Hui De,” because Hui means wisdom and De means Germany. The young man was very happy and said this could be his Buddhist name.

The young man explained his quick decision. He said had received an anonymous phone call when he was in China from a Falun Gong practitioner, who told him about the persecution. He had also received Falun Gong truth-clarification fliers from practitioners, so he knew about the forced organ harvesting crimes. 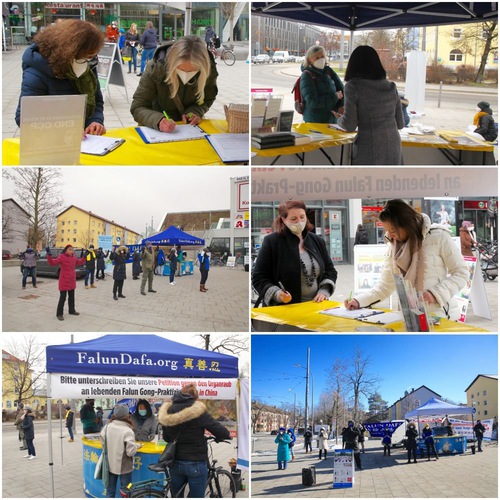 Ms. Isolde signed the petition at Marienplatz and talked to a practitioner. “The information I see here is outrageous. It is shocking to learn these things are happening in China. Organ harvesting should never be allowed to happen,” she said, “I also want to know the true origin of the coronavirus, but we may never know the truth.”

A woman told a practitioner during an information day event at München Pasing Station that she had learned the Falun Gong exercises over the past week at the Station. She and her daughter had since been doing the exercises by following some instructions online. “The exercises have allowed me to calm down and feel peaceful,” she said. She signed the petition and said the torture used on Falun Gong practitioners was very cruel.

An older woman signed the petition and told a practitioner that a book about Falun Gong with pictures of the exercises had passed through many hands and landed in her possession. She had been looking for someone to give her more information about the exercises. A practitioner gave her information about a local group practice site and a paper lotus flower. The woman was very happy and said she believes that her encountering the event was meant to be. 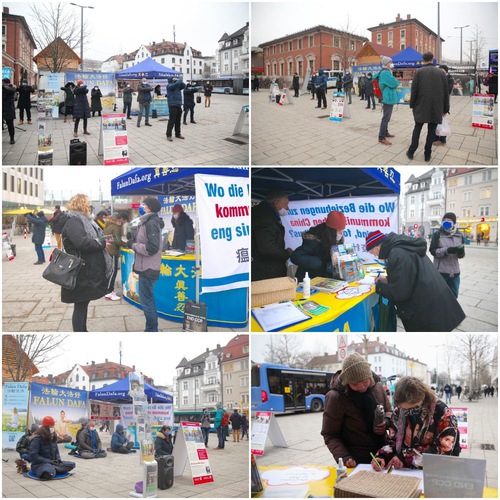 Two women read the display boards about the forced organ harvesting crimes in China and signed the petition. One lady was very sad that such things were still happening in 2021. She said she liked Chinese culture and expressed concern for the practitioners standing in the cold weather. “I wish you success! Keep up the good work!” she said.

A lady from Amnesty International left her contact information with a practitioner to discuss working together on events to end the persecution.

Another lady signed the petition and encouraged practitioners to continue their endeavors. She said the CCP is sure to perish, and people with faith have hope in their hearts that has positive influence on the world’s people.