When I worked in Beijing one of my co-workers practiced Falun Dafa. He invited me to watch Master’s nine day lecture. After watching the first lecture, I decided to practice Falun Dafa.

I sat next to the aisle. When Master walked past me, I stood up and did heshi (a gesture of respect) and greeted Master. He replied, “Good” three times. I was exhilarated.

Everyone wanted to take a group photo with Master after the lecture. When I stood next to Master I realized he was very tall. I stood on my toes and still couldn’t reach his shoulder. He asked me to move a little so I wouldn't be blocked so I moved closer to him. 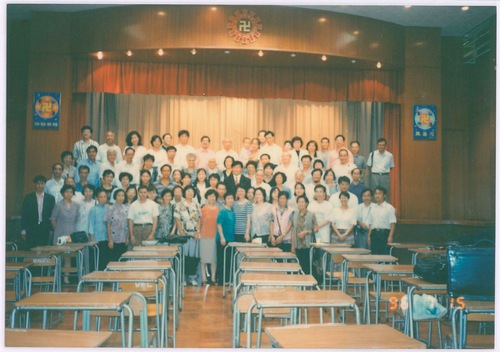 Around 70 practitioners in Hong Kong took a photo with Master at the end of the lecture given on July 15, 1995.

Master shook hands with everyone. When he left, I was lucky to be in the same elevator, and Master shook my hand again.

I took fame and work promotion lightly since I began practicing cultivation. Master spoke about building a [cultivation] base and I wanted to participate. He was about to leave. I held Zhuan Falun in my hand looking for the right opportunity to ask Master about the base. Just as he was about to get into a car I asked, “When will we build the base? Where is it going to be?” I recalled Master didn’t directly answer my question, but told me to cultivate in Hong Kong because the environment here is complicated and one can progress quickly in cultivation (these are not Master’s exact words). I gave up my plans to move to Vancouver, Canada and stayed in Hong Kong to practice cultivation.

Whenever I recall that meeting with Master, I feel immensely honored. Those memories are very precious.

The CCP (Chinese Communist Party) began to ruthlessly persecute Falun Dafa on July 20, 1999. At that time, I traveled between Hong Kong and Shenzhen for work. My house was on a hillside in Shenzhen, and I did the exercises on the hill every day. After the persecution began, I continued to play the exercise music and nothing happened.

One day when I returned to Hong Kong from Shenzhen a practitioner phoned me and asked my opinion of Zhao Jinhua from Shandong who was tortured to death. I said, “We practitioners are good people. Master taught us to be even better people. We do not participate in politics. It is the CCP who is turning the persecution into something political.”

When I returned to Shenzhen a week later, plainclothes policemen were waiting for me. Because I revealed my name when I spoke with the practitioner in Hong Kong, CCP spies in Hong Kong learned my identity. The police in Shenzhen found me.

I drove my car into the garden in my house and shut the gates. It was 10 a.m. A plainclothes policeman claiming to be checking my residence registry took out a photo of me and knocked on the door after verifying it was me. An hour later, four police officers came, wanting to take me to the Shahe police station.

The supervisor of the Nantou police station in Shenzhen phoned me and asked why I refused to open the door. I said, “I am a Hong Kong citizen. You can verify this with the Hong Kong police. What law have I violated? If I broke the law, then it should be the Hong Kong police arresting me. Since you cannot tell me what law I’ve broken, why should I open the door? I’m an upstanding citizen and I work—why do you want to arrest me? Why don’t you go catch criminals?”

I refused to open the door and was locked in a stalemate with the police.

I told my co-workers how wonderful Falun Dafa is and some of them became practitioners. When they learned I was trapped at home, they called my secretary in Hong Kong. I instructed my secretary beforehand that if he received a phone call from Shenzhen, it meant I was in trouble. I said, “If that happens, you must call the media.” He contacted the media. The matter was reported on and I appeared in the headlines of Hong Kong newspapers.

A reporter later said to me, “I heard everything you said to the police.” (I don’t know how he heard my conversation with the policemen) He said, “What you said was right. You are a regular person. All of you Falun Dafa practitioners are excellent people. You were right not to open the door.”

Protected by Master, I returned safely to Hong Kong the next day. Since then, I have been clarifying the truth and exposing the persecution together with fellow practitioners in Hong Kong.

The CCP’s state-controlled media published reports that vilified Dafa and poisoned the whole world. Dafa was being maligned and we Falun Dafa practitioners in Hong Kong were very distressed. At the end of July 1999, for several months in a row, we meditated for 24 hours across from the Xinhua news agency (the CCP's official state-run media). I worked during the day then and often came to meditate at night, usually from 12 a.m. until 5 a.m. the next morning. I would also go there during the day on weekends and holidays.

Every day, we held banners with the words “Falun Dafa is good, Falun Dafa is a righteous way” facing the entrance to the news agency and read Zhuan Falun. Reporters interviewed us. Through my celestial eye, I saw Master’s law body was there with us every day.

Usually, we would first recite Lunyu three times continuously. I saw Master’s law body telling the reporters not to move. The reporters interviewed us after we finished reciting Lunyu. Every practitioner clarified the facts about Dafa to the reporters and spoke about their personal experiences practicing Dafa. Their stories were wonderful.

One day during the day, when around 10 of us sat there reading Zhuan Falun, the glass door of the news agency suddenly shattered. We felt it was a sign that the CCP’s lies would ultimately shatter just like the glass door.

In the blink of an eye, 25 years have gone by since I began to practice in 1996. That is a quarter of a century. During this time, the other practitioners and I have been practicing diligently and solidly, assisting Master in Fa rectification. Although we have weathered a lot, our faith has become stronger. What an honor it is to be with Master and assist in the Fa rectification!