(Minghui.org) Today's news from China includes incidents of persecution that took place in 20 cities or counties in 8 provinces, where at least 35 practitioners were recently persecuted for their belief. 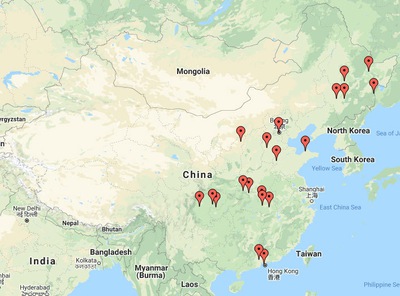 Ms. Chen Dechun, 71, was tried by the Pengzhou City Court on March 9, 2021. She made a defense statement. The trial lasted about an hour. She was sentenced to three years and six months in prison and fined 5,000 yuan.

Mr. Zhong Qiru of Linshui County was arrested for distributing Falun Gong flyers in July 2020. He was held at the Tantong Police Station. It was recently learned that he was sentenced to three years in prison. He has appealed.

Ms. Huang Yali of Anlu City lives in Shenzhen City, Guangdong Province. She was arrested on the evening of June 11, 2020, and sentenced to eight months in prison in a virtual court trial on January 15, 2021. Her family went to pick her up when her prison term was finished on February 14, 2021. But the guards said they would not release her because they had not yet received her court sentencing record. She is being held at the Nanshan Detention Center in Shenzhen City.

Dai Xinhua (gender unknown) of Macheng City was arrested in the Macheng Railroad Station by officers from the Railroad Police Station during the 2021 New Year. Dai was traveling to visit his/her son in Beijing. Dai has since been held in the Huanggang Detention Center.

Mr. Guan Yibo will be tried in a virtual courtroom by the Nanshan District Court on the afternoon of March 19, 2021.

He was arrested in the Zhulinzi Subway Station and taken to the Shenzhen City No. 2 Detention Center by officers from the Futian District Public Transportation Police Station on May 31, 2019. The Nanshan Procuratorate issued an arrest warrant on July 9 and took his case on August 29. His case was submitted to the court. He was transferred to the Nanshan Detention Center on September 16.

Mr. Shan Furong was arrested in Gucheng City on January 5, 2021. He was formally arrested and is being held at the Gucheng Detention Center.

He was sentenced to four years in prison years ago and tortured in the Fanjiatai Prison. He was fired from his job in the Jiangshan Machinery Factory after he was released four years later.

Mr. Chen Guangchang, Mr. Gao Xiaoke, Mr. Li Xupeng, and Mr. Wu Xiaojun were arrested by officers from the Shenmu City Domestic Security Division on February 12, 2021. Their homes were ransacked. They are being held at a detention center. They are not allowed visits from their lawyers or families.

Ms. Zhao Zhirong of Huachuan County was arrested in a railroad station on March 4, 2021, when she was traveling to Harbin City.

Yang Bo and others from the Heilongjiang Province Public Security Office inspected the case in Huachuan County on March 14 and 15. The three members of Ms. Zhao's family were subjected to lengthy harsh interrogations.

Mr. Cai Junlong’s wife was ordered to write three statements by clerk Lu from the community on the afternoon of March 17, 2021. She refused.

Ms. Zhang Yunxiu of Macheng City was arrested for talking to people about the persecution of Falun Gong in Macheng Pedestrian Street by officers from the Gulou Police Station on March 10, 2021. The officers took her to the police station and handcuffed her, but she managed to escape and has since stayed away from home. Police ransacked her home and have been searching for her.

Li Shuzhi (gender unknown) was arrested by officers from the Suifenhe City Domestic Security Division for talking to people about the persecution of Falun Gong on December 18, 2020. Police ransacked Li’s home and seized two pictures of the founder of Falun Gong, dozens of Falun Gong books, paper currency with Falun Gong messages worth 700 yuan, a TV satellite dish, a pack of plastic bags, and three cell phones. Police took Li to the Domestic Security Division, interrogated Li, extorted 3,000 yuan from Li, and released Li after 10:00 p.m.

Huang Kexia (gender unknown) was arrested at home on December 18, 2020. Four plainclothes officers pretended to check community entry cards. They entered Huang’s home, ransacked it, and seized over 30 Falun Gong books, paper currency with Falun Gong messages worth 1,000 yuan, a big bag of Falun Gong printouts, a box of magnets, and a cell phone. Huang was taken to the Suifenhe Domestic Security Division for interrogation and released at 10:00 p.m. after police extorted 3,000 yuan from Huang.

Ms. Hou Yuxin was phoned by a case officer from the Pingxifu Police Station. She was told that her house arrest term was finished, her status changed to be released on bail, and she should go to the police station for the document process. But as soon as she arrived at the police station on February 21, 2021, she was detained. She was sent to the Changping Detention Center on February 22. She was formally arrested.

Ms. Zhang Xiuzhen was arrested by officers from the Gaoping Domestic Security Division on the afternoon of February 4, 2021. Police ransacked her home in the Teacher Apartments of Shunqing District No. 1 Middle School on February 6, 2021.

Mr. Zhong Huiqing was arrested at home by officers from the Huangpu Police Station at night on March 17, 2021. His home was ransacked.

Ms. Hu Hanjiao and another practitioner (name and gender unknown) were arrested by officers from the Fenshui Police Station for talking to people about the persecution of Falun Gong in Fenshui Town on the morning of March 15, 2021. They were reported to the Hanchuan Domestic Security Division. They were given physical exams in the Hanchuan People’s Hospital in the afternoon. They are placed in criminal detention.

Ms. Jin Guizhi, around 78, Ms. Cui Guixi, around 76, Ms. Li Zhenying, around 60, and others were arrested by officers from the Gaotang County Police Department and the Yuqiuhu Police Station on March 15, 2021. They are being held at either the Liaocheng City Detention Center or the Detention House.

Mr. Li Jian of Zhongshan University was arrested at home by officers from the Haizhu District Police Department and the Xingang Police Station on November 5, 2020, for distributing Falun Gong flyers on the campus. The officers ransacked his home and seized printers, computers, and other items.

Ms. Wang Liwen and Yuan Shufang (gender unknown) were arrested on March 3, 2021, for talking to people about the persecution of Falun Gong. They were taken to the Donglai Police Station. Officers ransacked Ms. Wang’s home in the afternoon and incarcerated her in the Zhangjiakou Detention Center for 10 days. Yuan Shufang was released within 24 hours after her physical exam showed she had high blood pressure.

Ms. Jiang Liyu is illegally incarcerated. Her parents, Mr. Jiang Qixiang and Ms. Qiao Liangyu, recently were harassed again by agents from the local government and officers from the local police station.

Mr. Jiang and Ms. Qiao were harassed at home on March 10, 2021, by Baoxia Town mayor Yu, government agents, officers, and deputy director He Xiulin from their employer, the Baoxia Town Center Hospital. They said Beijing was holding the two sessions (the year’s biggest legislative gathering) and they came to “take care” of Ms. Jiang’s parents. They held a photo of Ms. Jiang and asked the parents to confirm it was their daughter.

Ms. Jiang’s lawyer and parents have not seen her since she was arrested in 2017 because the Hankou Prison blocked their visits.

Ms. Wang Wenchuo, 40, was arrested at home on March 5, 2021. Twelve plainclothes officers ransacked the place with a search warrant and seized two computers, a printer, three cell phones, over 40 Falun Gong books, and other items.

Ms. Wang was taken to the Luquan Development Zone Police Station and interrogated. Officer Feng insisted on taking her to the Luquan Detention Center the next day, but guards refused to admit her because her blood pressure was 160. The officer took her back to the detention center the next day. The guards once again refused to take her because her blood pressure was 220. She was released.

Ms. Dong Yunqin was 60 years old. Her daughter-in-law and her grandson were illegally searched after they showed their identity cards to purchase high speed train tickets on February 18, 2021. Officers found two Falun Gong keepsakes and paper currency with Falun Gong messages worth dozens of yuan in their bags. They asked where they got them, and threatened to detain them if they did not answer.

Two days later, the officers phoned Ms. Dong’s son, and ordered him to have Ms. Dong report to the police station and sign papers. The son refused. The officers threatened that, not signing the papers would jeopardize her children and grandchildren’s education, their chance to join the army, their careers, etc.