(Minghui.org) Today's news from China includes incidents of persecution that took place in 15 cities or counties in 10 provinces, where at least 17 practitioners were recently persecuted for their belief. 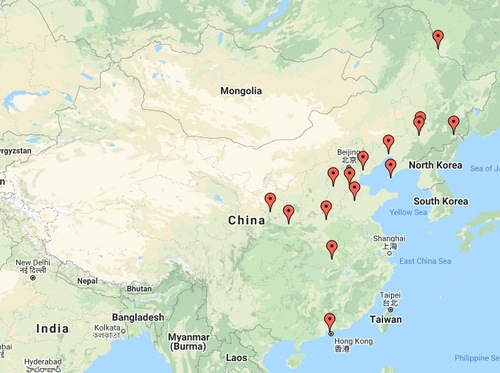 Ms. Hou Liling and her daughter from Jinan City, Shandong Province, were followed by officers from the Wenhui Police Station in Yangzhou City, Jiangsu Province, on April 23, 2020. Ms. Hou was talking to people about Falun Gong while traveling in Yangzhou City.

They were arrested by the officers while they ate in a restaurant in Zhenjiang City, Jiangsu Province, on April 25. They were taken to the Yangzhou City Detention Center.

On April 30, Ms. Hou’s daughter was released on bail and returned home due to a physical condition.

Ms. Hou was tried in the detention center in October, and her family members were not allowed to attend the hearing. She was sentenced to a one-year-and-five-month prison term. She was taken to the Nantong Women’s Prison in December.

Mr. Zhou Yonglin and his wife Ms. Sun Jiping were each sentenced to five years in prison and fined 10,000 yuan by the Linghai City Court.

Regardless of the facts and laws, and despite Ms. Sun Jiping’s critical physical condition, the Jinzhou City Intermediate Court upheld the original verdicts on March 26, 2021.

It was reported recently that Mr. Dong Weixing was sentenced to a one-year-and-six-month prison term. He is being held in the Yitong County Detention Center. His daughter, who was sick, was left unattended.

Ms. Cui Qunying is from Chaoyangchuan Town. Her bag was searched by security personnel when she was about to board the high-speed train at the Yanji West Station, and she was later arrested by State Security personnel. She went on a hunger strike after the arrest. She is currently detained in the Yanji City Field Squadron, Yanbian Brigade, Yanbian Railway Public Security Division.

Ms. Jiang Yanping from Bolin Town was arrested by officers from the Xiangyang Police Department on April 1, 2021. Someone called and harassed her several times prior to her arrest.

Huang Honglei (gender unknown) was arrested on March 31, 2021. Huang is being held in the Laoting County Detention Center.

Ms. Ma Xiujuan from Shijiazhuang City, Hebei Province, was arrested in December 2019 by officers from the Yuanping City Police Department in Shanxi Province across provincial borders. She was released on bail after being held in the Xinzhou Detention Center for 37 days.

A year later, Ms. Ma was summoned several times by the procuratorate. She recently hired a lawyer. On April 6, 2021, the lawyer will go to the Xinfu District Procuratorate of Xinzhou City and request the procuratorate to withdraw the case.

Ms. Sha Zhaodi from Qingshan District was arrested by officers from the Xingouqiao Police Station on March 29, 2021. Her current whereabouts are unknown.

Mr. Liu Yonghong, an employee of the Zhenghe Middle School in Zhuanglang County, had a conversation in the Nancheng Community of Zhuanglang County with Zhu Yonggang, deputy secretary of the City Political and Legal Affairs Committee, and three others on the afternoon of April 1, 2021. She was accompanied by school principal Wen Xufeng and others from the school.

Zhu said that at the end of June, Gansu Province would implement the “zero-out” policy, and employees who persisted in practicing Falun Gong and refused to be “transformed” would be expelled from their jobs and taken to the provincial legal training class for “transformation.” When Liu Jinping, secretary of the Disciplinary Inspection Committee of the Education Bureau, pressured Mr. Liu to write the “four statements” (similar to the “three statements”), he sternly refused.

Ms. Dong Huizhen was arrested at home on February 14, 2020, by six or seven officers from the Huanghai Road Police Station in the Development Zone. The officers confiscated Falun Dafa books and related items. Ms. Dong returned home at about 2 p.m. that day. Afterwards, she was told she would live under surveillance for six months. Six months later, her case was turned over to the procuratorate and court.

Ms. Dong was taken to the Dalian City Detention Center on March 10. The detention center refused to accept her. In the end, the court granted bail, pending trial, with residential surveillance for six months.

Ms. Dong was tried on March 23. She spoke in her own defense during the trial. At the end of the trial, she was told to sign paperwork, which she refused to do. After that she felt weak and slumped into a chair. The court officials called in her husband and let him take Ms. Dong home.

Ms. Lei Xiaoli from the Taiheju Residential Community, Xinjiamiao Sub-district, was arrested by officers from the Lianhuachi Police Station on March 25, 2021. She was taken to the Lianhu District Detention Center the following day.

According to people who know Ms. Lei, she is almost blind and needs help from her family in her daily life. At the police station, in order to frame her, the officers knew that she could not read the document they presented her with. They asked her family to read the prepared document to her. The officers then pressured her to admit that she was guilty and sign the paperwork.

Six or seven people from the Sunwu County Political and Legal Affairs Committee, the 610 Office, and the local community went to Ms. Duan Guirong’s home on April 1, 2021. They ordered Ms. Duan and her husband to sign paperwork and tried to take photos of them together, which Ms. Duan refused. They said that they had to photograph the couple and the couple had to sign paperwork. They threatened that if the couple didn’t sign, they would harass the couple’s child at their child's workplace.

Mr. Wang Shuiyong from Lutun Village, Xixindian Township, was harassed and persecuted by members of the township government on September 10, 2020. He passed away on October 2.

When his daughter sought justice from Chen Liqiang, a township government official, for her father’s tragic death, Chen retaliated against her. She was targeted as a key person to be placed under surveillance and intercepted. Chen called the police departments in Beijing where Mr. Wang’s daughter was living. He told them to install surveillance cameras around her home on the grounds that as a family member of Falun Gong practitioners, she made trouble by visiting and appealing to local government agencies in Hebei Province.

But so far, Mr. Wang’s family has not received Chen’s reply, and Chen has not answered their phone calls.