Chicago: Rally in Front of Chinese Consulate Calls for CCP To End Brutality in China “Our Society Needs Falun Dafa”

(Minghui.org) Falun Dafa practitioners in Illinois gathered in front of the Chinese Consulate in Chicago on April 24, to commemorate a peaceful appeal 22 years ago. They also told passersby about the Chinese Communist Party’s (CCP) decades-long brutal persecution.

On April 25, 1999, over 10,000 Falun Dafa practitioners went to the State Council Appeals Office in Beijing requesting the release of illegally arrested practitioners in Tianjin. The then premier met practitioner representatives and released the detained practitioners. Practitioners gathered near Zhongnanhai cleaned the area and left quietly afterwards.

This event was widely praised by Western media outlets including the BBC, Associated Press, and the New York Times. According to their reports, this was the largest and most peaceful appeal since the Tiananmen Square Massacre in 1989. 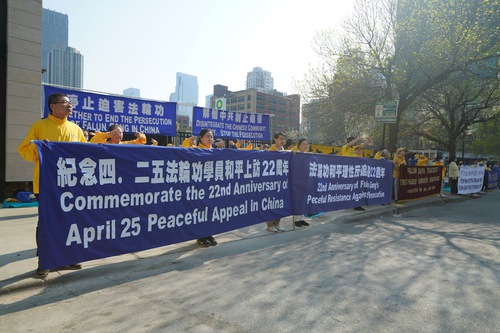 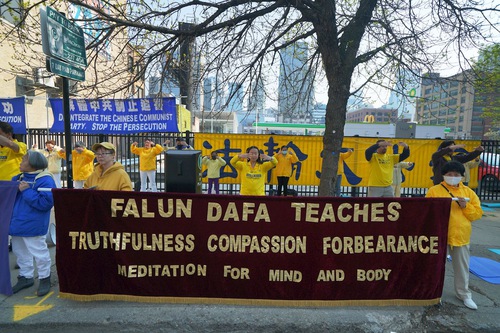 Practitioners display banners near the Chinese Consulate in Chicago on April 24, 2021. 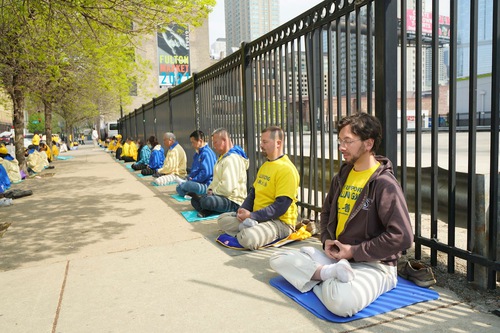 Ms. Zhou Li, a practitioner from Dalian City, Liaoning Province, who participated in the April 25 Appeal, said that the atmosphere was very peaceful and rational. Practitioners did not speak loudly, nor did they block traffic. “We did not ‘besiege’ Zhongnanhai as the CCP propaganda claimed,” she explained, “We just exercised our lawful rights to appeal to release practitioners who had been illegally arrested. The Appeals Center was across the street from Zhongnanhai.” 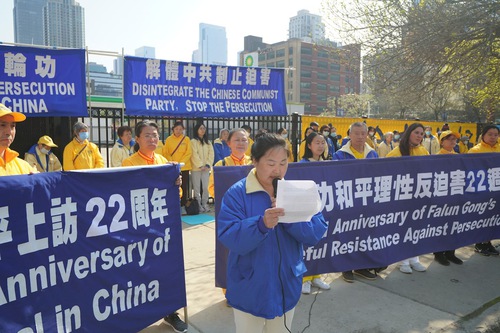 Ms. Zhou Li recalled her participation in the 1999 peaceful appeal in Beijing.

Because the appeal was resolved by the premier, Ms. Zhou thought the government knew Falun Dafa well. She and her husband, as well as other practitioners, also visited their local appeals offices to tell them the facts. However, a brutal suppression soon followed. Within weeks, on July 20, 1999, CCP leader Jiang Zemin announced a nation-wide arrest of practitioners. Both she and her husband were arrested.

Ms. Cheng Wanying, a resident in Beijing at the time, joined the appeal with other practitioners. When she arrived at Fuyou Street, where the Appeals Office was located, practitioners lined the sidewalk. Some were standing silently while others were doing the exercises. Police officers were nervous in the beginning. Seeing no banners, no slogans, not even loud talking, they relaxed and began to chat among themselves or smoke.

Most people in China at the time knew about Falun Dafa. Seeing the large-scale, peaceful appeal, many people were surprised. “One young man riding a bike stopped and chatted with us. He said it was hard to find a peaceful group like us,” Ms. Cheng explained, “One of my relatives wanted to practice it too. Even police officers were moved when seeing practitioners very quiet and then cleaning the site before leaving.”

When he launched the persecution against Falun Dafa in July 1999, Jiang claimed that he would eradicate the spiritual practice within three months. Rooted in humanity's traditional values of goodness, however, Falun Dafa not only withstood the harsh mistreatment but also attracted more followers over the years. 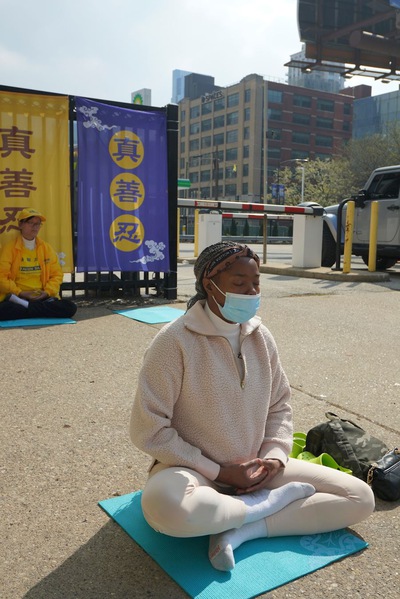 Molly Brinson, a medical professional living in Chicago for nearly 30 years, saw a video about Falun Dafa in March. “What surprised me was that the practice not only improves one’s health but also helps us to be better people,” she recalled. As a result, she visited Chicago Chinatown to learn the exercises a few weeks ago.

After reading what practitioners suffered in China for their belief, Brinson said that her heart was almost broken. “Their perseverance shows the values of Truthfulness-Compassion-Forbearance, the principles practitioners embrace,” she added. She said that is also why she feels that Falun Dafa is what she’s been looking for her whole life. “There have been ups and downs in our lives, but all these have guided us to be better people – something you can find in Falun Dafa,” she explained.

Practitioners displayed banners with the messages, “Falun Dafa is good” and “Stop persecuting Falun Gong.” They also distributed flyers to passersby. Many people stopped for more information, and some drivers in passing vehicles honked their horns to show their support.

JD Johns, a Chicago resident, said he liked photography and he took many photos of the practitioners' activity to share with friends. He said that what practitioners are doing is consistent with the American spirit – the pursuit of freedom and liberty. Coming from a conservative family, he believes everyone should have the freedom of faith. He thanked practitioners for their efforts and said that he supports their cause. 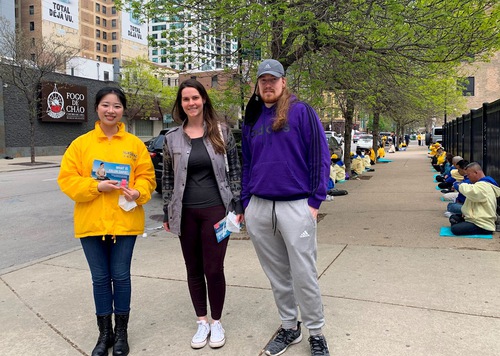 This was the first time that Matt and Michelle Kamer heard about Falun Dafa. Matt said he liked to meditate, but it was hard for him to imagine how practitioners could remain calm in downtown Chicago. “It’s really amazing!” he said.

Both Ryan Lehman and Kim Berryman signed petitions urging an end to the persecution in China. “The suppression is really terrible and we all hope it will stop soon,” said Ryan.

Mauricio Ramirez works at a nearby restaurant. “In past eight years, I have seen how these practitioners have opposed the brutality in China through their peaceful and persistent efforts,” he said, “Our society needs people like them.”