(Minghui.org) Today's news from China includes incidents of persecution that took place in 15 cities or counties in 7 provinces, where at least 24 practitioners were recently persecuted for their belief. 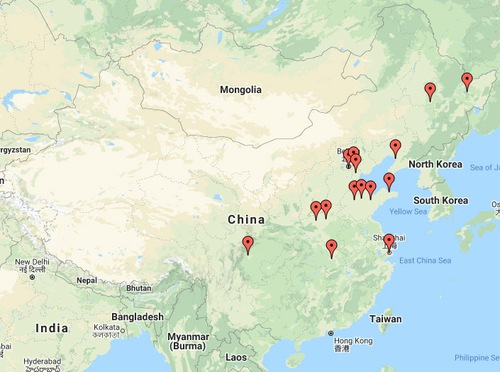 About 30 people from the detention center came there that day. Plainclothes Domestic Security officers were deployed on roads near the funeral home to keep an eye on people associated with Mr. Guo. Deputy director Cai Guojin (badge number 105123) was also there.

Liu Yong, head of the discipline team of the detention center, showed the “Autopsy Notice” to Mr. Guo’s family.

Mr. Guo’s son wrote on the notice, “I disagree with the conclusions of this autopsy. I request the prosecution to intervene in the investigation and specifically designate an autopsy agency.”

Deputy head Xu Zhenwang, of the detention center, was very angry when he read what Mr. Guo's son wrote and said, “If you insist on it, we will conduct an autopsy, but your family will be held responsible for bringing up this issue, and all the consequences.”

The family members replied, “What you say amounts to threatening us. We are family members of the deceased, we are not detainees in your detention center.” Mr. Guo's family then went to the Zhengzhou City Procuratorate.

Prosecutor Huang from the Zhengzhou City Procuratorate, who was stationed in the Supervision Office of the Zhengzhou No. 3 Detention Center, met with Mr. Guo’s family. The family asked the prosecutor why the detention center did not allow them to see his body.

Prosecutor Huang said, “We just cannot let you see his body, because he was sentenced, and yet not been taken to prison. Because of the pandemic, the prison does not admit people and he had not started serving his prison term. (Due to these technicalities) you cannot ask to see his body.”

Based on practices in China’s legal system, conducting an autopsy is done for two reasons. One is to reach a conclusion on the “cause of death.” Even though Mr. Guo’s family refused to sign the autopsy notice, the officials might issue an autopsy report in order to attribute the cause of death to Mr. Guo himself. This way they completely absolve themselves of all responsibility. Second, regardless of whether the family signs the autopsy report, after the autopsy, the body is immediately cremated because the cause of death would have been stated on the report.

From the way the officials handled the situation, Mr. Guo's family feels that the crimes committed by the public security departments, the Domestic Security officers, heads of the detention center, and detention center guards, who were in charge of his case, resulted in his death while he was in custody.

Ms. Wu Feng from Shuangcheng District was arrested in 2019 and her whereabouts were unknown. It was reported that she is being held in the Hulan Prison and her term will end in October 2021.

Ten officers from the Beicheng Police Station went to Ms. Meng Qingyun’s home at 8:00 p.m. on March 23, 2021. They forced her family to appear on videotape with Ms. Meng to assert that they would not practice Falun Gong. Ms. Meng refused to cooperate. The officers were arrogant and rude, and the confrontation lasted for over half an hour.

More than ten officers from the police station went to Ms. Guo Chunying’s home in mid-March. She did not open the door. The officers talked to her through the door for a long time.

In late March, two officers from the police station went to Ms. Feng Shali’s home and harassed her in the Hydropower Fifth Bureau Residential Community under the pretext of examining her household registration. Two police officers each went to the homes of Ms. Zhen Jinxiu, Mr. Guo Song (a teacher), and teacher Liu (gender unknown) to harass them.

Ms. Zhao Guozhen, 79, from the Hongjialou Sub-district, Licheng District, was recorded on video surveillance cameras at a social activity center when she was distributing Falun Gong materials on the afternoon of December 2, 2020. Officer Zhang Xiaoguang from the Hongjialou Police Station, along with officers from the 610 Office and the Domestic Security Division, went to her home and ransacked the place the following morning. They confiscated Falun Dafa books. They processed her release on bail and fined her 1,000 yuan.

After March 27, 2021, the police officer who handled her case came to her home three times, interviewed her, collected evidence, and asked her to sign paperwork. She has received the “Notice of Transfer for Prosecution,” and her case has been filed at the Procuratorate.

Officers from the Banyang Road Police Station and personnel from communities in Zichuan District went to local practitioners’ homes and pressured them to sign guarantee statements on the morning of March 30, 2021.

Officers from the Political Security Section of the Luolong Police Department broke into Ms. Wu Yongfeng’s home on March 30, 2021. Ms. Wu and her husband were arrested, and their two young daughters were left at home by themselves. Her husband was released on bail at around 11:00 p.m. that night. Ms. Wu was held in the Luoyang City Detention Center, where she was severely abused.

Ms. Liang Yaomin, in her 60s, was held in the Fushan Detention Center. She was in very poor health.

Ms. Liang has developed a serious heart problem, and her legs shake badly. Sometimes one leg trembles and she can only use the other leg to suppress it. If she fails to suppress the shaking leg, she suffers severe chest pain.

Despite her condition, the Haiyang Police Department and Domestic Security Division continue to refuse her request for release on bail.

Ms. Zhang Yuxia, 56, from the Honghai New Area, Bayuquan District, was arrested by officers from the Wafangdian Police Department and the Honghai Police Station on April 1, 2021.

Ms. Zhang was diagnosed with severe diabetes during a physical examination at the Wafangdian Hospital. The Yaojia Detention Center refused to accept her.

When Ms. Zhang’s non-practitioner son heard that his mother had been arrested he rushed back from southern China, went to the police department, and demanded that she be released. He brought her home on the evening of April 2.

Ms. Zhang Wei, an associate professor from Wuhan University of Technology with a Ph.D. degree, was arrested by personnel from the Zhuodaoquan Sub-district Administration Office on April 4, 2021. She was taken to the Qingling Brainwashing Center in Hongshan District.

Ms. Zhao Qiuying was arrested and her home was ransacked by officers from the Nankai Police Station on March 9, 2021, for talking to people about Falun Gong. She was taken to the Tianjin Detention Center.

Ms. Wang Zhen was arrested by officers from the Nanguan Police Station on the morning of April 5, 2021, when she was distributing Falun Gong materials and talking to people about the spiritual practice. The officers ransacked her home that day and confiscated Falun Dafa books and printed materials.

Ms. Chen Ping from the Xuhui District was followed when she went out on April 6, 2021, by people who were waiting outside her home.

She was arrested at home on April 6, 2021 by the officers. It is not clear where she is being held.

Ms. Meng Lichun has been held in custody for a year and a half since her arrest in September 2019.

The principal and director of Beicheng Primary School harassed Ms. Lei Zhifeng and pressured her to sign three statements, but she refused. They harassed her family again on March 31, 2021, saying that she would be fired if she did not sign.