(Minghui.org) Today's news from China includes incidents of persecution that took place in 17 cities or counties in 11 provinces, where at least 57 practitioners were recently persecuted for their belief. 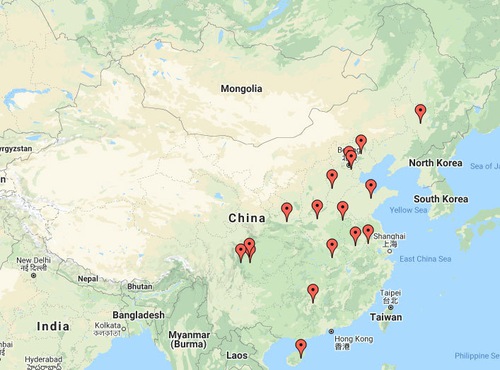 Mr. Liu Ganyong of Yichuan County was wrongly convicted and sentenced to one year in prison in February 2021. He was first held in the Wei County Detention Center. He is now incarcerated in Xinmi Prison.

Ms. Fu Suqin talked to an elderly person about the persecution of Falun Gong in the Mentougou Bus Station on July 14, 2020. The person reported Ms. Fu to the police. She was arrested by officers from the Sanjiadian Police Station. She was released on bail after a detention center refused to admit her because of her high blood pressure.

Her case was submitted to the Mentougou Procuratorate on March 5, 2021. She was questioned at home by officers from the procuratorate. The officers asked about the source of her Falun Gong flyers and if she still practiced.

Ms. Cui Xiuling from the Tongzhou District was arrested by local police in mid-March 2021. Her detention location is unknown.

The Changchun City Political and Legal Affairs Committee has harassed practitioners since the “zero-out” campaign began in 2020. The committee forced the Kuancheng District Education Bureau to hold two brainwashing sessions in its teacher training school since March 2021. Fu (first name and gender unknown) was held there for brainwashing. They threatened Fu’s job and tried to force Fu to renounce Falun Gong.

Since 2020, the Education Bureau director Qi Ruichen worked with the Human Resources and Social Affairs Bureau, illegally held 27,000 yuan of Fu’s salary, and blocked Fu from teaching students. Teacher Fu had to report to the training school daily. They assigned a person to monitor Fu.

Ms. Yang Junqing has been repeatedly harassed by officers from the local police station since 2021. The officers tried to force her to renounce Falun Gong. She refused.

On the afternoon of April 7, 2021, she was suddenly surrounded by six people right after she finished her grocery shopping and stepped out of the store. They ordered her to renounce her faith and help “transform” other practitioners in the government’s campaign to “zero out” Falun Gong practitioners. She refused. They threatened her and said they would harass her son and granddaughter, disrupt their careers and education, and hold her for 15 days in a “study” (brainwashing) session in Meishan City.

Mr. Peng Guangfu was arrested on September 17, 2020, and has since been detained. His case was submitted to the procuratorate.

Ms. Guo (first name unknown), 76, was arrested at home by officer Wang and others from the Lianhua Police Station on April 7, 2021. The officers ransacked her home and seized her computer, printer, Falun Gong books, a picture of the founder of Falun Gong, Falun Gong printouts, a radio, and other items. They took her to the Economic Development Zone Police Station and questioned her about the source of her Falun Gong materials. She was released on bail that night.

Mr. Chu Qinghua was arrested by officers from the Taibaozhuang Police Station when he was selling buns on April 7, 2021. He was taken to the police station, interrogated, and forced to sign on a police record.

Ms. Li Baozhu fled from home to avoid being persecuted in August 2020. An officer unintentionally mentioned she was arrested and held at a detention center in another town.

Ms. Ma Zefen was harassed at home by two officers from the Jinqiao Police Station on April 7, 2021. The officers questioned her if she still practiced Falun Gong.

Ms. Ning Guifen of Longhua County was arrested at home on April 6, 2021. Officers took her to the Longhua County Police Station, made an audio recording, gave her a physical exam and nucleic acid test, and collected biometric data. Her home was ransacked. Her Falun Gong books, picture of the founder of Falun Gong, Falun Gong exercise music player, and other items were confiscated. She was taken to a detention center but was released because she did not meet the physical requirements for detention.

Ms. Huang Xiuzhi was arrested by officers from the Pingyuan Police Station in early March 2021. She has since been detained.

Mr. Wang Tianliang of Yanshi City was arrested on March 4, 2021. He is being held in the Yanshi City Detention Center.

The family of Ms. Huang Hongwei received a notification of arrest of Ms. Huang from the Jianghan District Procuratorate on April 3, 2021.

Ms. Sha Sha was arrested in front of her condominium building by more than ten officers on March 30, 2021. Her whereabouts are unknown.

Ms. Zheng Yunfeng posted Falun Gong flyers at the end of January 2021 and was recorded by a surveillance system. The county Domestic Security Division directed officer Deng Nan and others from the Wenmiao Police Station to arrest her. She was handcuffed behind her back the entire night and taken to the Yongzhou Women’s Detention Center the next day.

She was released on bail in March 2021 because she had severe anemia. Her hemoglobin was 6 g/dl. Domestic Security Division head Jiang Gang submitted her case the to the county procuratorate.

Mr. Hu Mingyou was taken to the Qindu District Detention Center on March 26, 2021. But guards refused to admit him because of his high blood pressure. He was released at 10:00 p.m. The situation of Qiang (first name and gender unknown) is unknown.

Ms. Zhao Guirong was arrested and taken to the Caihong Police Department on the afternoon of March 26, 2021.