(Minghui.org) Falun Dafa practitioners from Changhua County gathered at the Lukang Culture Center in Changhua City to demonstrate the exercises, tell people about Falun Dafa, how it's persecuted and to collect signatures to condemn the persecution. 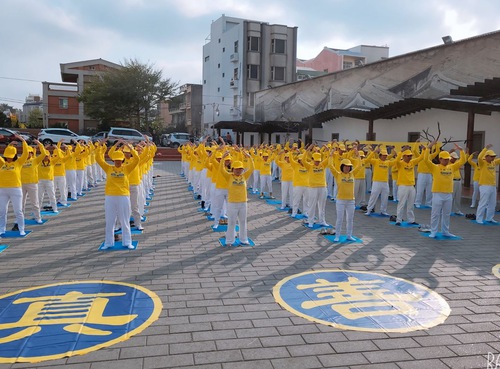 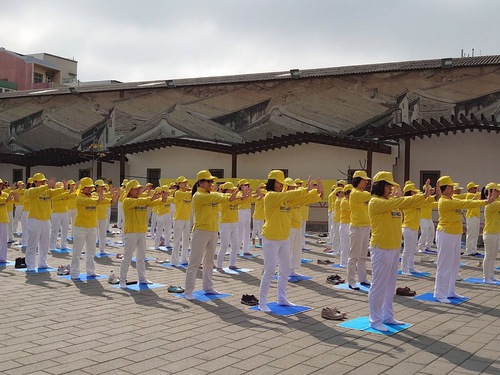 There are several historic and cultural attractions in Lukang Township, so it's a popular tourist destination. The synchronized movements and peaceful atmosphere as practitioners did the exercises prompted many passersby to stop to watch, take video, take information materials, or ask questions about Falun Gong. Some stayed to learn the exercises. 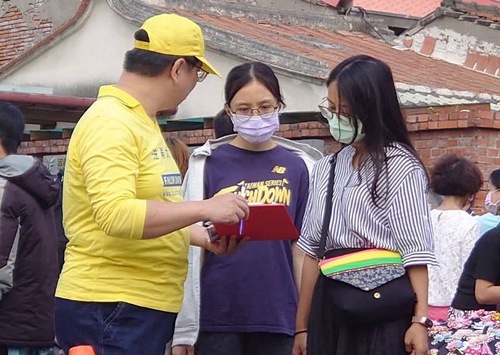 Practitioners distribute flyers and collect signatures on a petition to condemn the persecution.

Mr. Zhang, a practitioner in charge of collecting signatures, told local residents why signing the petition is meaningful. He said, “Your righteous action will help stop the Chinese Communist Party’s (CCP) ongoing persecution of Falun Dafa practitioners in China.” As soon as he heard this, Mr. Hall, a westerner, signed the petition and said he supported practitioners in exposing the crimes committed by the former CCP head Jiang Zemin, the police and courts in China. Mr. Hall’s wife and friends also signed the petition when they learned what is happening.

When practitioner Ms. Yaxin was collecting signatures, an elderly man told her, “I know Falun Dafa and I support it. Keep up the good work!” He signed the petition and encouraged the people around him to sign the petition to stop CCP’s persecution of Falun Dafa.

After talking with a practitioner and learning the urgency of ending the persecution, Mr. Song called his wife and children and told them about Falun Dafa and had them sign the petition, too.