(Minghui.org) Falun Dafa practitioners held activities in front of the Chinese Embassy in Brussels on April 21, 2021 to peacefully protest the CCP's (Chinese Communist Party) ongoing persecution and to commemorate the April 25 Appeal.

Practitioners protested the persecution and commemorated the April 25 Appeal in front of Chinese Embassy in Brussels on April 21, 2021.

Although foot traffic in the Embassy district was light, many passing drivers honked their horns or gave practitioners a thumbs up to express their support. 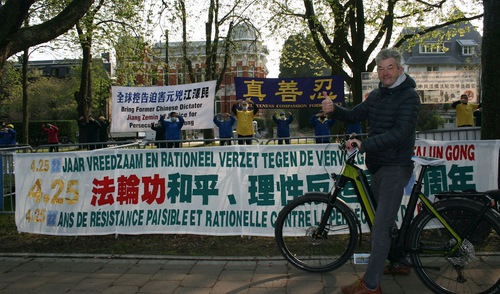 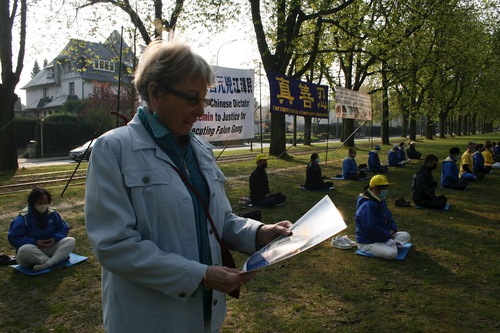 Mrs. Martens, a local resident, knew about the persecution. She and her husband support practitioners' efforts. 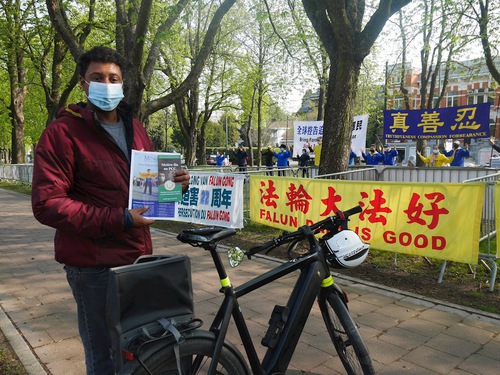 Mr. Ab Dimbeko goes by the Chinese Embassy every workday and has seen practitioners' peaceful protests before. He said he could relate the CCP's brutality to that of the communist party of the former Soviet Union. “I knew the CCP persecuted people in Hong Kong, Tibet, Xinjiang and Falun Dafa practitioners. But why?! A government is supposed to take care of its people. It is unimaginable that people can’t live a peaceful life and exercise like you do. I am against all kinds of persecution,” he said. 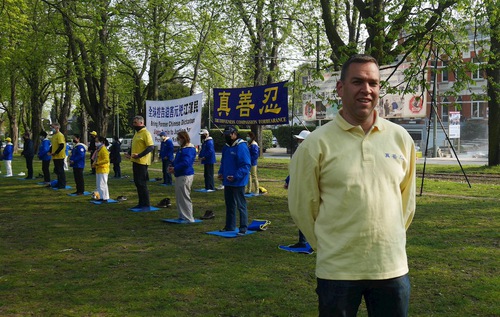 When the persecution started in July 1999, Hoeven and other practitioners outside China didn’t know what to do when thousands of practitioners in China were arrested and the CCP used all media to slander Falun Dafa. “We thought we must do something. So we made banners, printed fliers, and began protesting at the Chinese Embassy and Consulates.”

Hoeven and other Western practitioners traveled to Beijing in 2002 to tell Chinese people Falun Dafa is good. They hung banners printed with Chinese characters “Falun Dafa is good” on overpasses and sent forth righteous thoughts on Tiananmen Square. The Chinese Embassy refused to grant him a visa since then.

“We won’t stop until the persecution is ended,” he said. 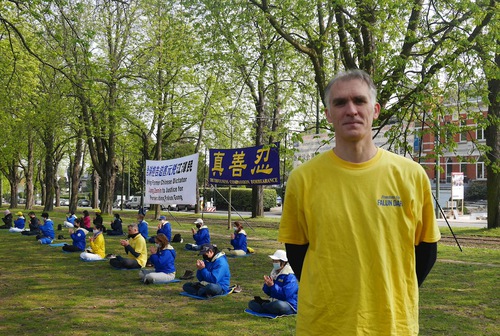 Event organizer, practitioner Nico Bijnens said the protest was a continuation of the peaceful appeal 22 years ago. “This activity is important. We organized the event by following the local orders to curb the spread of the ‘Chinese communist party virus’,” said Bijnens.

He believes the systematic persecution of Falun Dafa is suppressing the core values, Truthfulness-Compassion-Forbearance, so the persecution has a devastating effect on Chinese society.

When the coronavirus first appeared in the city of Wuhan, the CCP suppressed the truth again, resulting in a disaster for China and the rest of the world.

He added, “Our protest is peaceful and orderly. We do not scream or shout. We wish to express our message in a peaceful way, the same as those practitioners who appealed on April 25, 1999.

“People are looking for a way to regain peace in their hearts when they must stay at home and are isolated during the pandemic. Every Falun Dafa practitioner has a unique story of how they benefited from the practice. We will be happy to teach anyone who wants to learn Falun Dafa and the instruction is always free.”