(Minghui.org) Today's news from China includes incidents of persecution that took place in 19 cities or counties in 9 provinces, where at least 43 practitioners were recently persecuted for their belief. 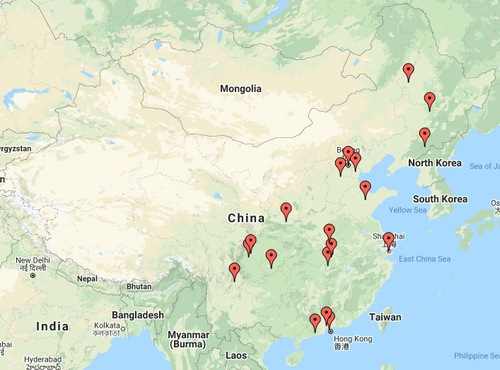 Chibi City police officers went to Ms. Chen Wangqiu’s home and attempted to arrest her on March 29, 2021. Ms. Chen had been persecuted for her faith many times. When she saw the officers, she did not open the door. The officers did not leave and blocked her door. Even at night, the officers were staked out downstairs, waiting to arrest her.

According to insiders, in the early morning of March 30, to avoid arrest, Ms. Chen tried to use a rope made from bed sheets to escape from her fourth floor apartment. The rope broke, and Ms. Chen fell to her death.

Ms. Ning Hong, who suffered from high blood pressure, hyperlipidemia and hyperglycemia, was tried at home by the Pengzhou City Court on March 26, 2021. She was sentenced to three years in prison and fined 5,000 yuan.

Ms. Ning was reported to the police for talking to people about Falun Gong in August 2019. The police station filed a case against her to the city’s police, procuratorate, court, and judicial organizations.

Ms. Ning was told that that the period from September 23, 2019, to March 26, 2021, was deemed residential surveillance by the Pengzhou City Police Department.

Ms. Huang Zhenglan lives in the Changshou District. Her case was brought to the Jiangbei District Court. She is scheduled to be tried in mid-April 2021. The procuratorate recommended a three-year sentence, or two years and eight months if she paid a 2,000-yuan fine.

Ms. Huang has been detained, sentenced to prison and forced labor several times, and twice taken to the Yanjia Psychiatric Hospital. On January 20, 2020, her four-year prison term ended and she returned home from the Chongqing Women’s Prison. In prison, she endured various forms of inhuman torture.

After returning home, Ms. Huang took a job cleaning toilets. Her monthly salary was only 900 yuan, which was far below the minimum wage set by the government. Officials from the Bake Town Government and the Changshou District 610 Office went to her home to harass her on various occasions and paid her neighbors to monitor her closely.

Ms. Huang was reported to the police for talking to people about Falun Gong on December 14, 2020. Officers from the Bake Town Police Station ransacked her home.

On March 17 and 18, 2021, Li Songlin, security director of Kalu Village, Chengfa Township, was instructed by his superiors to harass and threaten practitioners Bi Jianhua, Mu Guirong, Li Yufeng, Ji Yufeng, and Han Ruifeng, and their families in Chengfa Township. Li applied pressure on their family members.

Li forced Mr. Hao Zhanguo to “transform” (renounce his faith), sign paperwork, and scold the founder of Falun Gong. Li videotaped him and had other practitioners watch it.

Li shouted, “If you do not 'transform, you will be arrested and sentenced to at least five years in prison.”

The Yushu City Political and Legal Affairs Committee sent a person to Chengfa Township to “transform” practitioners there. For each practitioner transformed, this person would receive a bonus of 30,000 yuan.

More than twelve people, including members of the Enping City 610 Office, arrested Mr. Xu Chunyang on August 7, 2020. They ransacked his home and confiscated Falun Dafa books, a computer, a printer, and a DVD player.

In late March 2021, the day of Mr. Xu’s father’s birthday, seven or eight people from the 610 Office, police station, and local management office went to Mr. Xu’s home, where his family was preparing to celebrate his birthday. Mr. Xu was not at home at the time, and they immediately went to his company to harass and threaten him.

Recently, members of the 610 office threatened Mr. Xu’s boss and company shareholders. His boss was pressured and felt helpless. Mr. Xu is an executive and a key player driving the company’s business.

Two women from the Jianhe Community and a residential officer knocked on the door of Ms. Liu Fengrong’s home in January 2021. They asked for her daughter’s phone number and said they would look for her daughter. Later, they found Ms. Liu’s daughter at her workplace and told her, “If your mother continues to practice Falun Gong, she will be taken to a brainwashing class and you will be fired. Your mother is very old. We won't bother to look for her, we will come after you instead.” They also photographed Ms. Liu’s daughter, who was quite upset.

Two members from the 610 Office and three people from the Jianhe Community knocked on the door of Ms. Shi Guifang’s home on March 30. They entered and asked her, “Do you still practice Falun Gong?” They also threatened, “If you continue to practice, it will adversely impact your family’s work and life.” Ms. Shi refused to sign any paperwork.

Two members from the 610 Office and three women from the Jianhe Community knocked on the door of Ms. Zhang Lirong’s home on the morning of March 30. Two people entered her home. One of them said, “Practicing Falun Gong will have an adverse effect on your wages and labor insurance payments, as well as your child’s future.”

Personnel from the Jianhe Community called and harassed Mr. Jiang Zhongjun and his wife, as well as Ms. Song Dianhong and her husband.

Staff from the Qingzhen Community, Erdaojiang District, called and harassed Ms. Lu Hong on the afternoon of March 29 and told her to go to the office to sign “five statements” renouncing Falun Gong. Ms. Lu refused.

Ms. Zhang Jie and her husband Mr. Xing Guoqing received a call from the residential committee on the morning of March 2, 2021, saying that people from the committee would visit the couple at home. After the couple's door was opened, police officers barged in and ransacked the place. They confiscated a computer, a printer, among other personal belongings.

The officers arrested the couple and two other practitioners who came to study the Falun Gong teachings. The practitioners are being held in the Fengtai District Detention Center.

In the Nanshan District Detention Center, Ms. Xue Aimei insisted on practicing Falun Gong and refused to be transformed. At 2:30 p.m. on March 19, 2021, the guards called her out of the cell. They pushed her to the ground without giving her any reason. They put her in handcuffs and shackles and did not remove the shackles until the afternoon of March 23. During this period, her hands and feet bcame red, swollen, and bruised. She endured severe pain.

Ms. Wang Aiqun, in her 50s, has been arrested, held in forced labor camps, and detained many times. Her life has been disrupted for a long time.

She was arrested again at home on March 14, 2021. No one has heard from her for over 20 days, and her family is anxiously waiting for her return.

Director Chen of the Chengnan Police Station in Baodi District and four people from the Baodi Sub-district Administration Office and Hejing Residential Committee went to the home of Ms. Gao Hui’s father on the evening of April 2, 2021. They pressured Ms. Gao to sign paperwork, and they harassed her until 1 a.m. that night before leaving. According to these people, this was the second round of their signature campaign, which would last until May 1.

On the afternoon of April 2, Ms. Jin Changmei could not contact her father Mr. Jin. She went to his home to see what happened and was also arrested. Ms. Zhou, Mr. Jin, and Chen were released due to high blood pressure.

Officer Zhang Weiping, from the Hudong New Village Police Station, and the security director of the Chuanbo New Village in Hudong Sub-district, Pudong New Area, knocked on the door of 66-year-old Ms. Xu Jiayu’s home around 10 a.m. on April 2, 2021. Officer Zhang insisted on entering the room to take a look, but was refused. Zhang asked her who her internet service provider was and what her phone number was, which she refused to tell him.

On the afternoon of March 31, 2021, five people from the Linqu County 610 Office and the Liushan Town Police Station went to Mr. Zhang Ruizhen’s home to harass him with the excuse of having a talk. Mr. Zhang’s wife stopped them, saying that Mr. Zhang was not at home, and she refused to let them in.

Mr. Liu Fenglin, 56, and his wife Ms. Liu Sujuan, 59, from Liujiazhuang Village, Jiangcheng Township, went to Shunping County on a motorcycle to distribute Falun Gong materials on March 21, 2021. They were arrested and taken to the Shunping County Detention Center by officers from the Pushang Town Police Station.

On March 26, Ms. Liu suddenly developed high blood pressure. On the way home, she asked to go home by herself. After getting out of the police car, she took a taxi and went home safely. Mr. Liu was detained for 15 days.

Mr. Liu’s family accompanied his 90-year-old mother to the detention center and the police station to demand Mr. Liu’s release. The officers deceived the elderly woman that they would release her son the next day. Fifteen days have passed, but they still have not released Mr. Liu.

Four officers including Li Chuanqiang from the Jinlun Police Station went to Ms. Luo Meng’s Shuntianyi Hair Salon on the morning of March 31, 2021. They took pictures and videos of the salon and ripped off a “Blessed Babies” picture with Falun Gong content posted on the wall.

Qin Ming, secretary of the Party Committee and secretary of the Political and Legal Affairs Committee of Lizhou Town, and three other people went to Ms. Luo Hongmin’s home on the afternoon of March 23, 2021. They pressured her to sign paperwork, saying that if she did, they would wipe out the files that marked her Falun Gong affiliation. She refused.

Recently, Xichang City has also launched a “zero-out” campaign to harass Falun Gong practitioners and ask them to sign paperwork. Mr. Zhang Yuwen and Ms. Tang Zhongxiu from the No. 410 Factory family quarters were harassed by people from the Changning Community Management Office and the local police station.

Ms. Zeng Shaoyuan from family quarters of the No. 281 Division of the Ministry of Nuclear Industry was also harassed. She was not at home, and her husband was frightened.

Someone was staked out outside Ms. Chen Ping’s home in Xuhui District on April 4, 2021. Ms. Chen was also being followed.

Deputy chief Zhang of the Caihong Police Department led more than 12 officers to arrest 10 Falun Gong practitioners who were studying the Falun Gong teachings together. The officers ransacked the practitioners’ homes, confiscated over 20 Falun Dafa books, a computer, and a large amount of printed materials. Eight practitioners were released around 10 p.m. that night.

Mr. Hu Mingyou was taken to the Qindu District Detention Center on March 26. The detention center refused to accept him due to high blood pressure. He returned home at 10 p.m. that night.

Ms. Zhao Guirong was taken to the police department on the afternoon of March 26.

Fan Wenquan (gender unknown) was arrested in Xinxibian Village in the Niushan area on May 19, 2020, for calling people and talking to them about Falun Gong. Fan was held in the Dongguan Detention Center. Fan was sentenced to a three-year-and-six-month prison term on June 11, 2020, and taken to the Sihui Prison on December 17.