(Minghui.org) Today's news from China includes incidents of persecution that took place in 25 cities or counties in 13 provinces, where at least 70 practitioners were recently persecuted for their belief. 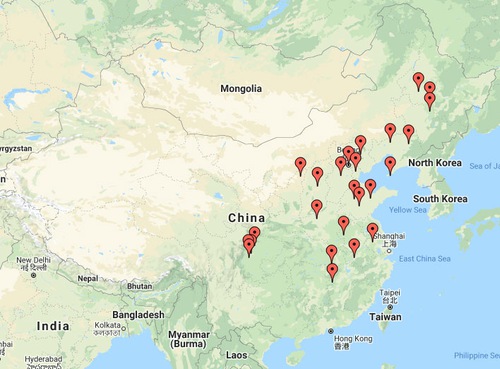 Five practitioners were arrested at around 9 a.m. on March 23, 2021 when they were shopping in the Zhufang Road Market. The practitioners included Liu Dequn, Ms. Ye, Ms. Li Hong, elderly Ms. Tang, and Xu Minggui. They have been detained in a private building in the Dingmao Development District since then. The youngest practitioner is 65 years old and the oldest is over 80.

Ms. Jin Huijuan from Guxian Village was arrested at home by officers from the Shifo Police Station. Her youngest son was also on the wanted list, and the police went to her hometown twice to look for her son but did not find him. Ms. Jin was forcibly taken to the Chinese Medicine Hospital for a physical exam. She was seen leaving the hospital in a wheelchair. Ms. Jin is now detained in the Anguo City Detention Center.

Mr. He Guoao from Tongcheng County was arrested by twelve people from the Tangcheng Police Department and the local community office on April 6, 2021.

Ms. Yu Xianrong, 81, was harassed at home by seven plainclothes officers at around 3 p.m. on April 1, 2021. Six officers were from Jianzhuxincun Police Station and one was from Hongjialou Police Station. They showed a summons warrant and searched her home. They confiscated a photo of Falun Gong's founder, and 40 sealed letters that were addressed and had stamps. They attempted to take away Ms. Yu but her husband stopped them. They phoned her daughter and demanded that she come to the police station instead.

Ms. Jiang received a call on December 3, 2020. She was asked for her address, and was told to stop by the community office to be photographed while she signed some forms.

Ms. Jiang received another call on March 30, 2021. They asked the same thing—that she sign forms while being photographed. She was told that she would not be counted as a practitioner and her name would be removed from their list if she did.

Mr. Chen Xianju and Mr. Yang Kai from Xiangyang Town were arrested on the afternoon of April 7, 2021, and their homes were ransacked. Their computer, cash, and other belongings were confiscated.

Ms. Zhang Shuying was harassed and followed multiple times by local police before the Chinese New Year. She refused to sign a guarantee statement. She was arrested on the afternoon of April 8, 2021, and detained in the Xiaohenan Detention Center under 15-day custody.

Mr. Wang Shanjun will be tried in the Yingzhou District Court on April 15, 2021.

Ms. Wang Yumei and Ms. Zhao Huanrong from Hougushan Village received harassing phone calls from the Beishi Police Station. Their family member’s jobs were threatened, and they were told that they had to go to the Beishi Police Station in person accompanied by their family members on March 25 and 26, 2021. They were forced to listen to slander against Falun Gong. Ms. Zhao was kicked when she lowered her head.

Ms. Shang Sulan was arrested at around 7 p.m. on March 25, 2021, by officers from the Miyun Reservoir Police Station, including Xiao Chunming, head of the Miyun District police station. Her current whereabouts are unknown.

Mr. Ma Fudong from Jugezhuang Town, Miyun District was arrested by officers from the Jugezhuang Police Station a few days ago. His whereabouts are unknown.

Ms. Lu Zhengqin from Laiwu District was arrested at home by officers from the Laiwu District Police Department on March 14, 2021. Her family was forced to pay 5000 yuan to bail her out. She was released on bail pending trial.

Ms. Li Meizhen, 74, from Baiyangbu Village, Fangzi New District, was arrested when she was talking to people about Falun Gong in the Fangzi Market, and her home was ransacked. The police confiscated one copy of the book Zhuan Falun, one Zhuan Falun Volume II, and other Dafa books. They also photographed the interior of her home.

Ms. Liu Guihua was arrested by officers from the Luolong District Police Department and was sent to the Luoyang City Detention Center. Ms. Zhao Hongjuan was also arrested at the same time with Ms. Liu.

Ms. He Xuelan was harassed at home at around 2 p.m. on February 20, 2021, by three police officers, two plainclothes officers, and Li Banghong, the Party secretary in Lianquan Village, Jiuchi Town. Ms. He refused to sign a guarantee statement. Her husband was pressured to sign it on her behalf.

Ms. He was repeatedly harassed at home—on March 24, March 29, April 1, April 2, and April 5, 2021. Party secretary Li Banghong and town community member Zeng Xi went to her home to take photos and repeatedly told her not to practice Falun Gong.

Ms. Zhang Yingli’s son received multiple harassing phone calls from the Zhaozhou County Police Department since the second half of 2020. They looked for Ms. Zhang and demanded that she sign the three statements as part of the “Zero-out Campaign.” The police also went to several temporary places that Ms. Zhang stayed to look for her, but did not find her. Her son is now receiving harassing phone calls from them.

Four practitioners from Hongtoushan Town, Qingyuan County were arrested by local police when they were distributing truth-clarifying materials in Huangqizhai Town, Tieling City on March 10, 2021. The practitioners included Ms. Yang Xiaozhi, Ms. Shi Hongxiang, Mr. Zhu Qinghua, and Ms. Lin Guilan. They were taken to the Kaiyuan City Domestic Security Division. When Ms. Yang Xiaozhi developed symptoms of high blood pressure on March 15, 2021, she was allowed to be bailed out pending trial.

Ms. Yang’s family received a call from the Kaiyuan Domestic Security Division on April 6, 2021. Ms. Yang went to the division with a family member. She was interrogated there for six hours.

Ms. Cui Feng and Ms. Su Caiyun were arrested at Ms. Cui’s home by officers from the Changyingzi Police Station on the afternoon of March 29, 2021. They were placed in criminal detention and detained in the Fumeng County Detention House. Their families were informed that they would be sent to the Xindi Detention Center 20 days later.

Ms. Zhang Wanling was arrested by officers from the Railway Police Station in Fuxin City for carrying Dafa books and an MP3 player on the train on March 31, 2021. She was placed in ten-day detention.

It was learned that the cases against Ms. Wang Junping and Ms. Hao Tingzhen were submitted to the Fengtai District Court by the Lugouqiao Police Station and the Puhuangyu Police Station respectively.

Hu Xingxian (gender unknown), 78, was arrested by officers from the Fangzhuang Police Station in Fengtai District on April 23, 2020. Now Hu’s case was submitted to the Fengtai District Court and Hu will soon be tried in court.

Three people from the Xindu District went to Ms. Yang Congqing’s parent’s home on March 18, 2021. They photographed the house.

Ms. Huang Xianglin, who was just released from prison, was harassed at home at around 2 p.m. on January 5, 2021. Several people from the Shibantan Sub-district Office went to her home and questioned her as to whether she still practiced Falun Gong. They threatened her husband and said that their children and grandchildren would be implicated if Ms. Huang still practiced.

Six people from the Shibantan Sub-district Office, led by village official Zhang Yougen, went to Ms. Huang’s home again on the afternoon of January 25, 2021. Zhang Yougen photographed Ms. Huang with his cell phone as soon as he entered the room.

Ms. Cang Hong from Qianbanlashan Community went to the Ershilipu Sub-district Office for her daughter’s volunteer certificate on March 5, 2021. Village official Lu Deming told Ms. Cang to sign a three statements document on behalf of her mother Ms. Liu Fengying, which she refused. Ms. Cang’s mother tore up the three statements when her daughter took the papers back. Lu called a few days later and was told that the papers were torn up. Lu called Ms. Cang’s second older brother and he also refused to cooperate because his mother told him not to sign.

Lu told Ms. Cang on March 24, 2021 that the papers were about the “Zero-out Campaign,” and that once one signed, one’s name would be removed from the list no matter whether one practiced Falun Gong at home or not.

Ms. Liu Fengying was harassed at home by two police officers, led by village official Sui Ming, on the afternoon of March 30, 2021. They photographed everything inside her home.

Ms. Wang Baozhu has been harassed repeatedly by people from the Dagang Shengli Police Station in Binhai New District, the Comprehensive Management Office, and the local community office, from late 2020 to early 2021. They followed her, knocked on her door, and instigated her neighbors to monitor her and her family. They threatened her with her adult child’s government job in order to force her to sign the three statements.

Ms. Liu Cuilan has been harassed at home multiple times by people from the Dagang Shengli Police Station, the Comprehensive Management Office, and the local community office, from late 2020 to April 2021. They tricked Ms. Liu’s husband and her child into persuading her. Under their pressure, her husband threatened to divorce her. She was threatened and told that her child might lose their government job because of her.

Ms. Wang Jinguo has been harassed at home and received harassing calls from the Dagang Shengli Police Station, the Comprehensive Management Office, and the local community office in March and April of 2021. Her husband was coerced into persuading her to sign the three statements.

The other practitioners, including Du Baozhu, Yu Guoli, Chen Yumei, and Han Xiuhui, were also harassed.

Three practitioners from Gao’an City were tried and sentenced by the Yuanzhou Court in Yichun City from February to early March 2021. Ms. Liao Sanying was sentenced to three years and four months in prison, Tong Mingbiao (gender unknown), to two years and four months in prison, and Chen Xiaoying (gender unknown), to four years to be served outside of prison.

Ms. Jiang Meixiu was arrested by officers from the Chengnan Police Station in January 2020. She is still detained in the Yuanzhou Detention Center.

A one-day brainwashing session was held at the Yuxiang Bean Product Company by the the Yushu City 610 Office and the Yushu Political and Legal Affairs Committee on March 18, 2021. Falun Gong practitioners were forcibly taken there. Li Tiecheng was assigned to be in charge of “transforming” them. They were told they would be given 30,000 yuan for each practitioner they transformed.

Ms. Jiang Yuzhi from Dongshijiatun, Yumin Township was arrested at home by village official Zhang Zhiquan and a police officer. She was forcibly taken to the brainwashing center on the morning of March 18, 2021. Her neighbor Li Jie was paid 100 yuan a day to monitor Ms. Jiang during the brainwashing session.

Mr. Hao Zhanguo was harassed by Li Songlin, an official in Kalu Village, Chengfa Township on March 18, 2021. He was pressured to sign a guarantee statement and to scold the founder of Falun Gong while being videotaped.

A brainwashing session was recently conducted by the Anqing City 610 Office inside the Zhenfengta Hotel. Several practitioners were taken there on April 9, 2021.

When Ms. Wang Qin and her husband Mr. Zeng Yilong went out to do something, as soon as they walked outside their home, they were grabbed and shoved into a car. After they were driven around for a while Mr. Zeng was let out of the car. Ms. Wang Qin was transferred to another car and taken to the brainwashing center inside the Zhenfengta Hotel. When Ms. Wang refused to cooperate, three people forcibly grabbed her hand to sign her name on the three statements and to press her fingerprint on it. Ms. Wang was released at around 3 p.m. that day.

Mr. Cao Xiongbin was also forcibly taken away from his workplace by several people on the same day. He was apparently also taken to the brainwashing center.