(Minghui.org) Today's news from China includes incidents of persecution that took place in 25 cities or counties in 10 provinces, where at least 34 practitioners were recently persecuted for their belief. 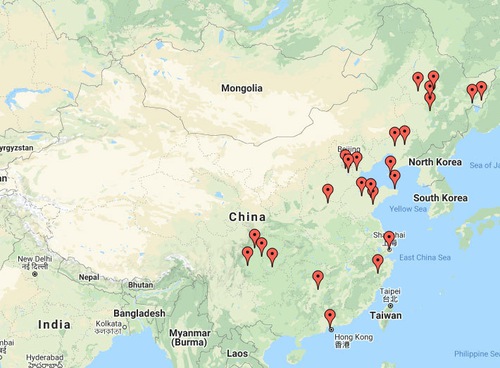 Ms. Qin Yuexiu was harassed at home by an officer from the Changzheng Police Station in the Putuo District on March 2, 2021. He asked whether anyone visited her recently and told her to go to the police station to give a statement. After Ms. Qin refused to say anything, he called three more officers. They tried to take her by force but failed.

Officials from Nanxindian Township in Xiangfen County, Shanxi Province, went to the home of Mr. Zhao Hongbo’s brother on April 1, 2021, and pressured him to sign statements on Mr. Zhao's behalf. He refused.

One officer and two staff members from the local community in Songjiang District, Shanghai, came to Mr. Zhao’s workplace on the afternoon of April 6, 2021. They tried to get Mr. Zhao’s home address and his phone number.

Ms. Cao Yanfen, Mr. Cai Youzhong's wife, was arrested on July 19, 2019, and was later sentenced to seven years in prison and fined 10,000 yuan. She is currently detained in the Jilin Women’s Prison. Her family members have not been allowed to visit her for nearly six months.

Mr. Cai’s older brother Mr. Cai Youzhi, was harassed at home by officers from the Xiushui Police Station in November 2020. As part of the “Zero-out Campaign,” they tried to get Mr. Cai’s phone number.

Ms. Hu Tongyu had been detained for 12 days. The physical examination before she was detained showed everything as being normal. On the same day after she was released, she showed abnormal health symptoms, severe thirst, sharply increased appetite, memory loss, etc. Later, more symptoms developed, including a foul smell of urine, being extremely itchy around the private areas, the whole body feeling weak and tired, and severe weight loss.

Ms. Hu had an eye problem in June or July last year. Her eyeballs protruded and her vision deteriorated. She was unable to read anything and would get lost even walking in the residential community.

Ms. Liao Guanghui was arrested at home by several officers from the Huayuan Police Station and the Fucheng Police Department on the afternoon of July 20, 2019. Her home was ransacked. She had been detained in the Mianyang Detention Center for more than one year before she was sentenced to jail.

Ms. Liao was tried in the Fucheng District Court on September 1, 2020, and was sentenced to four and a half years in prison with a three-year probation. However, the verdict was changed by the court on September 25, 2021. She was sentenced to three years in prison and fined 3,000 yuan. Ms. Liao was taken to the No. 5 Ward of Chengdu Women’s Prison on January 21, 2021.

Her family received a call from the prison guard at around 5 a.m. on March 10, 2021, and was told to go to the Huaxi Hospital to sign the agreement for brain surgery. Ms. Liao was forcibly transferred to the prison hospital on March 30, 2021, while she was still in a coma. She has been in a coma in the hospital till today.

Ms. Tan Xiaorong and Ms. Liu Xiaoli from Jingui Community were reported to the police for talking to people about Falun Gong in Fuxing Township. They were arrested by officers from the Fuxing Police Station and taken to Ms. Tan’s home in a police car. Ms. Tan’s home was ransacked. After they refused to sign a guarantee statement, they were taken to the Yongxing Detention Center and held in custody for 10 days.

Mr. Bai Shuangcheng and his wife Ms. Cui Yunyun live in the Hongxiali Community, on Hangu Street in the Binhai New District. They have been missing since March 24, 2021.

Ms. Sun Jing was detained in the Weihai Detention Center for two months and 14 days. She developed illness symptoms and was released on bail pending trial for medical treatment. She was told to pay 20,000 yuan for the bail and not to leave her current residence. After Ms. Sun was arrested and her home ransacked, her personal belongings such as all her Dafa books, the photo of Falun Gong's founder, and many other items, were confiscated.

Mr. Wang Pingshen was arrested by officers from the Haiqing Police Station in the Huangdao District of Qingdao City on December 24, 2020.

His family received a phone call from the Jinan Prison in Shandong Province and was informed that Mr. Wang was sent to the prison on March 9, 2021.

Mr. Qu Kean from Boshan District, 70, was arrested in November 2020. He was recently sentenced to one year in prison.

Mr. Qu was subjected to three years of forced labor and was detained in the Qiugu Labor Camp in the Boshan District from 2001 to 2003. Afterwards he was constantly harassed by the police. He was sentenced to jail in 2012.

The case against Ms. Zhang Jinying was submitted to the Kuiwen District Procuratorate by the Kuiwen Police Department on April 7, 2021.

Ms. Zhang was arrested in mid-May 2020 for telling people about Falun Gong. She was released on bail pending trial. Her case was submitted one month before the end of her bail.

Ms. Liu was sentenced to 11 years in prison during the first instance and 7 years during the second instance.

Ms. Jia Shufen from Xiahuliang Village was harassed by five officers, led by the head of the Dongxianpo Township Police Station on the morning of April 2, 2021. Ms. Jia was pressured to sign a guarantee statement, which she refused. Her son was pressured to sign it on behalf of his mother, which Ms. Jia told her son not to do.

Mr. Wang Yushen from Northeast China lives in Xinzhang, Bazhou City. His home was ransacked by two officers from the Xinzhang police station. About 40 Dafa books, truth-clarification materials, and paper currency with Falun Gong facts printed on them, were confiscated. Eight police officers arrested Mr. Wang. He is currently detained in the Bazhou Detention Center.

Ms. Wang Laiqin lives in Kongyu Village, Linqi Town. Six plainclothes officers went to her home on the morning of April 1, 2021. Ms. Wang was arrested and taken to the Anyang City Detention Center.

Ms. Jin Feng from Hu Town was arrested in the factory where she worked on April 7, 2021, by the local police and the town government officials. Her whereabouts are unknown.

Ms. Li Fengying and Ms. Xiao Yudi were reported to the police for distributing truth-clarifying materials and talking about Falun Gong on the street. They were arrested by officers from the Changhu Police Station in the Zhengxiang District. They were handcuffed and interrogated. Ms. Xiao Yudi was released the same day.

Ms. Li Fengying was taken to the Baishazhou Detention Center and detained for 11 days.

Ms. Qu Shumei from the Yuantai District was reported to the police for talking about Falun Gong and arrested on April 5, 2021. Her home was ransacked. Two photos of Falun Gong's founder, three media players, 30 small speakers, 78 copies of “The Ultimate Goal of Communism”, and twelve truth-clarifying booklets were confiscated.

Ms. Wang Ruifeng from Dahushan Town was arrested on April 2, 2021. She is now detained in the Jinzhou Detention Center.

It was learned that Mr. Deng Liping, 75, was sentenced to two years in prison in early 2021.

Ms. Gao Hongwei went missing in early December 2020 when she went out to distribute truth-clarifying materials. She was arrested and detained in the Yaziquan Detention Center.

Her husband Mr. Li Changzhu was recently arrested. After he served 15 days in administrative detention in the Xiangfang District Detention Center, he was placed in a white van and taken to a detention center opposite the Beidahuang Agricultural Park. He is still detained there.

Sun Changchu (gender known) from Longfeng District was harassed at Sun's workplace on April 7, 2021. Zhang Jin, deputy director of the Longfeng District Political and Legal Affair Committee went to talk to Sun. He warned Sun that refusing to sign the three statements meant Sun would lose the government job and be arrested—even Sun’s children's and relative's schooling and jobs would be impacted. He took Sun’s family members with him in order to pressure Sun to give in.

The daughter of 79-year-old Ms. Wang Yiying from Beilin District, received a harassing phone call from a staff member in the Ailu Community Office, who asked whether Ms. Wang still practiced Falun Gong. Her daughter was told that there would be a home visit from them if she said yes.

Mr. Liu Zhulin received a harassing phone call from a staff member from the Jinpeng Community Office on March 31, 2021 who asked whether he still practiced Falun Gong. After he said yes, the person said that a supervisor would randomly choose which practitioners' home would be inspected and whoever was picked, must write a guarantee statement.

Mr. Luo Libin was arrested and detained in the Mishan Detention Center for four months.

Mr. Chen Guoqing is a doctor in the Central Hospital of the former Mudanjiang Agricultural Reclamation Bureau. He was arrested at his workplace on March 31, 2021 and was directly taken to his home. Officers from the Mishan Domestic Security Division raided his home. They confiscated three Dafa books and a seal. Mr. Chen was interrogated in the Mishan Police Department and was released around 4 p.m. that day.

Ms. Li Minzhi was arrested on July 12, 2021 during an operation related to the “Zero-out Campaign.” She was released on bail pending trial for medical treatment.

Ms. Li was informed by police on April 2, 2021 that her case would be submitted to the Mishan Procuratorate. Even though her health was poor, she was forcibly taken to the procuratorate. The prosecutor refused to take the case because the bail was not yet set and he was waiting for more evidence.