(Minghui.org) Today's news from China includes incidents of persecution that took place in 18 cities or counties in 11 provinces, where at least 34 practitioners were recently persecuted for their belief. 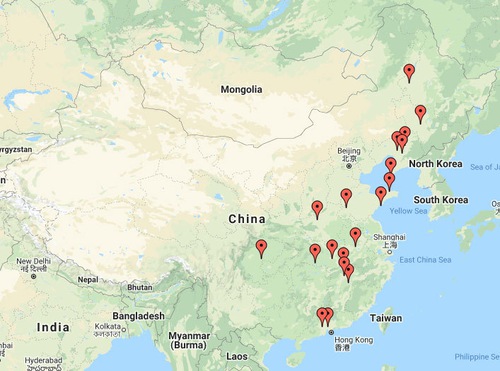 Mr. Liu Runlin is still being held in the Elderly and Disabled Team, in a prison in Dalian. He had previously been held in a small, dark room. He has developed symptoms of cerebral thrombosis (stroke). His eight-year prison term was set to end on December 30, 2021.

The Luolong District Police Department recently arrested Ms. Wu Yongfeng and three other practitioners in Luolong District on the grounds that they distributed Falun Gong materials. The police ransacked their homes and confiscated their Falun Dafa books and printed materials.

Ms. Ma Qin, who was awarded the title of Outstanding Teacher in Pingdu City, was arrested in her own community in the early evening hours of March 28, 2021. Her home was ransacked. She was held in the Taishan Road Police Station that night. Her husband was also arrested at the same time and was released the following afternoon. The officers forced him to sign the search warrant. Ms. Ma’s whereabouts are unknown.

Ms. Ma was previously arrested at school by Pingdu City police on August 9, 2010. Around 3 a.m. on August 10, she left even though an officer was watching her. She was on the police wanted list.

Mr. Yang’s mentally handicapped daughter was left unattended. The police are now staked out in front of and behind his home.

At the same time three officers from the police station went to Ms. Xu Jingwen’s home and tried to arrest her, but she was determined not to go with them. When the officers pushed and dragged her, she suddenly began convulsing and fell to the ground. Her husband wanted to immediately take her to the hospital. The officers were afraid of being held responsible and left quickly.

On March 29, the lawyer met with Ms. Li. She was transferred to the Dongguan City No. 2 Detention Center on the afternoon of March 18. She was interrogated until 8-9 p.m. that day. From March 19 - 24, she was interrogated continuously, from 10 a.m. to 5-6 p.m., for seven consecutive days, and was repeatedly asked the same questions. She was only given a steamed bun and a little water. She was placed in a cell with 38 people, where she was often scolded and physically punished.

Since 2021, the authorities have repeatedly been harassing Ms. Xia due to the “zero-out campaign.” They also claimed they were “retiring archives.” This has brought tremendous pressure and pain to Ms. Xia and her family.

From February 12-27, officer Chen from the Fuzhou City State Security Division went to her mother’s home to ask for her address and other information. Her 80-year-old mother was terrified. During this period, director Jiang from the Houhutian Community in Fuzhou City called Ms. Xia and harassed her. Around the Lantern Festival (February 26), members of the Houhutian Community called to harass Ms. Xia’s elder brother and asked for information about her.

On March 8, 2021, two police officers from the Wanjiang Sub-district Office in Dongguan City, Guangdong Province, went to the rented home of Ms. Xia’s son to harass him. They took photos and made recordings.

Currently, Ms. Xia’s mother has been admitted to the hospital for treatment due to threats and harassment over an extended period of time. Her younger brother, who is taking care of their mother in the hospital, hopes that the relevant officials will stop harassing them, and not further upset their elderly mother.

Ms. Li Xuying was reported to the police for talking to people about Falun Gong and was arrested by officers from the Douhudi Police Station in late March 2021. Officers pressured her to sign paperwork, but she refused. They forced her youngest son to sign paperwork before letting her go home.

Mr. Liu Longping, who works at the Gong’an County Bureau of Industry and Commerce, was called to his workplace in late March, for a “talk” which was to be recorded. He refused to cooperate and did not allow them to record anything.

Deputy director Luo Xianzi, of the Gong’an County Maternity and Child Health Hospital, and chief Zhang Lin, of the security department, drove a 120 emergency response ambulance and brought three security guards to Ms. Dong Shijun’s home and harassed her at around 10 a.m. on March 29. They tried to photograph her. Ms. Dong stopped them. Instead she clarified the facts about Falun Gong.

Mr. Liu Zengkui and Ms. Liu Bobin from Xiangfang District will be tried via video link by the Daoli District Court at 8:30 a.m. on March 31, 2021.

Ms. Ma Yan from Lushun City was arrested by officers from the Xianglujiao Police Station on March 23, 2021. The hearing that was originally scheduled for 1:30 p.m. on March 26 in the Ganjingzi Court was canceled. Ms. Ma is being quarantined in the Yaojia Detention Center.

Ms. Zhou Shuying, 84, from Penglai District, was reported to the police while talking to people about Falun Gong at the Wenshitang Farmers Market in Cunliji Town on March 29, 2021. Four police officers arrived and grabbed her bag. They confiscated over 20 booklets and a list of people who decided to quit the Chinese Communist Party and its affiliated organizations.

Ms. Sun Dongmin, nearly 70, and her sister Ms. Sun Junying, 65, former employees of the Wuhan Power Company, were arrested when talking to people about Falun Gong in January 2021. They were officially arrested recently and have been held in a detention center.

Their mother, nearly 90 years old, is seriously ill, bedridden, and unable to take care of herself. No one is available to attend the elderly lady.

Ms. Pu Yuxian, a retired employee of Jiangling Group, and her husband received a phone call from director Lei of the West Community of Jianglingliyuan No.1 District during the “zero-out” campaign in January 2021.

After the couple went to the community office, Lei pressured them to sign guarantee statements. Lei told them that if they signed the statements, their names would be removed from the list compiled by the government and they would not be disturbed. Ms. Pu refused to comply.

Later, community management office members called and harassed Ms. Pu’s husband and son many times, saying that if she did not sign the guarantee statements, her household registration had to be transferred elsewhere. Unable to bear the pressure, Ms. Pu’s husband went to the community without telling her in early March and signed the guarantee statements on her behalf.

After Ms. Pu learned about it, she felt terrible. She went to the community to make a statement in person and handed them a statement affirming that she was determined to practice Falun Gong.

Ms. Tang Juzhang was sentenced to a one-year-and-two-month prison term. She will be released on July 24, 2021.

Secretary Huang of the Political and Legal Affairs Committee of Dongxing District and Zhong Xia, who is in charge of community Internet content monitoring in the Xilin Sub-district Administration Office, recently went to Ms. Mo Qun’s home. He and others pressured her to sign guarantee statements. They threatened that if she did not sign, it would adversely impact the jobs of her son and daughter-in-law.

Since March 24, 2021, the Liangshan County Court called Ms. Qi Gui’e’s sister and brother many times to pressure Ms. Qi to go to the court to sign paperwork and get a physical exam. If she was healthy, she would be imprisoned. Ms. Qi’s pension has been withheld since February 2021.

Pressured by her family, on March 30, 2021, she went to the court to talk to the person in charge of her case, Huang Hongyong, and clarified the truth to him again. Huang threatened her and said that her case would be reported to Jining City and she would be sentenced to prison again if she did not undergo a physical examination or sign paperwork.

Ms. Tan Meiguang from the Nanhai District was arrested on the street on March 11, 2021. She is being held in custody.

Eight people from the Yong’an Police Station in Chancheng District and the Diejiao Police Station in Guicheng Sub-district went to Ms. Tan’s home on March 29. They told her family that all it took was for her to provide the names of fellow practitioners she was associated with and to write three statements, and she could soon return home.

Ms. Chen Lina was arrested at home by officers from the Shuguang Police Station on March 22, 2021. Her home was ransacked. She is being quarantined in the Xiuyan Detention Center.

Ms. Tang Huiping, 68, was arrested by officers from the Zhengyang Street Police Station in 2019. She was taken to the Changchun City No. 4 Detention Center, which refused to accept her due to her high blood pressure. She was released on bail.

At the end of 2020, police officers came to harass and attempted to arrest her again. She was not arrested as her blood pressure was over 200. They confiscated all of her Falun Dafa books and photos of the founder of Falun Gong.

She lived alone and no one has heard from her for over three months. After numerous inquiries, it was learned that she was arrested again and the police took her to the detention center. She is currently being held in the Patients Ward in the Changchun City Central Hospital.

Ms. Tian Biying and Ms. Yan Xiaodong were arrested when talking to people about Falun Gong and distributing Falun Gong materials on the morning of March 29, 2021. Further details are pending.

The director of the Taohaotai Township Police Station, Qianguo County, and another officer located Mr. Wang Shenbo and Ms. Ju Guiqing in Jianbala Village on March 25, 2021. They tried to force both practitioners to say that they would no longer practice Falun Gong, and to sign a form prepared in advance by the police. Ms. Ju’s son signed the form on her behalf.