(Minghui.org) Today's news from China includes incidents of persecution that took place in 14 cities or counties in 8provinces, where at least 29 practitioners were recently persecuted for their belief. 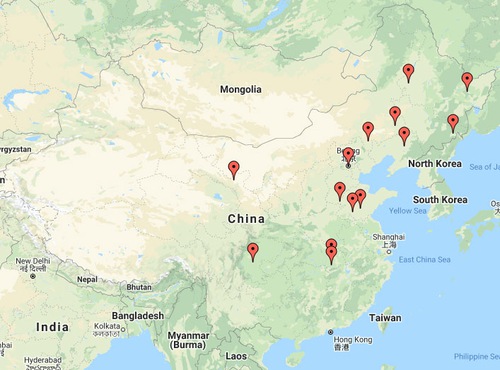 Mr. Zhang Zhifeng was arrested by officers from the Yunmenghu Police Station when he posted Falun Gong flyers in April 2020. He was released on bail after he paid 10,000 yuan.

The Yunmenghu Police Station recently submitted his case to the procuratorate.

Ms. Li Chunlian from Jiangxia District was arrested at home by five or six persons led by village party secretary Zeng Chunying on March 15, 2021. She did not open her door for them. They had her ex-husband, who lives nearby, come and persuade her to let them in. She was arrested after she opened her door. Her ex-husband received an unexpected call from Zeng on April 1. Zeng said Ms. Li had been on a hunger strike. She was taken to a hospital and diagnosed with several illnesses. April 1 was a stormy day. Her family was told that she escaped from the hospital after 10:00 p.m. Her family is dubious and worried about what really happened to her. Three days have passed but they have not heard any news about her.

Mr. Wang Xianqiu of Jiangxia District was secretly arrested in early February 2021. He was held in a brainwashing center near a primary school in the Guanshan area.

Ms. Meng Lichun of Jixian County was arrested by officers from Yilan County in September 2019. She has been held at the Harbin City No. 2 Detention Center for 18 months and deprived of family visits. Her family recently hired a lawyer. The lawyer visited the detention center and was told no such person was there, then he was directed to the Harbin City Women’s Prison. The lawyer went the prison and was told no such person was there, either. The lawyer went back to the detention center. The guards finally admitted that Ms. Meg was taken away by police two or three days before, but they gave him no details. Her current whereabouts are unknown.

Mr. Guo Zhenfang and wife, Ms. Feng Yuhua, will be tried by the Songshan District Court on April 8, 2021.

Hou Yunxia (gender unknown) was arrested by the Tongliao City police for distributing Falun Gong fliers in a parking lot on March 24, 2021.

Ms. Yang Xiaohua of Tongcheng County was arrested on the morning of March 23, 2021 for talking to people about the persecution of Falun Gong. When the police arrested her, her limbs cramped, she collapsed to the ground and lost consciousness. She was taken to the county hospital. She was diagnosed with severe illness and released. Police searched her bag and seized 4,000 yuan in paper currency with Falun Gong messages printed on them.

Ms. Cao Fang was harassed at home by three men and a woman from the Xinhua Road Police Station and the Yongchang County Court on April 1, 2021. They came to “collect evidence” for trial. They brought a computer and a printer. Two officers had a camcorder rolling the entire time. Ms. Cao was recently released from a detention center and was resting in bed, recuperating. She did not cooperate with the illegal interrogation. They stayed there for two hours and left empty-handed.

Ms. Zhan Lihua worked at the Shandong Energy Corp. She was imprisoned for two years for her faith. Starting from March 2021, the Shandong Province Social Insurance Center started to deduct those two years’ pension from her monthly pension.

Ms. Lu Xiufeng was last seen talking to people about the persecution of Falun Gong in the Dianzi Township Open Market on March 31, 2021. Her whereabouts are unknown.

Ms. Cui Qunying was searched by security, then arrested by Domestic Security Division officers when she was waiting for a high speed train in the West Yanji Station on April 3, 2021. She is being held at the Railroad Police Station.

Ms. Lu Xiuru is being held at the Shenyang City Detention Center.

Ms. Zhang Guishu of Yangzhen Town was arrested by director Wang and five officers from the Yangzhen Police Station on March 30, 2021. She was held in police custody. Guards did not allow her family to see her or bring her necessaries. Instead, they asked for money.

Mr. Chen Guojun of Ziyang City received a call in mid-January 2021 from a school in the town where he was a registered resident. He was told that town Party secretary Chen Zhi and Comprehensive Management Office member Li would talk to him. He dropped the call. The caller then phoned his son. His son called his mother.

Mr. Yang Licheng, Ms. Xu Jingwen, and Ms. Wu Shuzhen were arrested at home by three groups of officers from the Zhanqian Police Station on March 29, 2021. Ms. Xu had a muscle cramp at the scene. The officers left without her. Ms. Wu was released the same day. Mr. Yang’s home was watched. Chen Yujun (gender unknown) went there and was arrested. Mr. Jin Yunfei, Ms. Jin Changmei, and Xiaowei (last name and gender unknown) were arrested. Mr. Jin and Chen were released.

Mr. Zhao Yi was harassed at home by officers from the Longhua Road Police Station. The officers ordered him to sign a paper renouncing Falun Gong. He did not sign it. The officers threatened to come back.

Zhou Xiaolan (gender unknown) was arrested by officers from the Tiefeng District Domestic Security Division at 3:00 p.m. on March 31, 2021.