(Minghui.org) Today's news from China includes incidents of persecution that took place in 9 cities or counties in 4 provinces, where at least 28 practitioners were recently persecuted for their belief. 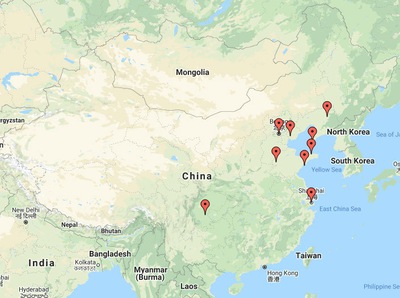 Ms. Wang Zhenghe, 69, was arrested by police officers who were staked out when she and her daughter distributed Falun Gong materials on the afternoon of August 7, 2020. Ms. Wang was held in the Jiading Detention Center. She was later sentenced to two years in prison, which should end on July 4, 2021.

Ms. Wang’s family received a letter from the Shanghai Women’s Prison on March 27, 2021, stating that she had been taken to the No. 3 Ward of the prison. After receiving the letter, her family called the prison and asked to visit her. Prison staff said that family visits were not allowed due to the pandemic.

Ms. Wang is over 70 years old. According to the Shanghai Detention Center, people of her age who are sentenced to less than six months in prison do not have to be held in prison.

The Dongxing District Court was originally scheduled to put practitioners Ms. Fu Tianlu, Mr. Meng Kunlun, Yu Ping (gender unknown), and Ms. He Li on trial on March 11, 2021. It was reported that the trial would be postponed to 9:30 a.m. on April 7.

3. [Beijing] Ms. Jiang He and Her Parents Arrested

The couple was arrested by people from the Ganjiakou Police Station and the community management office on September 7, 2020, and taken to the “Legal Education and Training Base” of the Political and Legal Affairs Committee of Haidian District, which is in fact a brainwashing center.

The human rights lawyer hired by Ms. Guo Yuexia’s family went to the Zunhua City Court to review her files on March 25, 2021.

It was learned that the Zunhua Procuratorate filed a public prosecution against her on January 14, 2021, but the Zunhua Court issued a written document on January 21, 2021, to suspend the case due to the pandemic. Ms. Guo and Ms. Liu Xiumin are still being held in the Tangshan City No. 1 Detention Center.

Ms. Xie Guihua from Houtaolin Community, Chengyang District, was arrested by officers from the Chengyang Police Station on her way home from the Dabeiqu Farmers Market on the morning of March 22, 2021. Her home was ransacked. Her family members still do not know where she is being held.

Ms. Li Shuzhen was arrested at home on July 11, 2020. She was told that she would live under surveillance for six months. She was released and returned home at 1:30 a.m. that night.

On January 6 and 13, 2021, Ms. Li was told to go to the procuratorate twice. On the morning of January 26, two members of the community management office, Yang and Li, went to Ms. Li’s home to harass her and photograph her. Ms. Li stopped them and told them the facts about Falun Gong.

After Chinese lunar New Year’s Day (February 12), a person from the Jinxing Community Management Office of Paoya Sub-district called and harassed Ms. Li over the phone on February 20, and told her to sign the three statements. Ms. Li thoroughly explained the facts about Falun Gong to the person.

Ms. Chang Shurong from Zhangfang Town, Fangshan District, was arrested by officers from the Zhangfang Police Station on April 7, 2020. Her home was ransacked. She was held in the Fangshan Detention Center.

She was tried in October by the Fangshan Court. Both she and her lawyer pleaded not guilty. The judge did not pronounce the verdict due to insufficient evidence. She is still being held in the detention center.

She was secretly tried by the court on March 18, 2021. She was sentenced to a one-year-and-six-month prison term and fined 2,000 yuan. She remains in the detention center.

On March 10, staff from the Gulou Sub-district Administration Office called to harass practitioner Zhou (gender and first name unknown). On March 11 and 14, Liu Xiaozhi, from the Political and Legal Affairs Committee of Dongchangfu District, and others went to Zhou’s home for harassment. Around March 16, the Gulou Sub-district Administration Office called again to harass Zhou.

People from the Xinqu Sub-district Administration Office and the local police station harassed Ms. Guo Xiuping’s daughter on March 15. They photographed her. Ms. Guo was arrested on January 13, 2021, and later was officially arrested.

People from the Xinqu Sub-district Administration Office and the local police station harassed at least five practitioners on March 17, including Wang, Pen, and Xiu (their genders and first names are unknown).

In mid-March people from the Xinqu Sub-district Administration Office and the local police station called and harassed Ms. Zhang’s husband and daughter.

Staff from the Political and Legal Affairs Committee of Dongchangfu District called and harassed practitioner Jiang (gender and first name are unknown) in the tourist resort in mid-March.

Officers from the Liaoda Police Station harassed at least two practitioners, Xu and Ren (their genders and first names are unknown), in the Longshan Residential Community on the afternoon of March 19.

Staff from the Liaoyuan Sub-district Administration Office called and harassed practitioner Zhou’s son on the morning of March 23.

Ms. Wang Jiemei’s lawyer met with her on March 26, 2021, and learned that she developed symptoms of cerebral thrombosis (stroke) and had difficulty moving one side of her body. Her blood pressure reached 170. The detention center gave her antihypertensive drugs.

Officer Yang Qiang from the Gaokan Police Station in Shenyang City called Ms. Wang’s family on the afternoon of March 26 and notified them that she had been officially arrested. They told her family to go to the police station to pick up the notice.