(Minghui.org) Falun Dafa practitioners in Wellington, New Zealand, held a march and rally on April 13 to commemorate the peaceful protest held in Beijing before the persecution against the spiritual practice began 22 years ago.

Falun Dafa, also known as Falun Gong, is a meditation system based on the principles of Truthfulness-Compassion-Forbearance. As Falun Dafa's popularity increased, the Chinese Communist Party (CCP) began suppressing the movement, which led to an arrest of a group of practitioners in Tianjin. About 10,000 practitioners peacefully gathered in Beijing on the following day, April 25, 1999, to appeal. Three months later, the CCP launched a nationwide persecution.

Practitioners in New Zealand and many other countries hold events every year to raise awareness of the persecution, and call for an end to the brutality. The march on April 13, 2021, started at Cuba Street in central city and was led by the Tian Guo Marching Band. Despite the wind and occasional drizzle, many people stopped to watch and take materials. One lawyer videotaped the march and shared it with his friends. 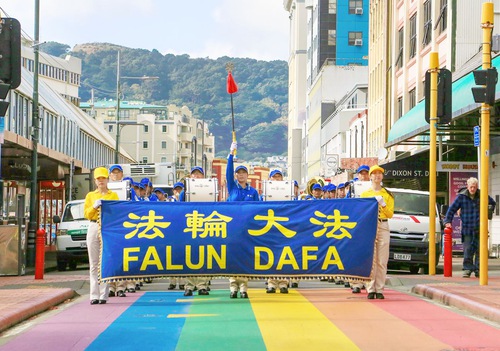 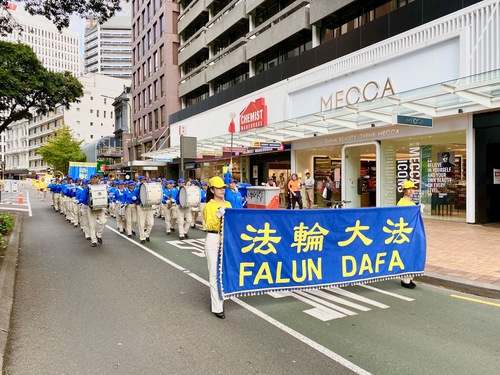 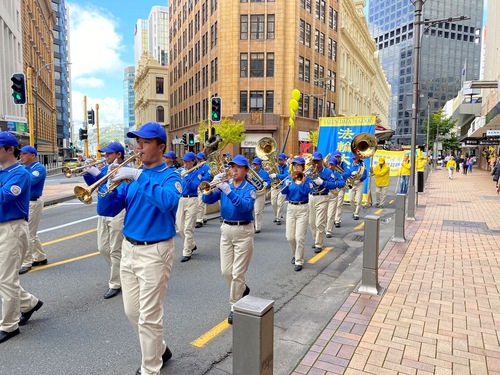 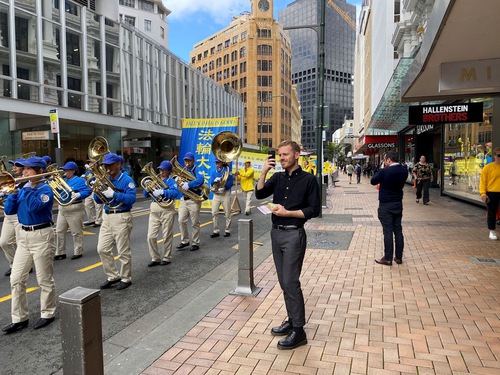 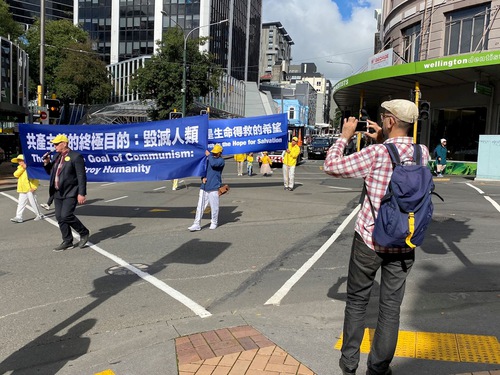 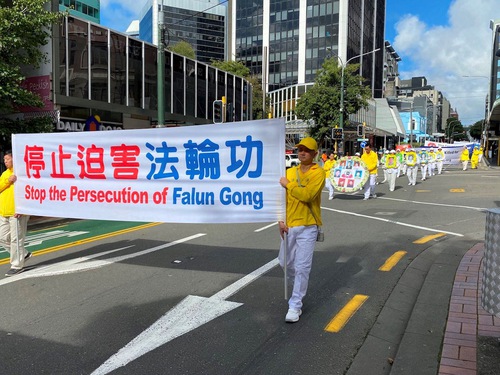 Practitioners held a march in central Wellington on April 13, 2021 to solemnly commemorate the peaceful protest in Beijing 22 years ago.

The march culminated with a rally at the parliament building. Several practitioners spoke and described how they were mistreated in China for their belief. Human rights advocates also spoke at the rally and called for an end to the atrocities. 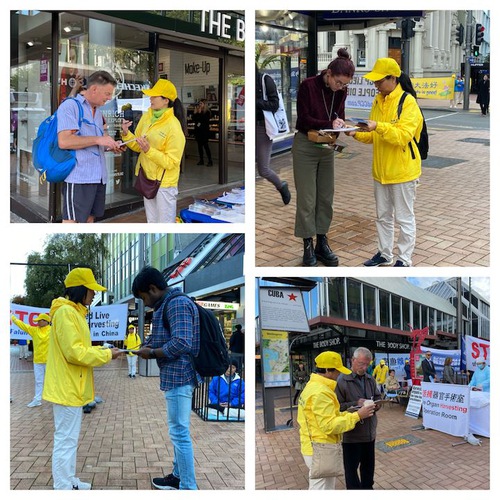 Say ‘No’ to Organ Harvesting

In her speech Macvicar talked about efforts from various countries to stop organ harvesting, along with actions from the New Zealand government. She said this issue is not about China—it is about crimes against humanity and it needs to be resolved. 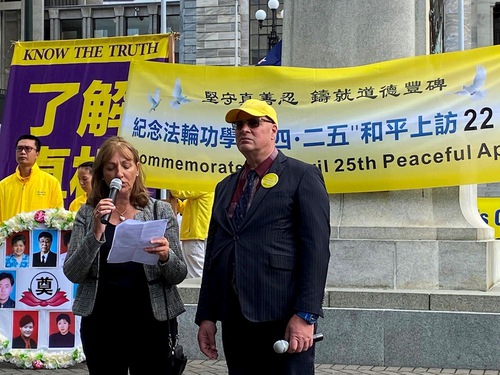 Margo Macvicar from the International Coalition to End Transplant Abuse in China (ETAC) addressed the event.

In early March a bipartisan group of U.S. lawmakers in the House and the Senate introduced the first legislation to combat China’s state-sanctioned practice of forced organ harvesting that targets religious and ethnic minorities known as H.R.1592. If passed, the Stop Forced Organ Harvesting Act would hold the Chinese Communist Party (CCP) accountable for these “inhumane atrocities”. More specifically, the U.S. government would have authority to deny or revoke passports for individuals involved in purchasing such organs.

Macvicar hopes legislation will be passed to discourage organ tourism, condemn extralegal execution of prisoners especially prisoners of conscience for their organs, and bar individuals who participate in organ harvesting from entry. Similar measures have been adopted in Israel, Taiwan, and Spain. In addition, the Council of Europe passed a convention in 2018 against the trafficking of human organs.

Macvicar pointed out that it's important for a nation to stand firmly on moral grounds. This includes opposing regimes that recklessly kill their own people. “We are living in an unprecedented era. That means we need to stand against evil no matter which form it emerges,” she said.

Those Who Support the Righteous Will Be Blessed

The anti-torture exhibition on Cuba Street attracted people's attention. Local resident Joclyne Waaka said her heart was broken at sight of the brutality. “How could a regime be so ruthless to people?” she tearfully asked.

Joclyne said Chinese people have suffered tremendously and she would pray for them. She also thanked practitioners for the information and said it is very valuable. She said she heard about the persecution before, but this was the first time she learned the details. “If people are not shocked by this, then they won't be moved by anything,” she added.

Joclyne said everyone who stands for their principles will be blessed. “I am proud of them – their courage, uprightness, and noble cause,” she said.

She said what the New Zealand government did so far was not enough. She feels it could be because it is a small country—but she pointed out that countries like Australia have already stepped forward. Many other nations have also joined the momentum and urged the CCP to stop the persecution.

Skye Reearna works at a store on Cuba Street and has about 10,000 friends on social media. After talking with a practitioner about the persecution, especially the forced organ harvesting, she was moved to tears. She said the CCP is insane and the suffering of practitioners in China is unimaginable. “These pictures (that reveal the torture) are shocking and you need to tell more people about it,” she said. “These things (done by the CCP) are really disgusting.” 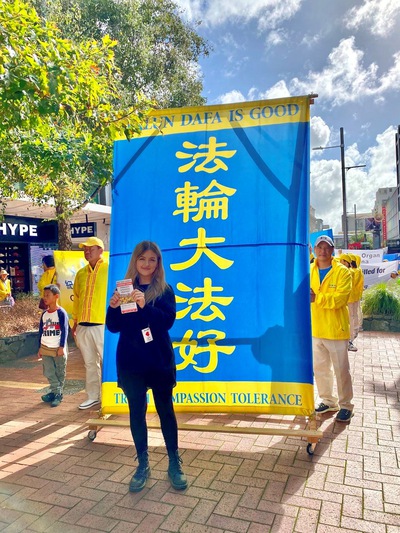 Skye Reearna said the tragedy in China made her cry.

Reearna said she noticed practitioners meditating before the events began and videotaped them and shared with her friends on social media. She praised practitioners for both their exercise demonstration and their efforts to expose the brutality in China. “I can see the principles of Truthfulness-Compassion-Forbearance in their demeanor,” she said, “If we all did things this way – do well ourselves and encouraged others to be good, our society would be much better.”

All Totalitarian Regimes Are Doomed

One woman who works at an embassy was touched by the anti-torture exhibition. Quoting Albert Einstein, she said, “The world is a dangerous place to live; not because of the people who are evil, but because of the people who don't do anything about it.” She pointed out that was why laws were implemented after World War II, to prevent the Holocaust from happening again.

She said, “But what the CCP is doing shows this is not enough. Furthermore, from information obtained by independent media and satellite pictures, the concentration camps in China are very similar. This is is terrifying.” She said she felt as if “her heart was torn apart.”

Because Falun Dafa is a peaceful meditation system rooted in ancient Chinese culture, she couldn't understand why the CCP would persecute its practitioners. “The (CCP) regime wants to control people, but it will never succeed, as all totalitarian regimes are doomed,” she said. 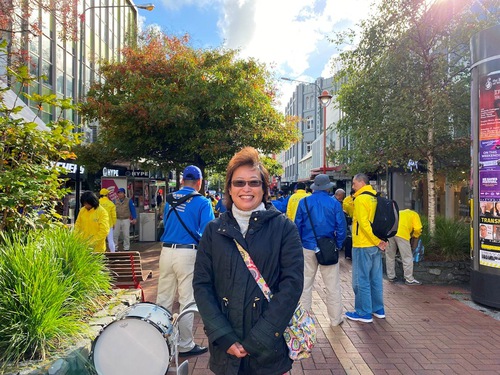 Candy said Falun Dafa is inspiring and she wants to learn the exercises.

Candy immigrated from Singapore 15 years ago and she served in the Navy. She was attracted to Falun Dafa's gentle exercises and is interested in learning the practice. She feels the principles of Truthfulness-Compassion-Forbearance are great because they help people become better. There is no freedom or human rights in China, so what practitioners have done is very meaningful. “I think this is not just about human rights. Rather, it is related to freedom, our future, and the young generations.”