(Minghui.org) Today's news from China includes incidents of persecution that took place in 22 cities or counties in 11 provinces, where at least 51 practitioners were recently persecuted for their belief. 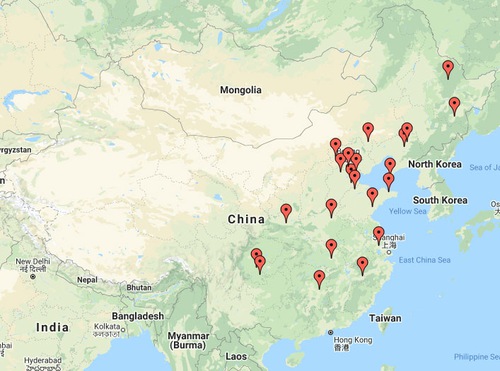 Ms. Liu Mulan from the Xinzhou District was secretly sentenced to four years in prison and fined 4,000 yuan in the first trial. She filed an appeal and the original verdict was upheld by the court during the second trial.

Ms. Liu’s family members asked to visit her, but the court said that they had to pay the fine before they could visit her in the detention center. Otherwise, she would be transferred to prison this week and her family would have to go to the prison to visit her.

Ms. Wang Meihong, a senior engineer, will be tried via video link by the Daoli District Court on March 31, 2021.

Officer Liu Shuqin from the Zhucheng City Domestic Security Division and seven or eight officers from the Linjiacun Town Police Station broke into Mr. Yu Zenggang’s home in Chenjia Village on the afternoon of March 1, 2021. They ransacked his home and confiscated Falun Dafa books, Minghui Weekly publications, and other belongings.

Mr. Yu was taken to the police station and then to the Anqiu City Detention Center the following day, where he is still being held.

Zeng Xiangguo, head of Taiping Town, led seven people from the police station, the community, and the judiciary system to Mr. Hu Biao’s home. They ransacked the place on the morning of March 23, 2021, then ransacked another place where Mr. Hu stayed.

They overturned the cabinets. They demanded that Mr. Hu open the locked cabinets, or they would break the locks and cabinet doors.

They removed Falun Gong informational couplets from the door, and took calendars, calligraphy, paintings, clocks, boxes of incense, incense burners, photos of the founder of Falun Gong, U disks and cards, DVDs, mp3 audio players, theater machines, amulets, bookmarks, Zhuan Falun books, and printed materials, and placed these items on the ground. They photographed them before they left.

Officers from the Jichang Police Station in Xishanbei Township Police Station called Ms. Chen Mengxian in Huzhuang Village on the morning of March 18, 2021. They told her to go to the police station, but she refused.

That afternoon Ms. Chen went to plant trees in her fields. The police went there and arrested her. Ms. Chen’s son Mr. Wu Jinlong and daughter-in-law got into a car and followed them to the police station, where they saw Ms. Chen being transferred into another police car to be taken the Yi County Police Department. Mr. Wu went to get his mother and argued with the officers. The officers arrested both mother and son, and took them to the police department and then to the Yi County Detention Center.

Last November the brigade Party secretary of Beicai Village and officials from the Nancaicun Town government called Ms. Chen Yufeng (in her 70s) to go to the brigade office to sign a transformation statement renouncing Falun Gong. She did not cooperate. They then put pressure on Chen’s two sons. After New Year’s Day, the village Party secretary called her several times. Later, the district Political and Legal Affairs Committee and town government officials coerced her to sign the statement.

Around December last year, the village Party secretary and officials went to Ms. Liu Doudou’s home in Anzhuang Village, Nancaicun Town, and pressured her to sign a transformation statement. Officers from the police station went to the security guard office of the village brigade and told them to pressure her to sign the statement. Town government personnel called her factory director and told him to pressure her to sign.

Three people from the Wuqing District Political and Legal Affairs Committee went to Ms. Liu’s workplace and harassed her on March 25. They threatened her with her job, her husband’s job, and their son's college chances. (Their son is in his third year of high school.) They said that if she did not sign the statement, she and her husband would lose their jobs and would not be able to find one elsewhere. Pang, an official from the Political and Legal Affairs Committee, has repeatedly emphasized that the consequences of not signing the statement would be very serious. Ms. Liu’s husband is handicapped due to poor vision, and he has a cleaning job in the village. He recently suffered a herniated disc. He now earns only 800 yuan a month.

In December 2020, the village brigade, police station, town government, district Domestic Security Division and Political and Legal Affairs Committee personnel put pressure on and forced Ms. Yang Huimin to sign the statement and make a video recording the process. Under this extensive interference and pressure, Ms. Yang suffered a stroke before January 1, 2021. She could not speak clearly, drooled, had difficulty moving around, and felt that her head was heavy. Her family took her to Huanhu Hospital for treatment, and she can now take care of herself.

Mr. Wang Jinyu and Mr. Ji Mingming from Harqin Banner were arrested around December 30, 2019. They were tried in late February 2021.

Elderly Ms. Sheng Yunfang spent five years in labor camps after the Chinese Communist Party began to persecute Falun Gong in 1999. Last year, she was reported to the police while talking to people about Falun Gong. She has since been harassed by the police. This year she is facing a trial.

Mr. Yang Shijie from the Shunyi District was reported to the police and arrested. He is being held in the Shunyi Detention Center.

Mr. Wang Zhongbao and his wife from the Yimei District were arrested on the morning of March 26, 2021. Further details are pending.

Mr. Feng Jiwu’s prison term ended on March 25, 2021. When his family rushed to the Fanjiatai Prison to pick him up at 8:00 a.m. that day, they learned that Mr. Feng had already been taken away by the local police and community officials.

It was reported on March 26 that Mr. Feng was taken away after Zhou Zhong of the Qinduankou Sub-district Justice Office signed the paperwork. His family rushed to the community office to ask for his release, but the officials refused to tell them where he was.

On March 26, Li from the procuratorate called Ms. Wang’s family and said that she was currently living under residential surveillance. If she did not show up by 5:00 p.m. that day, they would call the police to arrest her.

Ms. Cao Hui, in her 30s, was hospitalized when she had a baby. On the morning of March 19, she went to a park outside the hospital, and read Falun Gong materials posted there. She was reported to the police. Several officers from the Jinmingchi Police Station arrived and searched her bag and found a Falun Dafa book and a Falun Gong informational booklet. The officers arrested her, ransacked her home, and confiscated Falun Dafa books. They also went to the home of her parents-in-law to harass them.

Even though she gave birth less than 30 days before, she was taken to a detention center for seven days. The officers also coerced her husband’s work unit to dismiss him and threatened their landlord not to rent the place to her.

Three officers, who claimed to be from the Chengzhen Police Station, broke into the home of 57-year-old Ms. Guan Xiaping on the afternoon of July 23, 2020. They asked her if she was still practicing Falun Gong. When she acknowledged that she was, they began to search through her belongings. They confiscated a copy of Zhuan Falun, Hong Yin V, and an audio player.

Three Domestic Security officers broke into Ms. Guan’s home at 8:00 a.m. on February 2, 2021. They asked her if she still practiced Falun Gong. She answered yes and they searched both downstairs and upstairs of her home. They confiscated a copy of Zhuan Falun and a copy of Teacher’s Fa lectures. They took Ms. Guan to a hospital for a physical examination. Her blood pressure was extraordinarily high. She was then taken to the police station for interrogation.

After the interrogation, Ms. Guan learned that the police issued a 15-day detention notice. The officers forced her to sign paperwork and press her fingerprints, and they photographed her. Ms. Guan was held in the police station during the day. She was taken to a detention center that evening. Her blood pressure was still extraordinarily high. The detention center refused to accept her, and she was released that night.

Ms. Zang Shuling from Huangjia Township was followed and arrested at work in Yanshan County, Hebei Province, by officers from the Laoling City Police Department at noon on March 24, 2021. The officers ransacked her home and confiscated an electric car and an electric bicycle.

Huang Qingxiang (gender unknown) was arrested by officers from the Xiangheyuan Police Station on March 26, 2021. Huang’s home was ransacked.

A staff member of the Guojiagou Village Committee, Yingchengzi Sub-district, Ganjingzi District, led two officers from the Yingchengzi Police Station to Ms. Li Yan’s home on the evening of March 22, 2021, when she returned home from work. They pressured her to sign the three statements, but she refused. They stayed at her place for quite a while before leaving.

Ten practitioners were arrested while studying Falun Gong teachings together at around 3:00 p.m. on March 25, 2021, by officers from the Caihong Police Department.

The youngest practitioner was about 60 years old, and the oldest was about 80 years old. They were not allowed to go home or eat from 3:00 p.m. to 10:00 p.m. The officers wrote down everyone’s home address, national ID number, and their children’s names.

The officers confiscated Falun Dafa books. Four practitioners were released after 10:00 p.m. and the whereabouts of the other six practitioners are unknown.

Three officers from the Jianggezhuang Police Station, Muping District, went to Ms. He Shuxiang’s home on the afternoon of March 25, 2021. They asked if she still practiced Falun Gong. A female officer who was standing in the back was about to photograph her, but Ms. He stopped her.

Six people including deputy director Huang Zhongshu of the Dongxing District 610 Office broke into 79-year-old Ms. Huang Xinmei’s home on March 19, 2021. They demanded that she give up practicing Falun Gong. They cursed Falun Gong and its founder.

Ms. Huang and her 30-year-old non-practitioner grandson were at home on March 24. Two women, who were among the six people that came on March 19, brought some pieces of paper and asked Ms. Huang’s grandson to sign them. In order to reduce the harassment of her mother, Ms. Huang’s daughter asked her son to sign the paperwork.