(Minghui.org) In 1990, the Henan Provincial government in China strongly supported the “Plasma Economy,” a campaign in which people donated blood plasma for sale to biotech companies. Local people saw it as an opportunity to make some money, and middlemen drew huge profits from the campaign. However, due to low health and safety standards, including a general lack of proper sterilization procedures, the widespread plasma collection caused a rapid spread of AIDS and Hepatitis C throughout China. This was later known as the “blood plasma disaster.” Local governments either covered up the disaster or shirked responsibility. The CCP (Chinese Communist Party) remained silent on the matter, and the topic became taboo.

Jia Ping, 60 who lives in Toronto, Canada is a victim of the “blood plasma disaster.” She contracted Hepatitis C through blood transfusions. Practicing Falun Dafa ended her suffering and gave her a new lease on life. 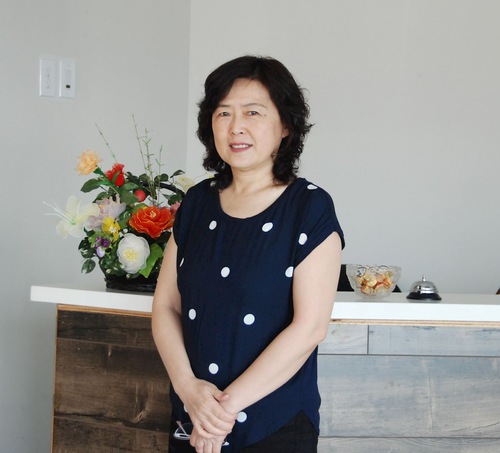 Jia Ping recalled, “I had a hysterectomy in February 1991 and I received 2400cc of blood plasma. The operation was a success and I soon recovered. Just as I was about to return to work, I began experiencing nausea and vomiting. In May that year, I was admitted into the infectious diseases section in the PLA Air Force hospital. Other than high levels of transaminases (enzymes), the doctors could not find anything wrong with me. They sent the tests to a laboratory in Shanghai and the result showed I had Hepatitis C.” 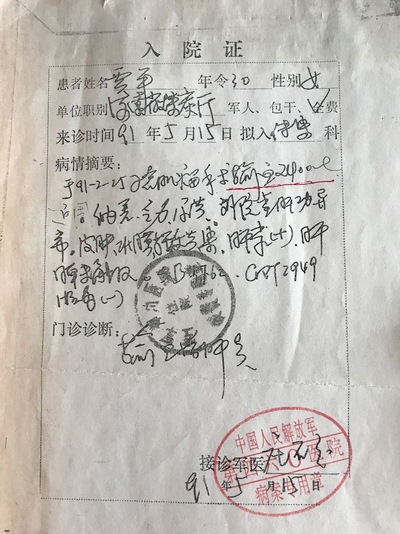 A copy of Ms. Jia Ping’s “proof of hospitalization” issued by the PLA Air Force hospital in Zhengzhou.

“Many patients in the hospital had similar symptoms. In those years, many people contracted liver diseases from blood transfusions but the hospitals could not diagnose the disease. They termed the symptoms, “blood transfusion hepatitis.” My doctor told me it was not easy to treat my illness. They could only control the enzyme levels. My doctor said it usually progressed to hardening of the liver and I might live for another 10 years. She recalled that the best medication used to treat hepatitis C was insulin.

Ms. Jia also went to see the best doctors of Traditional Chinese Medicine (TCM). Every time she visited a TCM doctor, she took home 12 bags of Chinese herbs. She drank large bowls of herbal medicines every day and felt as if she was soaked in medicinal drinks.

“Countless tragedies were caused by that man-made disaster. The authorities persecuted those who exposed the truth about the ‘blood plasma disaster’ and many were forced to relocate to avoid persecution.

“I sought treatment everywhere. When Western medicine didn’t work, I tried Chinese medicine. I took countless pills and received treatments repeatedly. My symptoms kept recurring. Sometimes they were severe, sometimes mild. They were never entirely eradicated.” Jia Ping’s complexion became sallow and she became very weak due to the illness and the side effects of all the medications she took. She became very irritable at times and felt like she was just waiting to die.

From childhood, Jia Ping was taught to be an atheist and embrace materialism. She did not believe in anything that could not be explained by science. But when Western medicine could not alleviate her pain, she thought about practicing qigong or Buddhism.

“My mother started to practice Falun Dafa in 1995 and felt it was excellent. She suggested I give it a try. Many people in China practiced Falun Dafa then. Word spread quickly about the extraordinary health benefits of the practice. This boosted my confidence.”

Practicing Falun Dafa was tough for Jia Ping in the beginning. “I could not even stand for half an hour. I could not pull my legs up in the sitting meditation. Luckily many practitioners lived nearby. We watched Master Li Hongzhi’s (Falun Dafa's founder) taped lectures and read Zhuan Falun together. Gradually, I realized that cultivation is not for treating illness. My illness was caused by my karma. In true cultivation practice, one must improve one’s character through cultivation and be a good person.”

Jia Ping resolved to sincerely cultivate herself. She persisted in doing the sitting meditation exercise no matter how painful it was. Soon after, the secretions in her respiratory system decreased and then completely disappeared. She recovered from her stubborn respiratory disease. She experienced what it was like to breathe freely. She said excitedly, “It was as if I was reborn.”

As she continued to practice cultivation, Jia Ping’s health was completely transformed. All her stubborn illnesses disappeared. When she was in her best cultivation state, she felt as light as a swallow.

However, the greatest benefit that Falun Dafa cultivation practice brought her was the improvement in her character. She followed the principles of Truthfulness, Compassion, Forbearance in her daily life. She became forgiving and even learned to be kind to others.

Jia Ping’s mind felt clearer and she became quick-witted. “With a healthy body, peaceful countenance, and agile mind, I excelled at work. To improve my job skills, I obtained an on-the-job master's degree,” she said.

Jia Ping has been practicing Falun Dafa for 25 years. She counts herself extremely fortunate to have found this spiritual practice. “From the first day I began practicing, I never took another injection or a pill. My life has been completely changed.”

Jia Ping moved to Toronto, Canada in 2008. She joined the Tian Guo Marching Band formed by local Falun Dafa practitioners. The band is often invited to participate in events held around the city. “In the bitter winter or sweltering summer, my stamina is good. I just lift my legs and march. No matter how far I need to travel in a car, I don’t get dizzy. I am also not afraid of the cold. This was impossible in the past. I enjoy great health and I'm truly reborn, something I couldn't imagine before!” 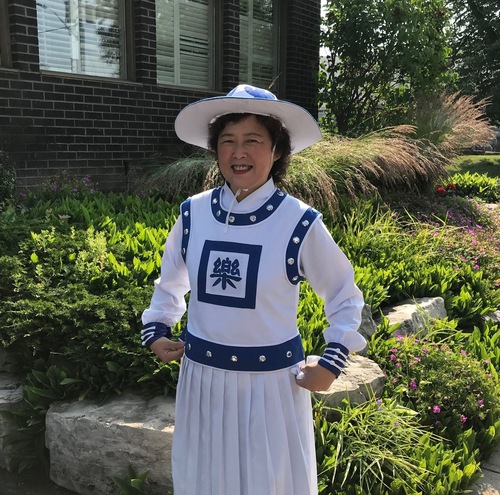 Jia Ping is happy to participate in the Tian Guo Marching Band.

“How lucky I am. My only wish is to cultivate myself and be a better person. I thank Falun Dafa for giving me a new life.

“Now that the CCP virus is constantly mutating and there is no effective cure, shouldn’t we open our minds and find out about Falun Dafa? Currently, it is practiced in over 100 countries and regions worldwide. Yet it is brutally suppressed in China—the country where it was first taught publicly. Falun Dafa has created countless miracles in resolving illnesses and improving people’s health.”

Also known as Falun Gong, Falun Dafa is a spiritual practice that millions around the world have made a part of their lives. It consists of two main components: self-improvement through the study of Dafa’s teachings and five gentle exercises and meditation.

Falun Dafa's belief system offers the possibility of spiritual growth through disciplined practice. Learners are encouraged to let go of unhealthy attachments as they strive to attune their lives to the qualities of the universe: Truthfulness-Compassion-Forbearance.