(Minghui.org) Today's news from China includes incidents of persecution that took place in 22 cities or counties in 11 provinces, where at least 31 practitioners were recently persecuted for their belief. 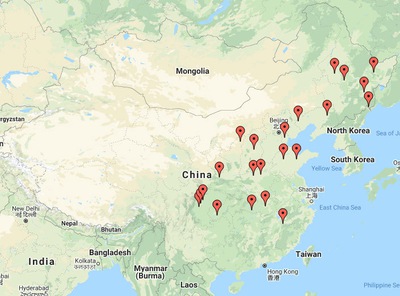 Ms. Yan Hongmei was persecuted to death in the No. 6 Ward in the Chengdu Women’s Prison on December 28, 2017. A month before her death, guard Zhao Hongmei ordered inmates to force-feed her dog feces.

Ms. Hu Xia was persecuted to death on December 19, 2017. While she was alive, guards ordered inmates to drag her by her feet with her head against the ground to the workshop, and back to her cell after work. In winter, the guards had inmates pour cold water on her comforter. They locked her in a reading room alone and blew chilled air on her.

An inmate who was imprisoned for 15 years in the No. 6 Ward said she witnessed more than 100 practitioners being persecuted there.

During the pandemic in 2020, newly appointed warden Wei Yuchuan and reform warden Deng Xiaogeng of the Hulan Prison have implemented strict management against imprisoned practitioners. Guards force practitioners to sit on tiny benches every day and deprive them of family visits. Criminal inmates families' are allowed to send food to the prison, but practitioners' families cannot.

Practitioners who refuse to transform are locked in isolation cells in the Strict Management Ward. Ms. Yu Baoqing of Shuangcheng City is locked in an isolation cell for refusing to give up her spiritual belief in Falun Gong. She has severe psoriasis and guards cap her monthly necessaries spending to 100 yuan even though it is his own money.

Ms. Zhang Xia was arrested in March 2021. Her whereabouts are unknown.

Ms. Xiong Hanlian disappeared on March 23, 2021, and her whereabouts are unknown.

Mr. Lin Decai was phoned by Xiong Ying, a clerk from the Lijiatuo Street Office Safety Office, on the morning of March 29, 2021. Xiong said that He Jiansong, secretary of the Political and Legal Affairs Committee in the office, wanted to have a private talk with him and promised not to pressure him to give up Falun Gong.

Mr. Lin arrived at the office around 7:00 p.m after work. The talk started after Xiong and He called in director Ji from the Lijiatuo Police Station, officer Jin Jianming who was in charge of the household register, and two clerks from the Safety Office. They demanded he give up Falun Gong and sign five statements renouncing Falun Gong. They threatened him and said that if he did not sign, they would go to his child’s high school, pressure the child, and make the child perform poorly in the college entrance exam.

Mr. Yu of Yingtan City, (first name unknown), and his wife temporarily stayed with their son in another city. Party members harassed the son and made him pressure his parents into signing a statement renouncing Falun Gong. The elderly couple refused. The son began slandering Falun Gong.

The couple had to leave and returned to their home in Yingtan City. Officers and community clerks came to harass them as soon as they arrived home. The harassment continues. The couple now lives in fear. Their relatives and friends dare not visit them.

Ms. Song Qi, 71, was arrested at home by five officers from the Daguanyuan Police Station on March 21, 2021. The officers brought a search warrant, ransacked the place, seized more than 100 Falun Gong books, over 10 Falun Gong pamphlets, and several cards with QR codes. An officer took photos of the license on her electric bike. She was taken to the police station for interrogation, and fined 500 yuan for “disturbing society.” She was released at 2:30 a.m.

Ms. Li Kun and her husband have been receiving harassing calls from her boss, secretary Jia Qiusheng of the Refining Tests of Quality Inspection Center, Daqing Petrochemical Company, since August 2020. The harassment is a part of the zero-out campaign, a concerted effort to force every single practitioner on the government’s blacklists to renounce Falun Gong. Jia called her husband at work again on March 26, 2021, and demanded he sign a blank sheet of paper. Her husband refused.

Ms. Wang Cuiling is taking care of her elderly parents in another city. Jia Qiusheng called her husband’s work unit and told them to call her son who lives in Chongqing, even though her husband passed away 10 years ago.

Mr. Hu Zhonghou, in his 70s, was repeatedly harassed by community clerks. The clerks ordered him to sign the three statements. They threatened him that if he did not cooperate with the “zero-out campaign” he would jeopardize his grandson’s application for civil service and another grandson’s preschool education. Mr. Hu has been harassed at home and received harassing calls from officers from the Domestic Security Division and the police station, as well as community clerks since the Chinese New Year. His mother, in her 90s, lives with him and is frightened.

Wang Tianliang (gender unknown) was arrested by officer Chang Hongbin and others from the Yanshi City Domestic Security Division. Wang’s family appealed for Wang’s release several times. Chang and the officers not only ignored the family’s requests but also went to Wang’s home to harass the family and threatened to arrest them.

Ms. Sun Shujie was called to the Lixin Police Station for a talk on March 30, 2021. When she arrived at the police station, she was told that she was formally arrested, and given a physical exam in the Mineral Center Hospital. Even though her blood pressure was over 200, she was taken to a detention center. Guards refused to take her in after they took her blood pressure again and found it was very high. The officers then drove her to the court. The court placed her under house arrest. A hearing is scheduled this week.

Ms. Zhang Xiuying was arrested by officers from the Xiaojingyu Criminal Brigade on the afternoon of February 11, 2021, for talking to people about the persecution of Falun Gong. Police ransacked her home and seized her computer, books, and other items. The Wanbolin District Procuratorate issued an arrest warrant before March 10.

Ms. Zheng Guicheng works as a taxi driver. She was arrested by officers from the Gaoxin District Police Department on the evening of March 24, 2021, for talking to passengers about the persecution of Falun Gong. Her home was ransacked the next day. Police seized 1,000 yuan in paper currency with Falun Gong messages printed on them, Falun Gong books, and copies of Minghui Weekly.

She was forced to take a physical exam on March 26. Her family was ordered to pay over 900 yuan. She has been held at the Changyi Detention Center.

Mr. Zhou Hongjun, 58, was arrested by officer Yi Bin and others from the county Domestic Security Division when he was teaching an art class in the Gongan County Experimental Primary School at the end of December 2020. He was taken to a police station for interrogation. At the same time, officers took away his cell phone and house key. Yi and a community clerk ransacked his home and seized a photo of the founder of Falun Gong and over 20 Falun Gong books.

Officers took him to the county People’s Hospital for a physical exam the next day. Guards did not admit him to the detention center because of his high blood pressure. He was released 20 hours later.

Yang Bailiang (gender unknown) of Qingyuan County was arrested at home by officers from the Tieling City Police Department and the Hongtoushan Town Police Station on the evening of March 30, 2021.

Ms. Jing Xiuqin, about 70, of Xingyang City was arrested by officers from the Xingyang City Domestic Security Division and the Jingcheng Police Station in June 2020. She was held in the Zhengzhou City No. 3 Detention Center. It was recently learned that she was sentenced to three and a half years in prison and fined 30,000 yuan by the Zhongyuan District Court. She is imprisoned in the Xinxiang Women’s Prison.

Ms. Chen Daoxiu was harassed in her food shop by officer Li from the Chengbei Police Station on March 31, 2021. Li seized her Falun Gong books, a media player, and other items.

Huo Dong (gender unknown) was arrested by officers from the Beijie Police Station after someone reported Huo for talking to people about the persecution of Falun Gong on March 29, 2021. Huo is being held in the Lingyuan Detention Center.

Officers from the Chengbei Police Station went to the home of Xu (first name and gender unknown) in mid-March 2021. Xu was not at home. They told Xu’s family member that they would take something. They seized about 10 Falun Gong books, a photo of the founder of Falun Gong, and several discs. They took photos of the items and took the family member to the police station.

Mr. Yang Zhiling was repeatedly harassed by officers from the Beichen Police Station and Tianmu Town since March 2021. Mr. Yang’s wife could not take the mental pressure and threw him out of their home. The officers also pressured his work unit and made him lost his job.

Ms. Dong Guiyan and her daughter were harassed. The officers continually knocked on their door, stalked them, and harassed them at work. Ms. Dong’s husband had a heart attack on the scene and was sent to hospital for emergency rescue. He is still hospitalized.