(Minghui.org) Today's news from China includes incidents of persecution that took place in 18 cities or counties in 8 provinces, where at least 27 practitioners were recently persecuted for their belief. 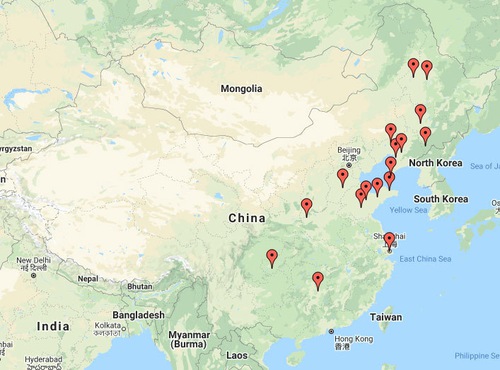 The wife of Mr. Gong Fang’ai from Yuezhuang Village, nearly 80, was taken to a brainwashing center by a village communist member Gong Maoju and the village official Gong Weirong around March 20, 2021. She had been taken for a blood sample and physical examination. She has returned home.

Mr. Lu Jianming and his wife live in Luzhuang Village, Jiangheliu Township, Jin County. They were reported to police for talking to people about Falun Gong and were arrested by officers from Gucheng County on the afternoon of April 1, 2021.

Their home was ransacked by officers from Jin County Police Department, led by Cao Guang, deputy of Jin County Domestic Security Division. The couple are still under detention.

Ms. Zhang Lirong was harassed at home on the morning of March 30, 2021. Two people from Tonghua City “610 Office” and the staff members from the Jianhe Community came to her home and tried to take photos, but Ms. Zhang stopped them.

They threatened her with her retirement and her children’s future if she continued to practice Falun Gong. A police officer and the staff members from the Jianhe Community came to Ms. Liu Fengying’s home and later to her daughter’s workplace in January 2021.

Her daughter was told that her mother would be sent to a brainwashing center and she would lose her job if her mother continued to practice Falun Gong.

Ms. Zhang Fengrong’s family was harassed by staff members in the Liujia Town Comprehensive Management Office in February 2021. They threatened to cancel the land lease contract and to revoke the household registration if Ms. Zhang didn’t sign the three statements.

Mr. Guo Jingshan, in his 60s, went to Daqing City with his wife to take care of their grandson. Several officers from Fuyu County came to Daqing City and arrested Ms. Guo at his son’s home on March 31, 2021.

They claimed that they discovered Mr. Guo missed two months of a jail term when he served his jail sentence several years ago for practicing Falun Gong. He was illegally detained again and will be brought to jail to finish his term.

Ms. Cao Yanchun from Laishan District was arrested and is now detained in Muping Detention Center.

Ms. Wang Zhongfang lives in Diaoyutai Village, Yunshan Town. She was arrested on the morning of March 31, 2021. Her whereabouts are unknown.

Ms. Zhang Yuxia from Honghai New District was arrested by Dalian City police on April 1, 2021. It is unknown where she is currently detained.

Ms. Qiu Jianying from Pudong New District was arrested by a dozen officers on the afternoon of March 24, 2021. The officers informed her that she was under criminal detention around 10 p.m. that evening and is currently detained in the Pudong New District Detention Center.

Ms. Zhou Guihua was harassed at home by two officers from the Nanguan Police Station on the morning of March 31, 2021. They left after Ms. Zhou talked to them about Falun Gong.

The two officers then went to Mr. Lu Hongyue’s home. Mr. Lu was not home.

They broke into Mr. Lu’s bedroom and took away one Dafa book, a media player, and two copies of Minghui Weekly and Zhengjian Weekly.

Ms. Yin Changhua had an appointment at her sister’s home with two officers from the Wujing Police Station around 3 p.m., March 31, 2021. Ms. Yin talked about the fact that her sister recovered from 6-cm liver tumor by reciting the words “Falun Dafa is good; Truthfulness-Compassion-Forbearance is good.”

The officers recorded the conversation and left.

Mr. Du Xingji was recently harassed by the county political and legal affairs committee, the No. 2 Police Station and the Market Supervision Administration Office. He was threatened with a jail sentence and losing his government job.

Tang Canchun (gender unknown) was harassed at home by Xiao Li from Shigu District Domestic Security Division and two officers from the Wuyi Police Station on April 2, 2021. They took photos in every room and questioned whether Tang had made Falun Gong materials and contacted any other practitioners.

Ms. Xu Guilian was arrested at her mother’s home by several officers from the Jinzhouzhanqian Police Station on March 31, 2021. Her home was ransacked.

The personal property including Dafa books, a desktop computer, and a laser printer were taken away. Ms. Xu was taken to the Yaojia Detention Center on April 1, 2021.

Ms. Su Caiyun and Cui Feng (gender unknown) from Fumeng County did not return home after going out on March 29, 2021. Their family members found out on March 31, 2021 that they had been arrested by officers from the Changyingzi Police Station and detained in the Fumeng County Detention Center.

Ms. Zhang Wanling from Fuxin City, was arrested by officers from the Fuxin Railway Police Station on March 31, 2021 for carrying Falun Gong books and an MP3 player when taking a train ride.

Mr. Bai Xuesong discovered the fabricated transcript from the Fanrong Police Station in Tiexi District when meeting his lawyer for the second time on April 1, 2021.

After Mr. Bai was arrested on January 20, 2021, during the interrogation on the evening of January 20 and on January 21, because he didn’t cooperate, he was badly beaten, and was slapped in face and struck on the head.

Mr. Bai has been detained in the No. 2 Detention Center for nearly one month. His case is now with the Lishan Procuratorate.

Mr. Jiang Zhongbi was stopped by six plainclothes officers at the gate of the residential compound on March 17, 2021 when she came back from the morning market. They held her and came to her home.

Then two more officers from the Nanping Police Station and the local community office came. Eight officers ransacked her home.

Ms. Jiang was taken to the Nanping Police Station for interrogation. They showed her some videos such as posting letters in the mailbox and asked Ms. Jiang to identify the people in the videos.

Ms. Jiang told them she didn’t know anyone on the video. Ms. Jiang was released at around 8 p.m. that evening.