After Numerous Arrests and Incarcerations, 46-year-old Woman to Serve Another Four Years for Her Faith

(Minghui.org) A Falun Dafa practitioner in Zhuzhou City, Hunan Province, was admitted to Hunan Province Women’s Prison on March 1, 2021, to serve four years for her faith.

Falun Dafa, also known as Falun Gong, is a spiritual discipline that has been persecuted by the Chinese communist regime since 1999.

Ms. Liu Chunqin, 46, was arrested on May 27, 2020, for talking to people about Falun Gong. The Lusong District Court appointed a lawyer to represent her without her consent. The lawyer was instructed to plead guilty on her behalf. At her family’s strong protest, the judge agreed to dismiss the court-appointed lawyer and allowed Ms. Liu’s own lawyer to enter a not guilty plea for her.

When Ms. Liu’s lawyer went to Zhuzhou City for her hearing on October 29, however, the police arrested him and the hearing had to be canceled.

Ms. Liu was secretly tried on November 6 without legal representation and sentenced to four years with a 5,000-yuan fine. She appealed the verdict, but her appeal was turned down by the intermediate court in December.

Prior to her latest sentencing, Ms. Liu, who used to work at the Hengyang Steel Rolling Factory, has been repeatedly arrested, incarcerated, and tortured over the past 22 years for upholding her faith. Her mother and younger sister, who also practice Falun Gong, weren’t spared either. At one point, all three of them were detained and tortured in the same labor camp.

Mother and Daughter Imprisoned Together

Shortly after Ms. Liu Chunqin's mother was released, she was arrested again for putting up informational materials about Falun Gong and sentenced to four years.

Two years later, in September 2002, Ms. Liu was also arrested and sentenced to four years. Both she and her mother were incarcerated in Hunan Province Women’s Prison.

Mother and Two Daughters in the Same Labor Camp

Ms. Liu Chunqin's mother was arrested one more time, in May 2005, five months after she was released. She was given two years in the Baimalong Women’s Forced Labor Camp, where she was tortured for upholding her faith. The guards once forced her to stand for an extended period of time and caused swelling in her legs and back.

Two months after Ms. Liu Chunqin was released from Hunan Province Women’s Prison, in November 2006, she was arrested for talking to people about Falun Gong and given one year in the same Baimalong Women’s Forced Labor Camp, where her mother was detained.

In the labor camp, Ms. Liu Chunqin was constantly beaten by the guards. They once hung her up, beat her, and stuffed her mouth with a used sanitary napkin. She also had her mouth taped shut and was handcuffed behind her back. 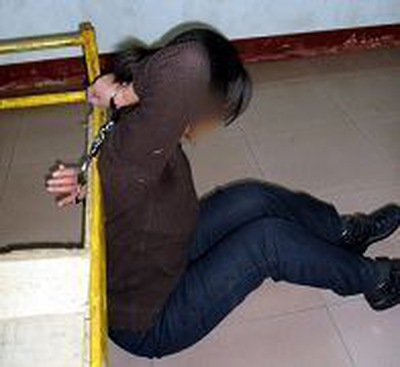 In April 2007, her younger sister, Ms. Liu Xueqin, was arrested and taken to the same forced labor camp as her mother and sister.

Both Ms. Liu Chunqin and her mother were arrested one more time, on September 15, 2011. While her mother was later released, Ms. Liu was given another one-year term in Baimalong Women’s Forced Labor Camp.

Because she refused to squat or answer roll call in October 2011, the guards beat her three times in a day. Despite the injuries to her legs, she was forced to stand overnight and not allowed to sleep.

Ms. Liu Chunqin was arrested again on April 24, 2016, for talking to people about Falun Gong and detained for five days.

Her next arrest was on June 21, 2017, for distributing informational materials about Falun Gong. She was held in the Zhuzhou City No.2 Lockup for 15 days this time.

Two months later, on August 24, 2017, the police took her back into custody and detained her for another 15 days after finding out she had spoken to people about Falun Gong two weeks before.

Family Torn Apart as a Result of the Persecution

The Persecution of Liu Yongfen and Her Family in Zhuzhou City, Hunan Province

Mother and Daughters Repeatedly Imprisoned During the Past Eight Years